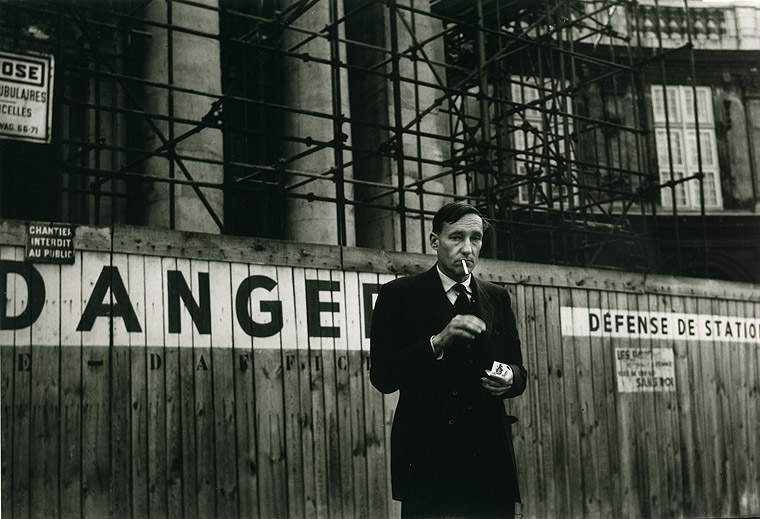 I can feel the heat closing in. Feel them out there making their moves, setting up their devil doll stool pigeons, crooning over my spoon and dropper I throw away at Washington Square Stationâ€¦

It is the beginning of a marathon reading of the entirety of William S. Burroughs' (in)famous novel, Naked Lunch.Â The happeningÂ at a Bloomington cafeÂ in early December kick-started the Burroughs Century, a festival slated for February to celebrate what would have been Burroughs' 100th birthday.

Naked Lunch demands silence from the reader, otherwise he is taking his own pulse.

Charles Cannon, one of the organizers of the Burroughs Century, asserts that the reading was in the spirit of Burroughs' status as a spoken word artist. "Before I ever read Naked Lunch," he said, "I heard Burroughs reading it [on tape]." Reading and listening to the novel aloud is an experience, he avows, and not one for the faint at heart. "Naked Lunch really is an assault on the senses, and hearing it read is simply not the same as sitting at home in your easy chair, or sitting in the coffee shop."

Indeed, Naked Lunch is known for its bewildering structure and lack of conventional plot. Cannon argues that reading it aloud is getting to the root of Burroughs' intention to force his readers to think about how language and plot typically function.Â Parts of the novel are so seemingly illogical, he concedes, that

when reading it aloud, you have to repress a certain instinct within yourself. You have to fight that urge in your own mind â€“ you want it to make sense â€“ but sometimes, you simply have to present his words as they are written. Burroughs and a number of authors who were influenced by him refuse to write logically.

Burroughs undermined conventional language not only in his written work, but also in his work as a spoken word artist. Cannon says that in the mid-1960s,

he began experiments with tape manipulation. Some of the recordings that came out in the 1970s were Burroughs, Brion Gysin, and another collaborator of theirs, Ian Sommerville, just experimenting with reel-to-reel tape recorders â€“ recording street sounds, recording Burroughs himself reading, recording the sound of television from the other room. And splicing tape back & forth, recording from one recorder onto another, in part just to see what they would come up with, but also trying to create new forms of communication.

Burroughs described this process â€“ something his friend Gysin invented and christened the "cut-up method" â€“ in one such tape:

Brion copied out phrases from newspapers and magazines, then took his scissors, and cut these selections into pieces, and rearranged the fragments at random. The next step was cut-ups on the tape recorder, and Brion was the first to take this obvious step.

Burroughs wanted to ... dismantle language, and to look at the way that language is used to influence and control people.

Burroughs' experimentation with splicing words and rearranging them to make new, often illogical phrases stemmed from more than just artistic creativity. Like other artists and writers of the postmodern era, Burroughs had a deep suspicion of language â€“ and the cut-up method was one way of expressing this suspicion. Cannon claims thatÂ Burroughs had a broader goal â€“ to challenge language as we know it and push towards "new forms of communication."

"We have to think about his literary techniques, and the reason that he pursued them," Cannon asserts.Â "Burroughs was very interested in the subject of control, and one of the things that he wanted to achieve was to dismantle language, and to look at the way that language is used to influence and control people." The cut-up method (which Burroughs employed throughout Naked Lunch) is intended to destroy language, to underline the fact that even though language is arbitrary, it can be used for coercive purposes. Cannon suggests that reading Burroughs' works aloud emphasizes this even more, since you become more conscious of language when it's out loud.

Everything that Burroughs did, Cannon notes, was aimed towards

that larger purpose of making you aware of language, making you aware of what words are doing, and to dismantle them, to take them apart. These are sections of text that are literally cut up from other textsâ€¦so when you hear him reading it, he's not reading a logical sentence, in the way that we're used to.

This goal of making the audience hyper-aware of language, Cannon claims,Â is one of the things that makes Burroughs distinct from other spoken word artists of the era.

His novels are not traditional, in any sense. Not in the subject matter, not in their form. The combination of his voice and his entirely unique way of presenting his own work, the way that he harkens back more to vaudeville than he does to a poetry reading â€“ I think he created a new form.

Towards the end of Naked Lunch, Burroughs indirectly addresses readers, informing them that "â€¦Naked Lunch demands silence from the reader, otherwise he is taking his own pulse."

Burroughs' obsession with undermining conventional language, according to Cannon,Â worked in conjunction with another obsession â€“ silence.

Burroughs is strange in that he's a writer and a spoken word artist â€“ he is a man who lived by words, and yet he never completely trusted them. So, what is Burroughs reaching toward? Well, he says over and over again, what he's reaching for is silence, which is a very strange thing for a writer to say.