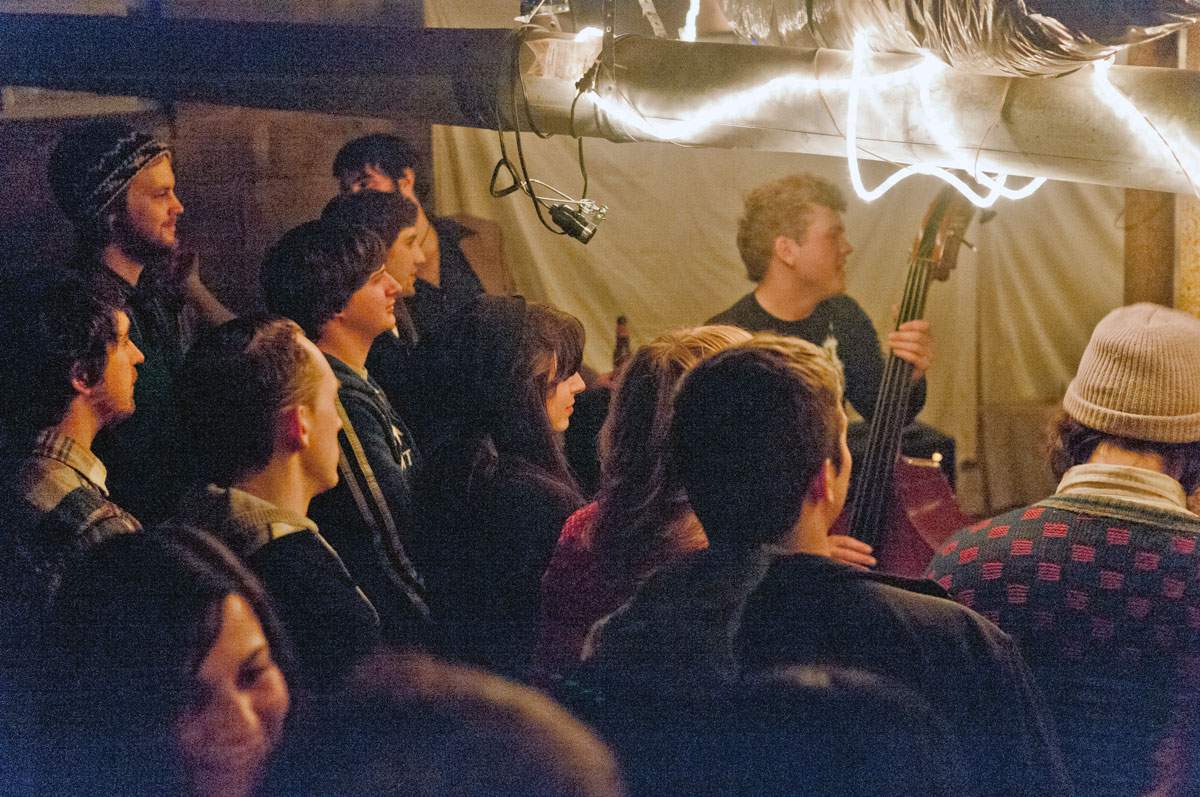 The capacity at the IU Auditorium is 3,200. The Buskirk-Chumley Theater can accommodate 640. The Bishop has a cap of 200.

The washer/dryer is on one end of the room; the bands sets up underneath the staircase; and the audience gets cozy with the poles, low slung pipes and dips in the floor. He's been throwing house shows for seven years, although he just moved into his current rental house.

His house isn't easy to find. Like many hosts for house shows, he doesn't advertise the address. Instead, houses have nicknames so people in the scene know where to go. It's a form of crowd control and it helps them keep a low profile in anticipation of noise violations.

"This house actually doesn't have a name yet," says Duncan. "I don't mind not having a name, but a lot of people are like, 'Come on, you've gotta get a house name! Like, what's the deal with that?'"

No address, no house name. How do you find the show? This is a community that thrives on word-of-mouth advertising. Want to break into the scene? You have to know somebody. Perhaps it's gotten so exclusive that even Bloomington insiders don't know about house shows.

"It seemed like the house shows stopped for some reason, or slowed down significantly," says Dan Coleman. He books talent for the Bishop and he's the owner of Spirit of ‘68 Promotions. He connects attendance at shows with interest in local bands, both of which he thinks are down right now. But that's not what Natascha Buehnerkemper has observed.

There will never be anyone turned away from a house show as far as I understand. No one's ever going to be standing at the door saying no you can't come in if you can't afford it or if you didn't bring any money. The goal is to have people there experiencing music.

"There are so many house shows happening in Bloomington it seems like every band will play at least one," she says.

I tried to attend the last house show she threw. I saw the event on Facebook. It started at 8:00pm. I contacted a friend in the scene who knew where the house was. When we arrived, it was dead. Apparently there was another show happening at another house that same night, so Buenerkemper's show started several hours late. She says this is a pretty common thing in the house show world.

Come One, Come All

Eventually, about 50 people attended this free, all ages event two characteristics that make house shows special in Bloomington. Many commercial venues are 21-and-over and they almost always charge a cover.

"There will never be anyone turned away from a house show as far as I understand," she says. "No one's ever going to be standing at the door saying no you can't come in if you can't afford it or if you didn't bring any money. The goal is to have people there experiencing music."

There's usually a suggested donation that the hosts collect by passing a hat around. All the money then goes to the bands, especially if there are any out-of-town groups on the bill.

Buehnerkemper is also a member of the band Ray Creature. Being a local musician, she never gets paid to play a house show, but she says the point of music for her doesn't have anything to do with money:

My mom is constantly asking me, 'Did you guys make money at that show, how much did you guys get paid?' That's never really been a concern for me... It's really been rewarding for me just to be connected to the scene and make friends and talk music. It's such a great community here. It's like nowhere else I've ever lived.