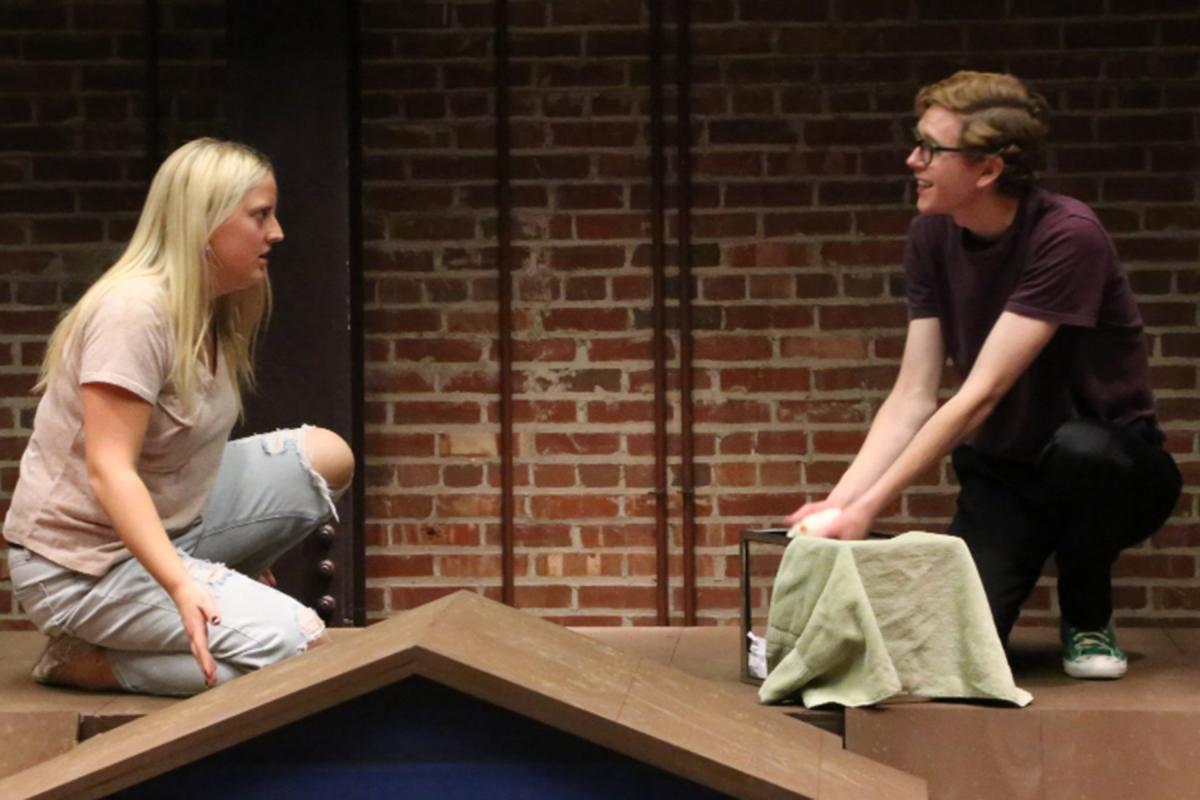 The IU Department of Theatre, Drama and Contemporary Dance's From the Ground Up series offers Ascendant a play devised by Peter Gil-Sheridan directed by Jonathan Michaelsen. The play, with a mix of students and faculty members, skillfully explores the variety of pressing problems of addiction in a small Indiana town.

The play opens with the cast facing into the roof top set and chanting what might be a hymn and it turns out to be a paean to their addictions.

Then it's an intimate scene with Carolyn Stouder as Chrissy and Cameron Barnett as Zachary. They're currently almost edenic. In a humane gesture, Zachary has adopted a rat that Chrissy wants not part of. Later it'll be smoking, sniffing and injecting as they sink into hopeless addiction.

The roofers, led by the upwardly mobile JoJo, Christopher Plonka with Eb, Nick Folley and Lee Michael Bayler are more or less on the job. JoJo who'll begin his descent with pain killers is a high school buddy with Lee who's already having trouble with alcohol and Eb who smokes to take the edge off. The three look a bit like a coherent crew. They're working for motherly Elaine, faculty member Nancy Lipschultz. Elaine stoutly maintains that her overdosing son died of drowning in the bath tub. Her addiction is hoarding.

The innocent of Ascendant is Mary Wilson as Chassidy. Chassidy's father is Paul, faculty member Kenneth L Roberson. His alcoholism is fueled in part by PTSD from the military. Although Chassidy is a sugar addict, her watchword for all is moderation. She counsels her more than human father, Paul to avoid vodka and stick with beer. It's not advice that an addict can embrace.

The optimistic Chassidy abandons the temptations of a bakery and comes to work with the crusading Katy, Anna Doyle. Despite the barrage of desperate phone calls, she's still a moderate. Katy is from the town and six years sober. She's working hard to help her friends, people that she partied with, drank with and grew up with. Katy's also working for the community but she's still tempted.

It sounds as if I've described Ascendant in a way that might be downer or even a somewhat carelessly organized set of scenes, and that's not the case. Peter Gil-Sheridan has crafted a wonderfully intricate play. Each character has an addiction, but they're all so warmly human that I felt for each of them. They were, as Katy says, "good people with an illness."

Spencer Gjerde' scenic design of the roof top and its transformation to a home, an office, etc, serves the production well. Jason Orienko's costumes wonderfully echoed the characters of the actors. Lee Anne Meeks lighting showed us what to watch and sound designer Naomi Gold's choices of familiar and unfamiliar country classics amplified the play's messages.

Jonathan Michaelsen has staged the show in a compelling manner with lots of variety. The complicated wild drug melee in the second act is so cleverly done and executed that I'd like to revisit it.

You can find my reviews and an interview with playwright Peter Gil-Sheridan and director Jonathan Michaelsen at wfiu. org/arts