Artist In The Making: Kelsey Adams And Tony Ardizzone 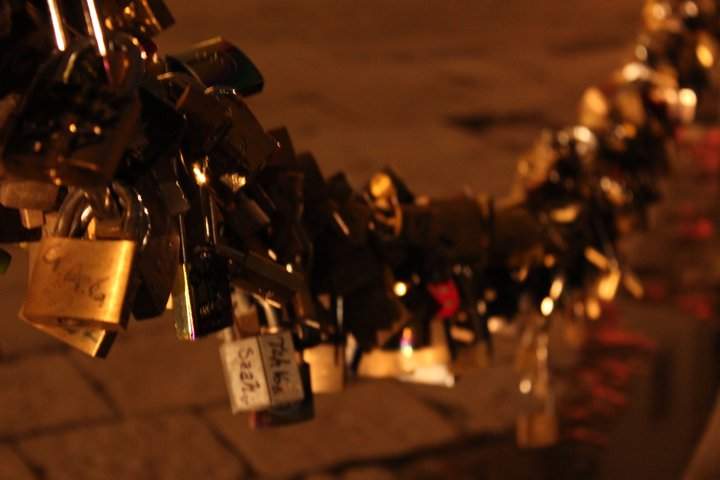 Kelsey Adams is an Indiana University senior majoring in English, with a concentration in creative writing. Artworks' Rachel Lyon followed Kelsey to a meeting with her thesis advisor, novelist and professor of creative writing Tony Ardizzone.

The Story In Question

It's a Friday afternoon in February. Kelsey enters Tony's office having just defended her story, "The Man Collector," to her thesis committee. It's a story about a woman named Ellis who travels to Florence to meet the mother of her ex-boyfriend, Mark, who died in a car accident.

"For the most part," Tony begins, "we've got Ellis, traveling by herself-marvelously-through a landscape, and interacting with a lot of people, under the umbrella of your opening sentence:

When Ellis sent Mrs. Stanton, Mark's mother, a postcard after arriving in Pamplona, all it read was "Love Spain. People and food are muy bueno. Never coming home. Hope you are well." There was a winky face after "home." Originally, she had written "people and food are delicious," but had scribbled it out with deep black lines.

Okay, so we've got this connection that they have, and then we get, later, the response that she's coming to see her and that she'll pay her way. And Mrs. Stanton? Look at her name-it's more staunch-she wants this daughter-in-law of sorts, right, to maybe still be wearing the hair shirt and ashes, the dark veil, the widow's weeds. Instead she comes, and here's Ellis!"

Since Mark's death, Ellis has moved on. She's seen other men. She's traveled.

At the beginning of the piece, Ellis puts a lock on a chain around a bridge. This is a common Italian practice. Kelsey explains, "When people are in love they'll go and they'll scratch their names or their initials onto the lock, and then they lock it and throw the key away, and it's like this lock will never be able to be unlocked, and so the love will last forever."

"Florence is famous for it," Tony adds.

"I mean think of it," Tony agrees. "To reach the point in a romance when the two of you then buy a chain and a lock, and then scratch your initials and have the key, you know? Link it and lock it and throw the key in the river and, oh! With the water? What a lovely way to celebrate!"

The question this Friday is-as it often is, in meetings like this-what is going on with the ending of this story? "I thought that the main issue here involved the ending," Tony says, "but you see that if she returns to the lock, that might be a way of her resolving whatever issue or problem that she has."

"There are different things I've considered," Kelsey replies. "I have considered going back to the lock. And I've considered having her go with Mrs. Stanton and having Mrs. Stanton do a lock as well, or having her go back and find that the lock has been cut." Kelsey's reluctant to decide on a real ending right this minute. "I do want to let it sit for a while," she says. In the mean time, Tony gives her the encouragement she needs to let it percolate.

"Let's not get too philosophical here," he begins, but corrects himself: "Oh, boy, I'm going to get philosophical! Mark's death frees her in a way: If Mark can die, anybody can die. You might as well live. So forget convention; you might as well live. And what does it mean to live? It means to be alive. It means to dance because you can. It means to celebrate. It means, 'People and food are muy bueno. Never coming home. Hope you are well.' Alright? It's people and food. That's what this story is about. This story is about la dolce vita."

Tony's enthusiasm is a reminder that reading itself is an aspect of the sweet life, or la dolce vita. Whatever happens with Ellis and Mrs. Stanton and the locks, Kelsey leaves this meeting with her thesis advisor with a renewed awareness that she writes so that her work can be read with pleasure.