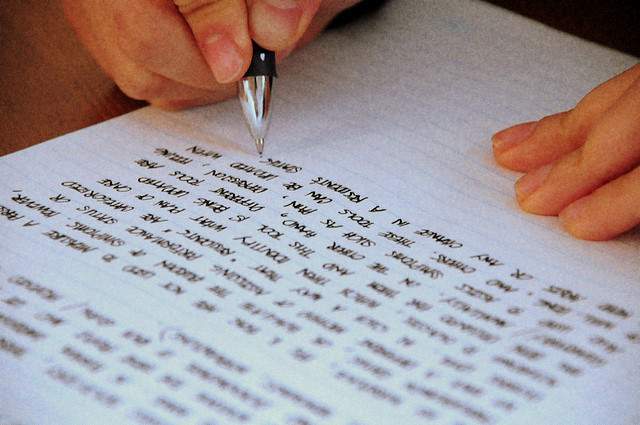 Of inexperienced writers, Flannery O'Connor once famously said, "Anyone who has survived his childhood has enough information about life to last him the rest of his days." But how does a young writer at the very beginning of her career believably evoke an older character, a character who's facing death? As part of Artworks' series "Artist in the Making," Rachel Lyon sat down with undergraduate writer Kelsey Adams to discuss the process of writing, and how Kelsey channeled a middle-aged woman in her story "The Cancer Lady."

On Becoming A Writer

Kelsey Adams: I am Kelsey Adams, I'm a senior here at IU, I'm an English major with a concentration in creative writing, and I'm originally from La Porte, Indiana, which is up in Northwest Indiana, the region.

Rachel Lyon: So here at IU you felt like you have become a writer. Can you tell me a little about that story, that experience?

KA: Here at IU is where I really began to feel as if I was a writer. I feel as if I've been writing my entire life, but the first time I ever had someone else read my work and critique it I began to see my own work from an objective viewpoint. Basically once I could see my own work and know what was wrong with it and what was really good about it, I realized that that's what I think makes you a real writer: when you can understand and evaluate your own writing.

RL: How would you characterize your work?

KA: It's very grounded in characterization and relationships between people, this kind of dry, almost dark humor at times that really explores deep issues, while still trying to be funny about it.

RL: Why is that kind of work important?

KA: Because you have to laugh at yourself. You can't go through life always feeling sad and depressed. You have to look at your situation in a weird light! I laugh at myself daily, and if I didn't I don't know how I would get through.

RL: Can you give me an example of that? What about this story that you brought today?

KA: This one started, they always tell you, 'Never write a cancer story.' But I did it anyway, because I was very intrigued by the idea that, what if someone has cancer, realizes that they've been cured, the cancer is gone, but they're not happy about it. What if you're not happy. What kind of person could be in this situation, and what kind of events could have led to these feelings?

He wakes me by kissing my shoulder blade, hard, so that his front teeth press into my bone. Curling his fingers around my hip, he pulls me back into him. It's been over three months, but I just can't do it. I feel as if I am filled with sand, the grains scratching just below my skin. An unpleasant sensation that makes me feel both immobile and transientâ€“ like the dunes guarding the Lake Michigan Shore. My bones come out at odd angles from my body, the discarded cigarettes and broken bottles of high school beach parties. And if I try to move, a bass starts thumping inside my head, wisping away layers of my sand to be carried to other dunes or down into riptide waters until nothing is left. He moves a hand between my legs, but I shake my head no. He rolls onto his back, throwing his arms into the air before letting them drop onto the bed. He pinches the bridge of his nose as if he can feel my migraine. Or, I suppose, has his own.

Letting Go Of Ego To Know Oneself

RL: How has your work changed over the course of your time here at IU?

KA: I think the major change has been that I have moved a little bit more toward having fuller characters. I started writing fantasy a lot in high school, and I think that explains a lot about my writing. This thing that's very plot-based. Like, before I started writing anything I would plan it out, event by event by event, so I never let my characters make any decisions for themselves. I always made the decisions for themthat's how the story was plotted, so that's how it was going to be for me.

RL: So how do you go from the sort of external storyteller who knows everything, to getting into your characters' heads? What's that process like?

KA: I think it took a lot of giving up my ego and letting go of who I am so that I can think more like the character. And in a lot of ways it's also being more honest with yourself, because there's some of me in every character I writemale, woman, no matter the agethere's a little bit of me in there, and sometimes the qualities aren't the greatest. But I think it's about recognizing characteristics and traits that you might have, and then amplifying them, and just saying, like, 'What would happen if..."

And after crying until my mouth was dry from dehydration, I laughed. I kissed him with cracked lips and slipped my hand down his jeans. He pulled my hand out and held it tight. At the time, I thought he did it because of the soon-returning doctor: in actuality, it was just the beginning of the porcelain-doll phase, when he barely touched me for fear of breaking me or smudging my fair skin. Which was really just the beginning of the sandbag phase when I ceased to be a woman and became an inanimate sack.