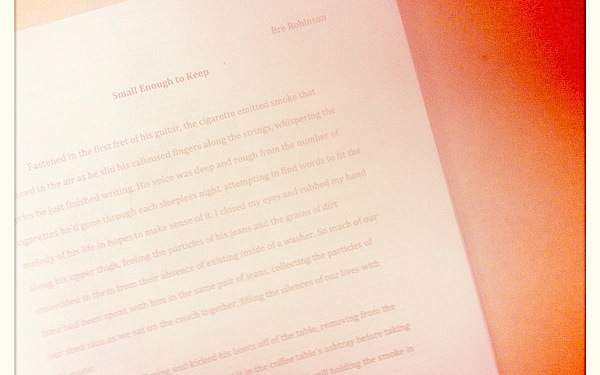 For this episode of WFIU's Artists in the Making series, producer Rachel Lyon followed Bre'Anna Robinson, an Indiana University junior, to her creative writing workshop taught by Jacinda Townsend. The story begins with one simple question:

Rachel Lyon: What's the story that you're workshopping today?

Bre Robinson: It's called "Small Enough to Keep." It's about a relationship where the guy is leaving, he's going across the country, and she's seeing him getting smaller. He shrinks by the end of the story. I like the outer story of the guy getting smaller, that's my favorite part about it. So we'll see what everyone else thinks about it.

Jacinda Townsend: Okay, so the first thing I want to talk about today is something that Bre did in her story, which is she inserted a little magical realism, which is one of my favorite things to talk about. So I wanted to talk a little about how this works, and how it might be better.

Bre: I think that at my age, there's not a lot of things for me to write about, I haven't experienced that much, so sometimes it feels like I could be telling the same story over again, and magical realism helps me write different stories and keep stories interesting to a certain degree, [rather] than just writing the same stories over again.

That's when I looked towards the ground and saw him there, small enough to pick up and hold in the palm of my hands. I bent down and picked him up, clasping my fingers around him. Not so tight as to squeeze him, but tight enough to hold onto him. I felt him for the first time in months, and I was taken back through our memories of two and a half years. My life spent with him, a trail of memories, ending with me holding onto him in my hand.

JT: Is this magical realism in the sense that this is really happening, or do you interpret the way she wrote this as, this is all a figment of her imagination?

B; It's interesting to hear how people read your story and your characters, because it can be entirely different from what you meant it to be. I thought that was an interesting take, that she imagined the entire thing. I never thought that anyone would read it that way, so it was different to hear that.

Classmate: If he really is shrinking like that, and she's actually losing her mind, kind of, then it makes me wonder if he was ever really there.

JT: Or if he's just some kind of muse that she's kind of made up for herself.

B: I think everyone reads things slightly differently, especially than the person who wrote it. It can be a little overwhelming deciding which ones are useful, or what your intentions are. You just have to learn to balance that out. So when I go back to revise, I'll take all of these comments and decide what direction I want to go and which things really do need to be worked on and kind of let the other suggestions go.

JT: This story, and those of you who've read it know, it's very, very interior. If he's shrinking, that adds a whole other layer to thisan absurd layer, but a layer nonetheless. But also, it forces them to have some conversations about what it means for him to disappear that I think the story is also lacking. It's often the case that when you put magical realism into your story, you'll force your characters to have these conversations that they otherwise wouldn't have.

B: I think I'm gonna take Jacinda's comment about having a conversation that centers the reader into believing that he is actually shrinking and develop that more.

And I continued to cry. Probably for hours. Long enough for him to become so small that he slipped from my fingers.

I don't know where he is right now. That night I think he slipped into the air, blowing whichever direction he was meant to go away from me. I've made time to listen to NPR every morning, hoping to hear his voice on the radio, so I can go over to the canvas still in the corner of my room and begin to paint.

B: The characters in your story, even if they are realistic, they are also not realand that's what fiction is, really. I always feel weird when I write and think about it, because I'm constructing this entire world in my head and writing it down, and so that just adds another element to it.

You can do anything with writing.