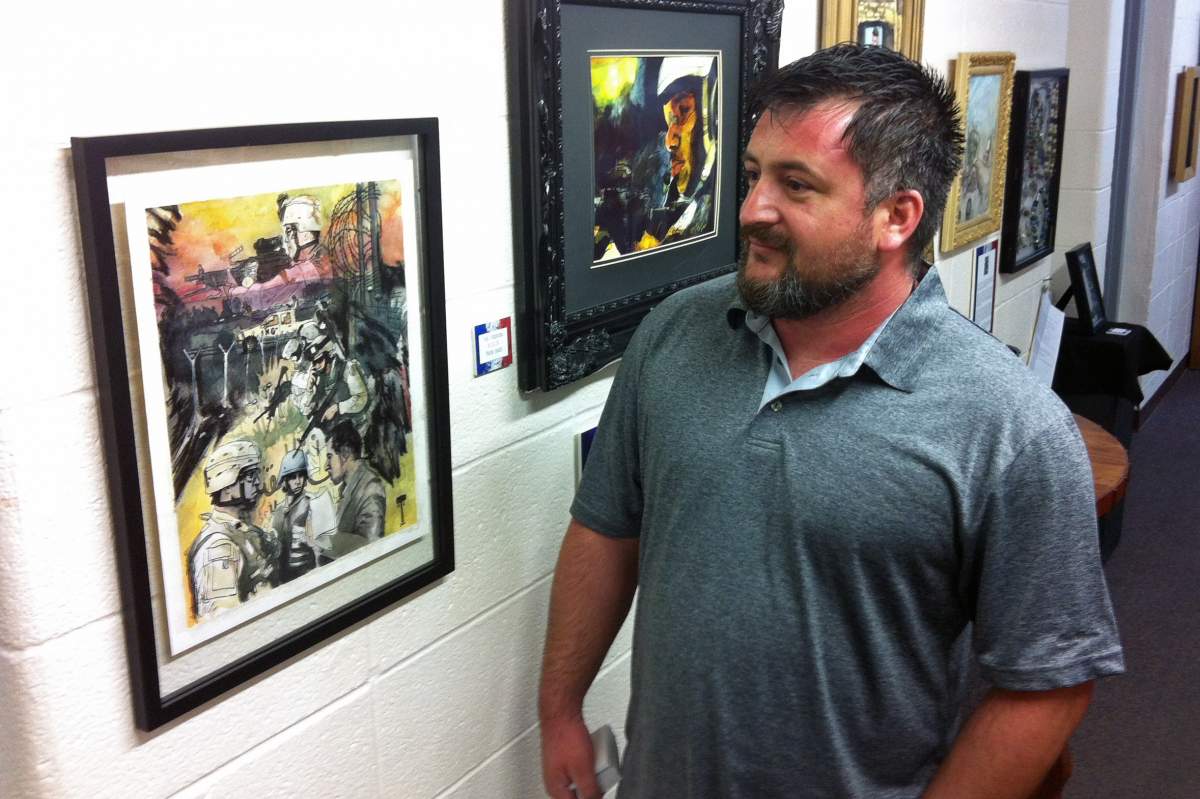 Artist Mark Smith starts with charcoal. That's the best way for him to get his emotions out on the canvas right away. With the image he calls Specialist Warner, he added detail with watercolor later.

To get in the right frame of mind for painting, he plays some music mostly stuff he was listening to during his time serving in the Army in Iraq back in 2004.

"I just blaze some music really loud. I blare it," he says. "When I was doing this, I was listening to As I Lay Dying. And I don't want words. I just want the feel of the music, you know."

Smith was a medic during his yearlong-tour in Iraq. When he came home to Indiana, he wanted to focus on his love of art.

"I was thinking about going into a graduate program in art therapy but I soon realized that I was kind of having problems myself, so I didn't think that at that I would have been a good candidate to be in the helping professions."

His experiences in war seeped into his everyday life in the form of bad dreams and recurring visions of treating wounded soldiers and civilians. Still today, not a day goes by that he doesn't think about that time nine years ago.

Painting is his way to cope with his PTSD.

"I can't tell you how difficult it is emotionally to draw someone's face and try to get it right going through it over and over again, and it's someone you cared about very much who was killed."

I was thinking about going into a graduate program in art therapy but I soon realized that I was kind of having problems myself, so I didn't think that at that I would have been a good candidate to be in the helping professions.

For his latest project, he reached out to his fellow soldiers and asked them to send him their pictures of their time in Iraq. He then painted those images.

Hanging on the wall at the Harrison Center For The Arts in Indianapolis are several works from that series in pen-and-ink, watercolor and gouache. He's exhibiting them as part of the War And Peace: Veterans' Art project.

The Specialist Warner painting depicts a soldier in profile aiming a rifle. The photo was taken when his unit wasÂ inÂ Tal Afar. "They took that photo of him... and then just like a few minutes later his truck was blown up," he remembers. "I evacuated him from the vehicle."

Specialist Warner lived through the attack, but then Smith lost touch with him after his tour ended. Thanks to this project, they reconnected after eight years.

Visitors will arrive at the War And Peace exhibit in about an hour. Smith is pricing his paintings with a museum curator as Scott Vanatter takes notes on a clipboard. Vanatter leans into Smith, gestures at one of the works and quietly says, "That one's sold."

VanatterÂ purchased the paintingÂ Specialist Warner, Colonel Carilla and Sergeant Scott for $45.00. What drew him to it?

"Memories. I'd rather not say," says Vanatter.

Out Of His Head

Despite his PTSD, there are some memories Smith wants to keep, like the connections he made with his fellow soldiers. Through his painting, he immortalizes his friends while working through his difficulties.

"I have the gift of being able to put out into the world what I feel inside through my images. If I couldn't do that, it would be horrible because it would really be locked in my head," he says.

When he first came home from the war, he said he wasn't a good candidate to be in the helping professions. Now, Mark Smith is a member of the VSA-Indiana staff, the state organization on arts and disability, where he teaches art to children with disabilities.

More: MarkÂ Smith is also the author of The Way of the Veteran.