Artist In The Making: Weaving In And Out Of Academia 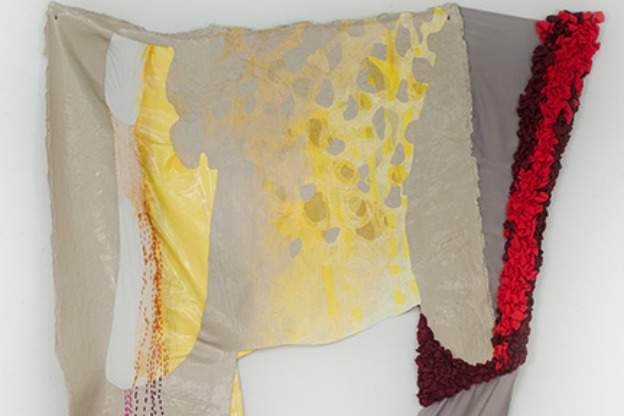 Artworks' Artist in the Making series continues with the first part of a conversation with Erin Castellan, an MFA Painting student at Indiana University's Hope School of Fine Arts. Erin's current artwork combines fabric, embroidery, and other traditional fiber techniques with painting and unusual material substances.

The multi-media work that Castellan will be showing in her thesis exhibition this spring integrates the multiple threads of her artistic life.

Raised in Morgantown, West Virginia, Castellan grew up drawing and painting, while following her mother a fiber artist on her rounds to neighbors' sheep farms. Encouraged by her father to channel her artistic inclinations in a career-oriented direction, Castellan considered a graphic design major in her first year at the Rhode Island School of Design. It didn't take long to realize that it wasn't a good fit.

Although she'd always considered her mother's field a hobby, Castellan gradually came to see how a textile design major could satisfy her aesthetic needs while at the same time providing  a livelihood.

After graduating in February 2003, Castellan set off on a cross-country jaunt to Seattle with several college friends. While toiling away in a motorized awning manufacturing facility, Castellan started a knitwear line, and continued painting albeit in a space that was more "artsy cubicle" than studio.

The rigors of life in Seattle and a longing to be closer to friends and family in the East precipitated a move to Philadelphia, where a couple of three-month internships led to a five-year stint at the Pennsylvania Academy of the Fine Arts, working at the museum information desk and in the art supply shop. Castellan found the academic milieu and facilities conducive to her studio practice; at the same time, her knitwear line was successful enough to afford her a decent studio among a collegial group of artists.

Return to a strictly academic status didn't occur until the fall of 2010, when Castellan entered the MFA program in Painting at IU.

"It's funny, when I finished up my undergrad, I remember driving towards Seattle and feeling so free and light, thinking 'I can do whatever I want, whenever I want!'. And I honestly had no desire to ever go back to school for my MFA. I just didn't see it in my future at all. And then, after seven and a half years of living paycheck to paycheck, in rundown apartments and just scrambling to make ends meet, I was so ready to go back to graduate school to have the freedom to learn and make art without the stresses."