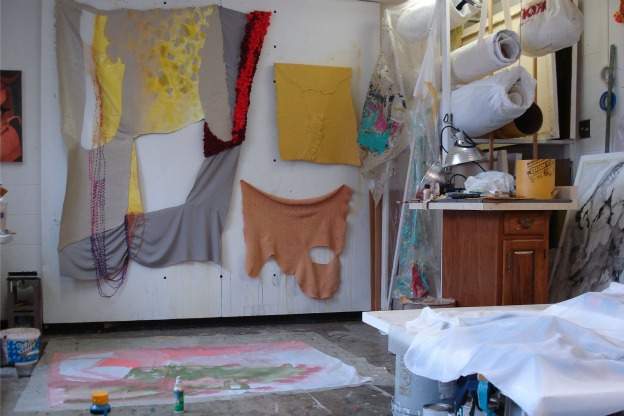 When we last visited Erin Castellan, a soon-to-graduate MFA Painting student at IU's Hope School of Fine Arts, she shared the story of her evolution from a childhood spent in the midst of Morgantown, West Virginia's spinning and weaving community-to the textile design program at the Rhode Island School of Design-to stints in Seattle and Philadelphia, making ends meet while painting, drawing, and starting a knitwear line.

When, after seven years in the so-called real world, Erin decided to return to the safe harbor of academia, her application portfolio was, predictably, eclectic. Using the monoprint technique, Castellan would paint on a Plexiglas plate, run it through the printing press to transfer the image onto paper, then embellish the print with hand-coloring and embroidery.

Not the average offerings of a prospective painting grad.

Painting With A Capital "P"

Still, Castellan was accepted into the MFA program, where she encountered a cohort that included some very committed painters. "I hadn't been aware of how passionate some people are about painting with a capital P until I came here," she recalls.

The culture of the program convinced Castellan to reconsider more traditional types of oil painting, on canvas and wood panel, while continuing with her miscellaneous method, which had suddenly become controversial.

"When I first came here," she explains, "whenever I incorporated embroidery into my painted works, there was always the question-â€˜well, why does it have to be thread, why can't it be paint?'"

Returning to an academic milieu implies a certain degree of consent to scrutiny and critical rigor from one's professors and peers. But was the process productive for her art-making? Her first semester in the program, Castellan concedes,

"I did second-guess myself. Should I be making oil paintings on canvas? It's hard, because as an artist you don't realize why you're making what you're making initially, you're just making. But slowly, by being in grad school and continuing to read and write about what you're trying to do, it helps solidify why."

During that first year, Erin was able to make the conscious decision to move beyond traditional painting toward alternatives she found more satisfying.

Two weeks and a half weeks before Castellan is to hang her thesis show, her studio is hung with wall-sized swaths of fabric that have been soaked in paint, adjoined to other pieces of cloth, collaged, painted, and embroidered upon, and draped from the wall. She works on several pieces simultaneously, pouring paint on muslin blanketing the floor before attending to some stitching on a hanging piece that's further along.

Castellan's practice of pouring paint might recall Jackson Pollock or Helen Frankenthaler-the latter seemingly also acknowledged in the amorphous color fields that have soaked through the fabric. The play between deep illusionistic space and the embroidered stitches and hard-edged painted marks on the surface rehearses Hans Hoffman's push-and-pull, and the accretion of materials taking the painting into the realm of sculpture hints at Rauschenberg.

But mid-century abstraction isn't a conscious source for Castellan. Nor are the feminist issues raised by her use of fabric and needlework, recalling traditional women's work. "It's come up a lot in critiques," she concedes, "but rather than making a feminist statement, I'm more interested in those techniques and processes in the way that they hint at human endeavor."

The emerging artist is looking beyond a twentieth-century Western frame of reference for inspirationthe contemporary Ghanaian artist El Anatsui, for example, who weaves massive tapestries from flattened bottle caps. "The way his pieces drape on the wall," she explains, "was something I thought about when I wanted to move away from traditional stretched canvas pieces and toward a sculptural three-dimensionality."

Erin Castellan showcases the works she's made over the course of her journey through IU's graduate painting program in her thesis exhibition at the Grunwald Gallery of Art, March 27th-April 7, 2012. The artist gives a gallery talk Friday, March 30 at noon, with an opening reception taking place that evening from 6-8 pm.