Artist In The Making: Joe Mace 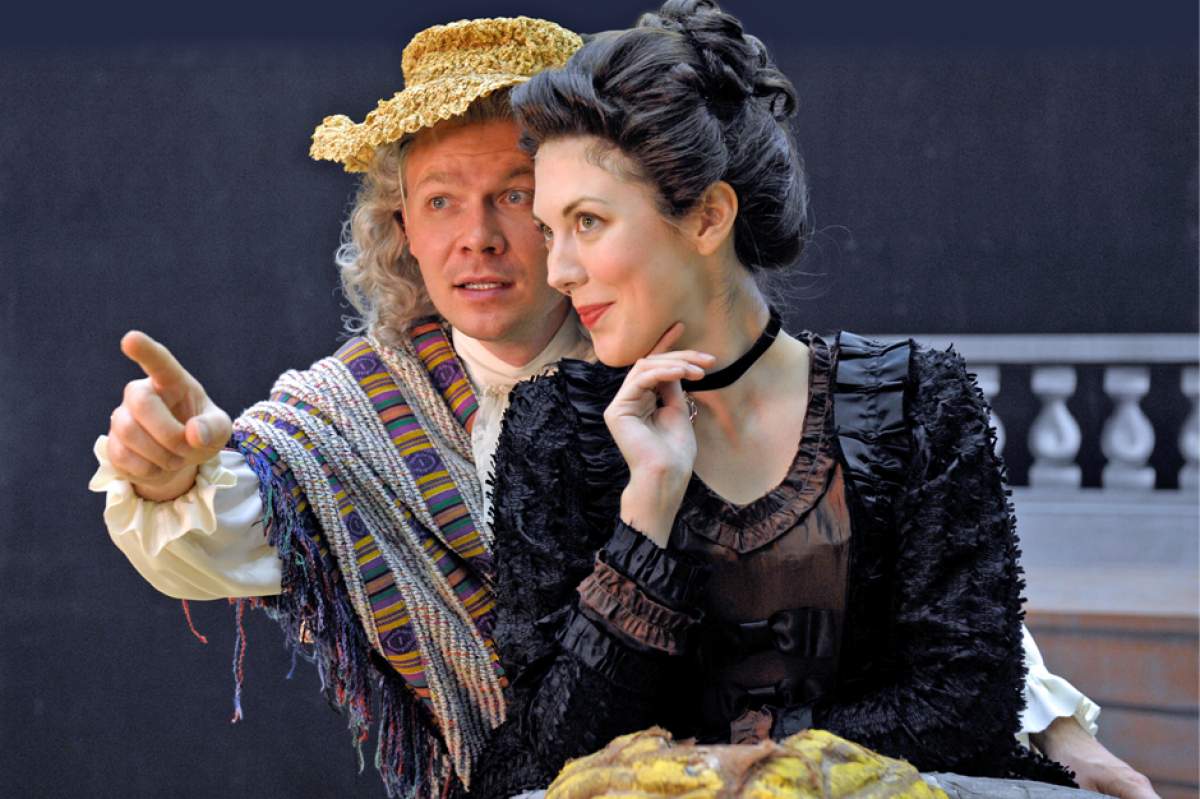 The latest installment of our Artist in the Making series profiles performer and teacher Joe Mace, who played four different characters in the recent IU Opera Theater production of Candide. In real life, he plays multiple roles as performer, classroom teacher, and voice coach.

This fall, Mace will complete his doctorate in voice at IU and move to New York City to pursue his dream of having a life that combines performing and teaching.

"My dream job is working eight shows a week at night in a great show on Broadway," he says. "And during the day, teaching. Lather, rinse, repeat."

â€˜Have You Thought about Singing?'

Joe was born 31 years ago to a musical family in Billings, Montana, in a house with two pianos and an organ. His mother played piano, his father sang, and the family, which included a sister who is now a clarinetist, would gather for music making.

He first performed on stage at age 8, when he starred in a local production of the musical Oliver! An opera singer neighbor who he had invited came to see him, and afterward she made an encouraging comment.

"You sing really well," Joe remembers her telling him. "Have you ever thought about singing?"

"She was first person who taught me you could pursue singing as something that was subject of study," he recalls. "That there was something more to singing than opening your mouth."

From the Mountains to the Bayou

As an undergraduate music student at Tulane University, Joe soaked up the musical cornucopia that was New Orleans.

"I entered into a culture that was completely foreign to the one where I grew up. I went from the mountains to the bayou . . . to extraordinary diversity."

Musically, he was exposed to Louisiana folk music and learned things about jazz he never knew before.

"It was just a marvelously eye-opening experience," he says. "I became a sponge. And when I realized how much there was in the world to explore that was different from what I knew, I began to explore it all."

A Digression from Music

In college, he briefly abandoned music as a career, studying international relations and political science, toward a dream of becoming a lawyer.

"I had this grand plan that I was going to speak French and be lawyer in France, eating cheese and drinking wine."

Then the dream came up against reality.

"I got into a class called Comparative Politics and for me, that's what hell is." He went on to complete his bachelors in music from Tulane, and a masters in voice from the San Francisco Conservatory of Music.

When Joe performed in the recent IU Opera Theater's production of CosÃ¬ fan tutte, he wrestled with the part of Don Alfonso. He so disliked the character-that of a cynical womanizer-that he couldn't get into his skin.

"I didn't want to play a caricature of something that I had created in my mind, and give a performance that was disingenuous, or dishonest. Or that was so overly acted that it bordered on being caricature or farcical."

He resolved the acting problem by finding truthful actions and motivations for the character, "so I was creating a character from an honest place, as opposed to making this big buffoon."

He felt more comfortable in the IU Opera production of Candide, feeling a kinship with one of the four characters he played, Voltaire.

"Because he thought so much," Joe says. "He was very analytical. He looked at a situation and tried to see the truth in it. I believe that's what I do."

But playing four parts, as well having to stay on stage in character for the entire evening, took their toll, and his performance began to suffer.

"I was working so hard to make it perfect. To make it be something special. That I had forgotten to be free. Which is silly, because I tell my students that all the time."

Candace Evans, who directed Candide, helped Joe to reduce the stress that came with the role.

"He is a man who takes the work very seriously," Evans says. "At one point I had to just say, â€˜Relax, and see what happens.'"

"I got so inside making sure everything was right," Joe says, "that I forgot my reason to be there. And once I remembered that, things did start to happen. I was able to communicate again. We can't communicate when we close ourselves in and get tight."

That's your intrepid reporter, bellowing a vowel sound while Joe plays the note on a piano in a private singing lesson. I've been taking lessons with Joe for about a year to improve my amateur singing. Today, he's using imagery to help me improve the way I create sounds in my body. He tells me to imagine a weight dropping down in my body when I reach for a high note.

"Remember that the higher the tone is going in pitch, the more firmly rooted it is in your body. Imagine a little tension right at the midpoint between your chest and belly button. Pull a weight down in your body as you sing."

I try it, and my tone is indeed better. But Joe observes me falling back into one of my bad habits: scrunching down while trying to reach a high note.

"I could see your posture, your chest muscles contracted toward your belly button." He mimics what I did, folding his torso in two and emitting an "Uhh!"

I try the note again, this time without scrunching, and receive his praise.

Later this year, Joe Mace will put his decades of training to the test when he moves to New York City and starts looking for work. If the move scares him, he doesn't show it.

"I found that taking risks is OK if your prepared for them. This is a risk that I'm prepared for. It's scary, but it will be OK."