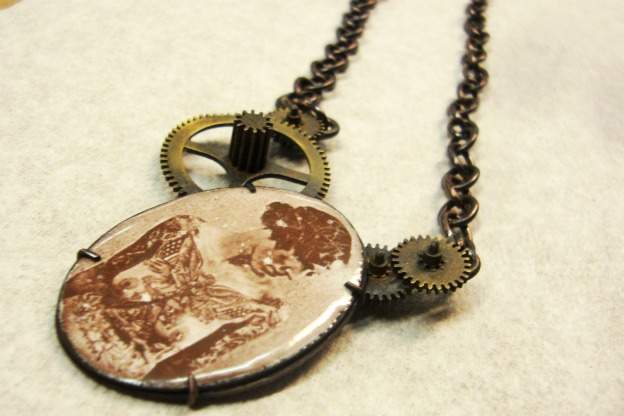 Artworks' Artist in the Making series launches with a conversation with Katie Hayden, a candidate for the Bachelor of Fine Arts degree in Metalsmithing and Jewelry Design within the Hope School of Fine Arts at Indiana University.

The series follows emerging artists in various fields-from the visual arts to music to creative writing-to chart their journey from student or apprentice to professional. The young artists profiled in Artist in the Making will revisit the program several times to weigh in on their progress and their visions for the future.

Katie Hayden grew up in Bloomington and graduated from Bloomington High School North. She started at Ivy Tech Community College before transferring to IU. Just having begun the BFA program in Metalsmithing and Jewelry Design during the Spring 2011 semester, at the time she spoke with WFIU in September 2011 Hayden still had three semesters left to go-even though, at the age of 24, she had already been in college for about four years.

"I went into college thinking I wanted to do art therapy in the Individualized Major Program," Hayden explained, "but then I started taking studio classes and realized that's where I wanted to be. Not writing papers about art, but making it."

Just to meet the prerequisites for applying to the BFA program, Hayden took two years of metalsmithing courses along with several semesters of Fundamental Studio, the nuts-and-bolts 2-D and 3-D art courses with a formidable reputation.

"They're the weed-out classes," Hayden joked. "They're extraordinarily time-intensive. To get an A, you have to spend at least twenty hours a week outside of class just to complete the work."

An additional consideration that presents an obstacle for some students wasn't an issue at all for Hayden. It was a cinch to get her parents' blessing to pursue a studio art major, she claimed. "My mother is a jeweler, so she was encouraging about it. Knowing that I'm following in her footsteps is really exciting for her to see."

Having been raised by a working artist, Hayden had a realistic notion of the artist's life before entering college. The BFA program has only served to reinforce the down-to-earth side of the profession, as she explained

The thing about metalsmithing is that it's a skilled tradesomething you would have had to apprentice in two hundred years ago, not go to school for. There are a thousand different techniques and it's incredibly detail-oriented. I made a chain once that took me weeks. Every night I would have to sit and file these jump rings over and over again. You almost have to be crazy to like doing that!

Recently, Hayden has been working on enameled pendants, onto which she transfers digital prints of vintage photographs of tattooed women that belong to the collection of the Kinsey Institute. Even with the microscopic focus it takes to create her pieces, Hayden keeps her eye on the horizon.

It's very heavy over our heads that there is going to be this real world in two years.Â Basically the program helps you become a practical artist. It's a lot of resume building, trying to get in as many shows as possible outside of school, trying to help you get your name out there. We get a lot of help from MFAs and our faculty members. They really do want to see us succeed.