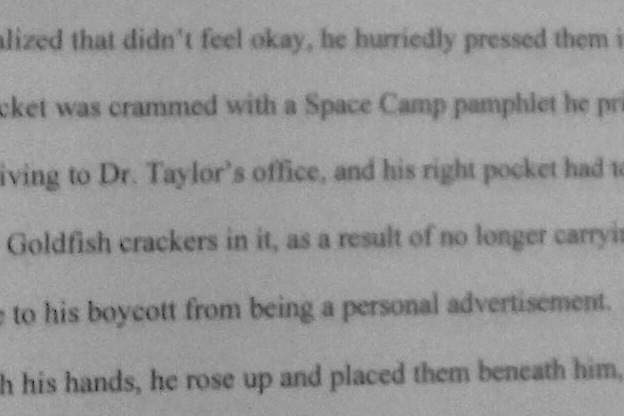 In many an introductory creative writing class, students are taught about Freytag's triangle. It's an analysis of dramatic structure conceptualized by the German playwright and novelist Gustav Freytag-but, truth be told, it's more a sort of mountain than a simple triangle.

According to Freytag, most dramatic narrative can be broken down into five parts: exposition, which is sort of the foothills leading up to the mountainside; the steep climb of the mountainside, which he calls rising action; the climax, or apex of the mountain; falling action, which as you can imagine is the other, steep side of the mountain; and denouement. Denoument comes from the French word denouer, literally â€˜to untie,' and it can beÂ thought of as the shallow hills at the end of your trek, where the last tangles of the story are finally undone.

RL: The way that I understand it is that the exposition exists in order for the reader to get a sense of everything they need to know about the character in order to fully comprehend the weight of what's going to happen. So I guess I was thinking about this first meeting with you as a kind of exposition: How this character, Bre, came to be in this place, IU, doing this thing.

BR: The story's really interesting. It started when I was in third grade. We did a lot of writing in third grade, we wrote a lot of stories. My third grade teacher told me that I should be a writer, and I don't know what she saw in third grade writing to say that, but it 's always stuck with me and it's always been in the back of my head. I've just kept doing it, and I love it.

RL: What were some of those first stories about?

BR: They're really weird. There's one about why a frog croaks, I don't know. And there's also one about a leprechaun. They're just really imaginative.

BR: Yeah, definitely. I wouldn't do it if I didn't have fun. Like, I try not to make it a chore. Like, I never feel, when I have a story due, it's homework. it's something that I want to do; it's just something that pushes me.

Bre is one person in a generation of people who entered college after the start of what's sometimes referred to as the Great Recession of the late-2000s'. With projected unemployment rates for Bre's graduation year, 2013, at between six and eight percent, some might say that choosing to major in creative writing might be shortsighted.

BR: People ask me what I'm majoring in, and I tell them creative writing, and they always ask, 'What are you going to do with that?'

BR: I'm gonna write. I don't know, I don't really think college should be about finding a job, especially if it's not something I want to do anyway.

RL: What is college be about, if it's not finding a job?

One of the most valuable skills one can learn by practicing creative writing is revision. After a writer completes a first draft, she brings it into her creative writing workshop, where her professor and her fellow students will discuss the piece's strengths and weaknesses. It's then up to the writer to go back and work on her story until it's as strong as it can be. As Bre puts it,

Sometimes it can be really hard to write something and to give it to a group of people that you don't really know, because regardless you're taking something from your head that is you, and you're making it somewhat tangible, you're putting it on paper and you're creating this world. People read that, and they know who you are. You definitely have to take down a wall, and just be vulnerable.

In that sense, the practice of creative writing-coming up with that initial idea; fleshing it out in your first draft; the sometimes nervewracking process of submitting a story to workshop; the hard work of revision; and the ultimate completion of the finished work-reflects the Freytag's triangle that is college itself: from the exposition, when students arrive at school with ideas of who they want to be that could have been formulated in third grade, to the denouement, when they leave school and move on as young adults in a larger world.

Read An Excerpt From Bre's Short Story, 'Space To Escape'

The bookshelf seemed to reach up to the ceiling, towering above Max's head, but not high enough to prevent him from being within eyeshot of what he desired to obtain. A book titled All About Satellites and Spaceships lay rested on the penultimate shelf. At eight, there were few things Max had the capacity to hunger for. Aside from his craving for dinosaur shaped chicken nuggets he sometimes had, which required him to incessantly ask his mom to pick them up from the grocery store until she finally remembered, this book was all he ached for. And he had asked his dad to get the book down for him several times, but he always bellowed out a chuckle and told Max something about how the book was from the 1950s and was a vintage piece of material which he wanted to keep in good condition.

Â Â Â Â Â Â "Maybe when you're older, big guy," he would say while planting his dry, heavy hands into the curly golden mane of Max's hair until it was disheveled.

Â Â Â Â Â Â Each time, Max would retreat, staring at the ground as he readjusted his hair.Â He didn't like to be touched. And he especially didn't like to be called two different things in one sentence. But he wouldn't say anything. Instead, he would just think to himself how he could go to class and tell his teacher, Mrs. Carr, that his dad used contradictions. Which is different from a contraction that smashes two words together.

Â Â Â Â Â Â Â Besides, the last time Max asked his dad for the book had to be at least three weeks ago, and according to the crayon lines on the frame of his door, he had grown at least one centimeter since then. He knew that he hadn't had a haircut in a couple of weeks and that could be the real reason for his growth spurt, but he disregarded that anyway. Today was the day he would learn about satellites and spaceships.

Â Â Â Â Â Â Â Max had a plan in line for how to get the book for several of days, but it required some research that he had to do without being suspicious. Which is why during dinner a few nights beforehand he asked his mom approximately how much one book weighs.

Â Â Â Â Â Â Â Taken aback by the question she looked at her husband who shrugged his shoulders, giving her permission to improvise an answer. "Well, I don't know Max. Books vary in their weight because there are so many different lengths and sizes. A paperback book with the same amount of pages as a hardback book would obviously weigh less. There's not a universal size and weight for books, so I can't really give you an answer besides that."

Â Â Â Â Â Â Â The word universal triggered Max's desire to have that book even more, and as he thought about holding it in his hands, a warm sensation converged in his pants and he felt his crotch area get heavy. Crossing his legs underneath the table, he asked as coolly as he could, "How about the books on the bookshelf? Like, how much do you think all those books weigh? Seventy pounds? One hundred pounds? Five hundred pounds?"

Â Â Â Â Â Â Â His father interjected, "Your mom and I got that bookshelf from IKEA when we first got married. While, it was one of the most expensive, it's still from IKEA, so I don't think it could hold five hundred pounds of books if it wanted to." Smirking, he then scooped a spoonful of butternut squash soup from his bowl and swallowed it before continuing. "But, let's just put it into perspective for you, Max. That bookshelf and those books weigh more than you. A lot more than you. What better way to understand something that you can't understand, than by putting it into a perspective especially for you?"

Â Â Â Â Â Â Â His dad was right. Which was why he was standing below the bookshelf, eyeing the exact location of the All About Satellites and Spaceships book that was positioned next to a book that said something about killing birds that mock. Once he had felt he had the exact location of the book calculated in his mind, he placed his red crew socks onto the bottom of the first shelf and began to climb his way up. All five shelves.