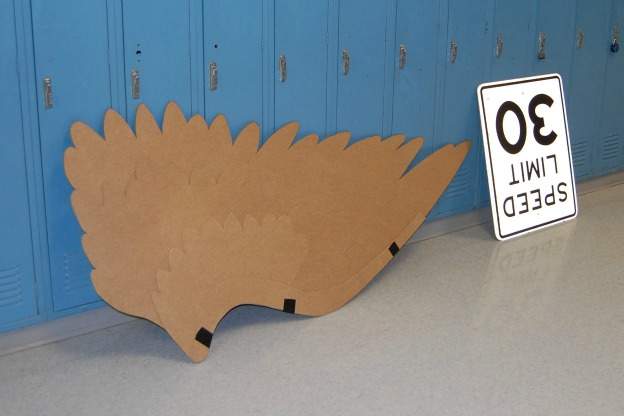 A haven for joggers, skaters, and cyclists in Bloomington will soon have its own guardian angel. The newest addition to the parade of artwork that lines the B-Line Trail is a ten-by-ten foot relief sculpture of an angel made from recycled metal.

Repurposed road signs, license plates, bicycle parts, and roller-skate wheels will combine with aluminum and galvanized steel in The Messenger, as the B-Line angel is being called. Â Â The halo, for instance, willÂ be a bicycle wheel, superimposed on a circular, reflective yellow sign.Â "So when you see the head," artist Joe LaMantia explains, "you're going to see this glow, like the aura angels have around them."

With its various references to recreational activity, The Messenger will be well placed along the city's multi-use trail.Â But there's a calm center in the midst of all that coming and going:Â the angel holds open a book, to reveal a redÂ heart.Â At night, a light sensor mounted behind the heart will cause it to glow.

Words of compassion suggested by community members and spelled out in scrambled license plate letters will surround the heart on the book's open pages. A self-described collaborative artistwhose most prominent recent project was creating the prototype for the 22 fiberglass brains decorated by area artists for Jill Bolte Taylor's Brain Extravaganza-LaMantia is emphatic about bringing the community into the art-making process.

After LaMantia has constructed the sculpture's armature using salvaged metal cut by students from the Hoosier Hills Career Center, volunteers can drop by public work sessionsÂ to rivet metal letters and "feathers" to the piece.

Chuck Forney, owner of the aptly named "Auto Heaven" has agreed to have the angel suspended from the side of his building overlooking the B-line trail at Allen Street. The Messenger will serve as a memorial to Jeannie Walters, a longtime realty business owner in Bloomington who passed away in 2011.

Monetary donations to complete the sculpture are being accepted through the Center for Sustainable Living. The public work sessions are slated to take place in late September on Fourth Street, between Walnut and College in downtown Bloomington.