The Art Of Perle Fine: What Becomes A Legend Most 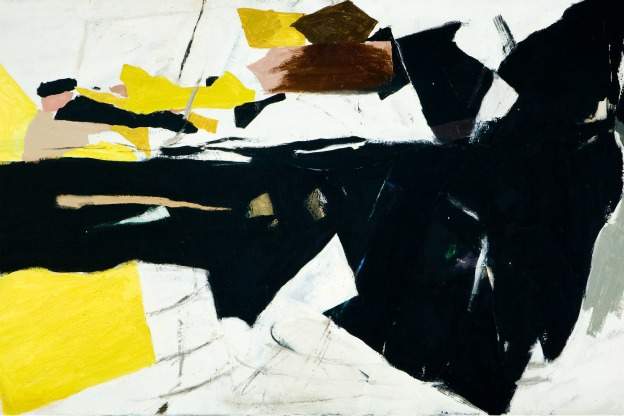 Jackson Pollock, Willem de Kooning, Mark Rothko-at mid-century, the American art scene didn't seem like it had room for anyone lacking a Y chromosome. "No matter how many it takes to tango," the painter Barnett Newman declared, "it takes only a real man to create a work of art."

Newman made that pronouncement, art historian Kathleen Housley notes, when his paintings were being shown at the Betty Parsons Gallery in New York in 1951.

That same year, however, Parsons presented a solo show by a far less macho art star.

"Perle Fine [was] a very quiet individual," explains Housley, author of Tranquil Power: The Art and Life of Perle Fine (Midmarch Arts Press, 2005). Unlike her notorious peers, "she is not out there throwing bar stools in the early 1950s."

Perle Fine [was] a very quiet individual," explains scholar Kathleen Housley. Unlike her notorious peers, "she is not out there throwing bar stools in the early 1950s.

Nonetheless, Perle Fine broke into the boys' club that was painting in the 1940s and 50s. Born in 1905 to Eastern European immigrants, Fine studied at the Art Students' League and the Hans Hofmann School in New York before going on to make art that would shape the direction of Abstract Expressionism.

"Beginning with her inclusion in Peggy Guggenheim's groundbreaking exhibitionSalon for Young Artistsat her avant-garde gallery, Art of this Century," Housley noted, between 1945 and 1953, Fine had six solo shows in New York's most elite galleries, including Willard, Nierendorf, and Parsons.

Additionally, Fine was one of the first women welcome in the art world's inner sanctum, a loose association of peers known as the Eighth Street Club. She was invited to join by Willem de Kooning, the long-lived, Dutch-born Abstract Expressionist perhaps best remembered for his savage paintings of Women. De Kooning and Fine shared a friendship, and philosophical affinity.

Their kinship is evident in a photo included in the first major Fine retrospectiveTranquil Power:Â The Art of Perle Finecurrently on view at IU Art Museum. One of a series of black-and-white portraits taken by Fine's husband, the artist Maurice Berezov, the photo also bespeaks the extent to which Perle was immersed in the social circle of the New York School.

In it, the dashing de Kooning is nestled between Fine and Ruth Kligman, artist and perennial muse, not to mention the sole survivor of the car crash that killed Jackson Pollock in 1956. "She had quite the reputation," jokes Housley.

Ruth Kligman had the reputation, and ended up getting played by Jennifer Connelly in the movie. Perle Fine wasn't in any movie.Â In her monograph, Housley describes how easily the glamour of these artists' lives could eclipse the substance of their work:

"The composer Morton Feldman who knew the Greenwich Village artists very welldrinking with them in the neighborhood bars and visiting with them in their studiostold art historian Dore Ashton that it was crucial for a painter to have charisma. Feldman arrived on the scene soon after Gorky's suicide and remembers that he heard nothing about Gorky's work, only about the man. He also heard anecdotes about Hofmann, de Kooning, or Pollock but seldom anything about their art. Bombast was also useful, because it was repeatable and made good press copy."

In the absence of flamboyant behavior, Perle Fine managed to garner plenty of press copy on the merit of her paintings alone.

"After visiting Fine's first exhibition," Housley writes, "Robert Coates, the art critic for The New Yorker felt compelled to write her a personal letter of congratulations: â€˜I must say the pictures looked, well, stunning. They were so strong, assured, and powerful.'"

After visiting Fine's first exhibition," Housley writes, "Robert Coates, the art critic for The New Yorker felt compelled to write her a personal letter of congratulations: â€˜I must say the pictures looked, well, stunning.Â They were so strong, assured, and powerful.'

"'These are gentle paintings of near unspeakable beauty',"Housley quotes. "With wavering bands of close- valued mauve, pink and ochre, that suffuse the canvases in what [the critic] described as â€˜an elusive, ethereal light', he compared the series to â€˜Monet's water lilies somehow boxed up and gone structural'."

Critical acclaim never flagged over the course of Fine's twenty-five solo shows and 125 group shows-at such venerable institutions as the Metropolitan Museum of Art, the Modern, the Guggenheim, and the Whitney. Not to mention, during her lifetime, Fine's work was permanently added to those collections.

So it seems curious that when Housley, the preeminent Fine scholar, enters the retrospective at the IU Art Museum, she admits that it's the first time she's seen over three-quarters of the work in person.

From The Vault To The Wall

"While Fine's work is in well-known collections," explains Susan Knowles, an independent curator based in Nashville, Tennessee who was contacted by the artistic executor of Fine's estate to organize the show, "it's been many years since they've been shown." The last time the works were gathered up and put on view was toward the end of Fine's life, for a show at Guild Hall in East Hampton in 1978.

Getting paintings out of storage and into a major traveling exhibition requires vision, and funds.

"When you ask to borrow a work from a museum, often times it means that a conservator will spend some time with it," explains Knowles. "And then you as the organizer are asked to bear some of the costs. It does cost more than you would think to just take a picture and hang it."

Approaching foundations and other granting agencies, Knowles discovered that it was the right moment to make a pitch for Perle Fine.

"Here we had a perfect example of a first-generation Abstract Expressionist who had all the credentials;" Knowles explains, "and the work shows it. Things take time to come to the fore, and now we're at a point when people are really looking at this period." And possibly, hoping to provide a correction to the way the story of twentieth-century art got told.

"One of the big criticisms in the 1950s was that codification was happening way too fast," Housley points out. "Before work was really having a chance to be vetted carefully and thoughtfully, museums were buying it and basically giving their imprimatur to certain artists who possibly shouldn't have had it yet. But then, it becomes self-perpetuating."

The support obtained for this exhibition from the National Endowment for the Arts, the New York State Council on the Arts and the Judith Rothschild Foundation, among others, manages to bestow a sort of belated imprimatur on Perle Fine.

Benjamin Genocchio, "A Portrait of the Artist, Her Work Revived," NY Times, April 24, 2009. A review of Tranquil Power:Â The Art of Perle Fine at the Hofstra University Museum, Hempstead, New York, where the exhibition originated.