Art, Interrupted: A Flawed Ambassador For The American Dream 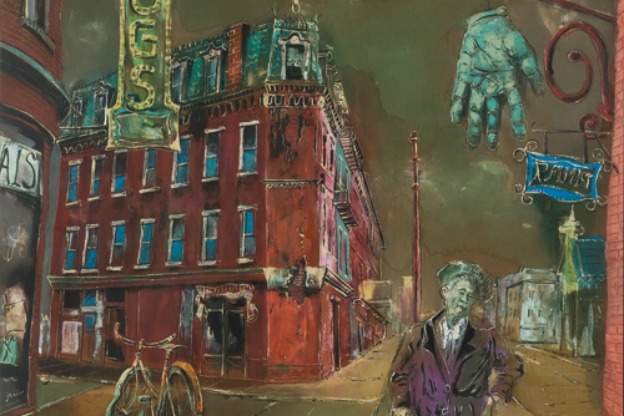 In 1946, a show of American paintings was organized by the U.S. Department of State with the intention of promoting American ideals. Advancing American Art included paintings by the politically progressive realist Ben Shahn, who once claimed, in a Smithsonian interview, to "paint the indomitable spirit of a man to rise from the incredibly impossible situation or morass he's in," cites art historian Phoebe Wolfskill. "To keep going."

'If you contemplate adding to the suicide rate,' penned one reviewer, 'we recommend this picture for your guest room.'

The Picture of Democracy

Although Shahn's pictures evince a considerably more tempered optimism,Â this wholesome, can-do spirit was perceived as the perfect antidote to post-war malaise and the insidious rise of communism abroad. The exhibition was an opportunity to showcase the broad range of contemporary American art as the sign of a healthy democracy, "to show audiences in Europe and Latin America," curator Jenny McComas explains, "that American artists enjoyed freedom of expression, which was very much not the case in the Soviet Union."

The paintings in the 1946 show were selected by J. Leroy Davidson, of the Walker Art Center in Minneapolis, who "selected artists whose work represented the best in contemporary American art," according to McComas.

The star-studded cast of Advancing American Art speaks to Davidson's role as a taste-maker. The show, which has been almost completely reassembled and is currently on view at the IU Art Museum, included canvases by Edward Hopper, Georgia O'Keefe, Arthur Dove, Jacob Lawrence, and Adolph Gottlieb, along with many whose names are more obscure now. At Davidson's recommendation, the State Department purchased the paintings and packaged 49 of them to travel through Eastern Europe, sending 30 others to Latin America.

"It opened in Prague, before traveling to Bratislava and Brno," reports McComas, the museum's Class of 1949 Curator of the Art of the Western World after 1800. The other set of paintings was shown in three venues in Cuba and Haiti.

Not quite a world tour.Â Why would a juggernaut of such communist-withering ambition have such limited exposure?

After its first few openings, the tour was recalled.

"It's clear why the State Department would have found a number of these images troubling," states Wolfskill, visiting assistant professor of art history at IU. There are so many paintings in this gallery [that express] alienation, troubling human conditions, difference and division rather than unity, after the war."

Artists from the immigrant and African-American communities shared their particularly jaundiced views of American life. In German expatriate Karl Zerbe's Boston street scene, for example, the most prominent businesses in operation are a drugstore and a fortune teller'sadvertised by the prominent palm in the upper right foreground.Â The only commerce that thrives in this bleak urban landscape deals in the palliative and the occult, Wolfskill notes. The sky is an ominous, "apocalyptic" greenish grey. "There is a sense of emptiness," Wolfskill adds.Â "This was once a thriving community, neglected now."

Our history has assumed that Abstract Expressionism is our big marker of innovative art;Â when, really, at any given time there are so many types of art going on.

Jacob Lawrence's painting of a rickety tenement in Harlem is an indictment of the substandard living conditions most African-Americans endured.Â Lawrence contrasts the unstable fire-escape-riddled structure with a solid, balanced building clearly designated for white residents, to lambast restrictive covenants that segregrated the population.

Unfair housing practices and medical care, institutionalized racism, abandoned communitiesthe bleak content of the canvases in the traveling shows was often conveyed in a pictorial language particularly suited to the theme of alienation. The brushwork of Italian-born painter Louis Guglielmi, for example, is "so precise, so clean, it's almost as if it's machine made," Wolfskill observes, "as if there's no human touch here."

The effect of Guglielmi's painting Tenements was so chilling, in fact, that it prompted one reviewer to write, "If you contemplate adding to the suicide rate, we recommend this picture for your guest room," according to Wolfskill.

After the show was cancelled, the paintings were sold by the War Assets Administration. Many were acquired by university collections, including Auburn and the Universities of Oklahoma and Georgia, the organizers of this reprise. With only ten of the original 79 paintings missing, Art, Interrupted illuminates a moment, like a time capsule. The show is striking in its inconsistencyiconic canvases are interspersed with more banal pictures; nascent abstraction mingles with heavy-handed social realism-but that's its special gift. Although the original tour was a diplomatic debacle, its reconstruction provides a valuable view of the directions in art at mid-century, before being tidied up by the master-narrative of art history.

"Our history has assumed that Abstract Expressionism is our big marker of innovative art," remarks Wolfskill;Â "when really at any given time there are so many types of art going on. I think that's what this show represents really well."

This British made-for-television film explores why the CIA covertly promoted the work of American Abstract Expressionist artists during the 1950s. Co-sponsored by The Ryder Film Series.