Art for One Hour 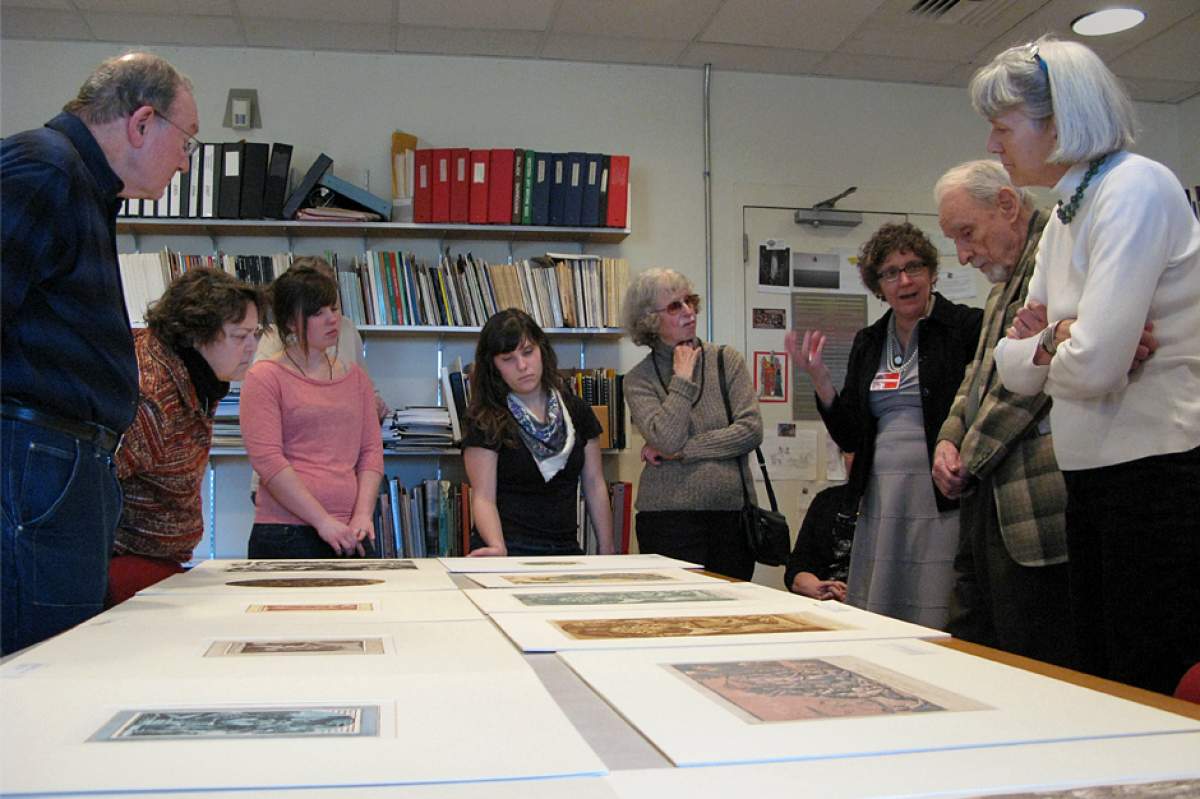 On a Friday afternoon a little before three o'clock, fifteen people wait outside the offices of the IU Art Museum, eagerly waiting for the One-Hour Exhibition to start.

"That was terrific," he says. "It's great to be able to see prints that are not on exhibit normally."

The museum's works on paper department presents the monthly One-Hour Exhibitions by drawing upon its collection of five thousand prints, drawings, and photographs.

The exhibits give patrons a chance to view rarely-seen objects and to pose questions about them to a curator. The showings are limited to fifteen participants who sign up on a first-come, first-served basis.

Muriel Kdan and Carol Arnold of Bloomington have been to several One-Hour Exhibitions, which Kdan calls a "peek preview."

"There are things that are not brought out to the museum."

Arnold agrees. "You can see works on paper that aren't typically exhibited in the museum. So it's really a wonderful opportunity to see things that you couldn't see otherwise."

The one-hour time span of the exhibitions is well-suited to showing works on paper, as the gravest danger to such works is prolonged exposure to light. But a one-hour exposure presents no problem.

The theme of today's exhibit is chiaroscuro woodcuts, which is good news for IU professor of printmaking Valgerdur Hauksdottir.

"It relates directly to what we're doing in my class," Hauksdottir says. "So, it's excellent to have the opportunity to see some of [IU's] fabulous collection."

One of Hauksdottir's students has shown up for the one-hour exhibition: MFA printmaking student Kristy Hughes. Experienced in linocuts and collagraphs, Hughes has recently started creating woodcuts. Today, she'll study the prints by the old masters to learn techniques she can use in her own work.

"A lot of woodcuts, or a lot of printmaking, is sometimes harder to find in museums," Hughes says.

"And IU has such an amazing collection of original prints. So it's just an awesome opportunity to see the real thing right before you-not even on a wall, but inches in front of your face-which is really exciting. Especially woodcuts, because you don't see a lot of those in museums."

Today's exhibition is being led by Nan Brewer, the museum's curator of works on paper. With all fifteen participants signed in, she unlocks the door that leads to storerooms which are usually off-limits to the public. She escorts us down a hallway and pauses outside the viewing room to give us a little introduction.

"Today we're doing chiaroscuro woodcuts, which were really the first color woodcut process in the Western world," she begins. "Last month we did the Japanese color woodcuts, so I thought that this would be a nice continuation of some of those things."

A few minutes before, we had been given a handout apprising us of the viewing room's rules that have been set up to preserve the centuries-old prints:

Leave backpacks, large sketchbooks, or food outside the room. Don't touch the prints or point at them with a pen or pencil; don't even cough near them. Be careful with tabletop-length clothing which can drag across the surface of a print.

Inside the Viewing Room

Brewer reminds us to tuck in our scarves as she leads us into the climate-controlled viewing room. On three walls stand bookshelves packed with thousands of art books. Filling the center of the room are two long white tables on which lay twenty prints by such masters as Ugo da Carpi, Antonio Zanetti, and Nicolas Le Sueur.

"I wanted to start over here before we actually get to the woodcuts," Brewer tells us, "because I think it's important to have a sense of why this new technique developed.

"Here we have a printed book page with movable type. We had printed text with inserted woodcut images. And we're talking black and white woodcuts. No color to them. But often these images would be hand-colored."

The participants quickly become absorbed in examining the prints, some leaning over carefully to get a closer look, some using one of the page magnifiers provided by the museum to inspect detail.

The small group size allows for easy back and forth conversation between Brewer and the participants, and she pauses for a teaching moment.

"This one is believed to possibly be a proof. Why would we think it might be a proof? Anything, anybody sees in this piece that might suggest that?"

After a puzzled silence, Jerry Chertkoff offers a guess.

"It almost looks like the coloration is outside her head," he ventures. "It's like in the funnies, where they got it wrong."

"That's it," says Brewer. "It's off register. This should be here."

Learning from the Masters

After Brewer's talk, the participants move around the tables as they chat among themselves about the prints. Kristy Hughes quietly takes photos of the prints with her iPhone. Later, she'll refer to the photos as she makes her next woodcut.

"It's going to be a multiple block, and I was interested in the tonal qualities that these specific woodcuts produce. And also the use of color and the highlights were really interesting. So I'll look at these while I do my sketches or while I print. So [they're] references for future work."

Nan Brewer wants the one-hour exhibitions to give people the kind of experience that Alfred Mansfield Brooks-the first IU fine arts professor-wanted his students to have: a sense of awe and inspiration when in the presence of original artwork.

"And we want that same kind of feeling of something special. A different type of viewing experience in the print room."

The one-hour exhibitions are easy on the museum's budget: Mounting them takes a fraction of the time and effort that goes into preparing a full-scale exhibition. They also help spread the word that people can arrange their own private exhibitions.

"I started doing the One-Hour Exhibitions," Brewer says, "because we have all these treasures that people don't get to see and I really wanted to get the word out that people can make these appointments on their own. We encourage people to come individually or as groups. So I just really wanted to make that known."

Since Brewer began the series in 2010, other curators at IU have mounted their own One-Hour Exhibitions, including one on ancient coins. She expects museum curators in cities such as Milwaukee and Portland to follow suit.

If the trend continues, more art lovers will get more chances to view rarely-displayed treasures-if only for an hour.

The next One-Hour Exhibition at the IU Art Museum will be of abstract expressionist prints and drawings. For future announcements on the exhibitions, visit the museum's Web site.