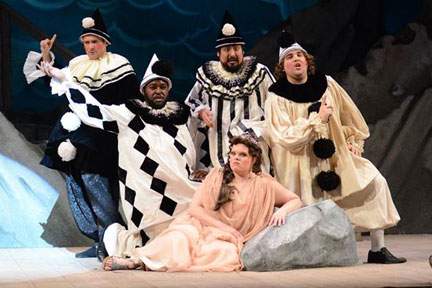 Ariadne auf Naxos at the IU Musical Arts Center is a wonderful mixture of sometimes moving high drama and very funny low comedy. Two companies have been hired to entertain the cultured guests of a wealthy patron between an evening dinner and a show of fireworks. There's the composed opera of the lamenting Ariadne, Jenny Schuler abandoned by Theseus and only saved from death by the arrival of Bacchus, Jeffrey Springer. And there's the improvised commedia del arte tale of Zerbinetta, Jenny Moser and her four suitors.

The opera begins with a lovely overture and an extended view of the occasionally fitful, sleeping Ariadne and then it's into the Prologue proper of back stage chaos. The two companies are preparing for the evening. Benjamin Bird as the dancing master is rehearsing. Wig maker Rodney Long is working on a piece. A march of servants proceeds in and out in comic fashion. At first the tension is the over the evening's order. Will the slapstick follow the cigars and brandy or the high drama? Amidst all this, the major domo, Christoph Irmscher announces that the dinner is running late, the fireworks will start as scheduled and that the patron wants both plays to be presented at the same time.

The composer, Elizaveta Agladze is distraught; it's only with the counsel of the teacher, Milan Babic the lure of the fee and the charm of Zerbinetta that she agrees. The Ariadne and the Bacchus are convinced when each is told that it's the other who'll have lines cut. Zerbinetta, always the professional counsels her quartet that they'll just try to cheer things up and so the curtain descends. As this prologue ends there, was a curtain call and well deserved applause for teacher, conflicted composer, wig maker, dancing master, lackey and marching staff.

In act two the deserted Ariadne is fitfully sleeping on a rock in Naxos outside her cave. A trio of gossamer clad ladies, two nymphs and an echo describe her pains and circle around her. They were lovely though I wished for a bit more separation between the nymphs and their echo. Strauss has written some of his finest dramatic music for Ariadne and guest Jenny Schuler drew applause for her dramatic presence and singing. Zerbinetta, the athletic Jenny Moser made the effort to rouse Ariadne to the topic of love and womanhood in the pyrotechnics of her "high and mighty princess" to more applause. Although the commedia del arte troupe proved unsuccessful in their efforts to rouse Ariadne, they were quite the hit with the audience. It's great to hear a Musical Arts Center crowd laugh out loud.

In the extended finale of Ariadne auf Naxos, resolute tenor Jeffrey Spring appears as Bacchus. At first Ariadne believes that he's the god of death that she's been eagerly awaiting. It takes a Wagner tinged while for Bacchus who still a bit under the spell of Circe's potion and for Ariadne who's quite wedded to her anticipation of death to get things straightened out, but they do. Ariadne is with Bacchus. Zerbinetta has settled on Harlequin from her suitors, and the probably still grieving composer is at least well paid for his efforts.

Saturday night's Ariadne and Zerbinetta were richly applauded at the curtain. NiZel Austin, Patrick Conklin, Jeremy Gussin and Vincent Festa were enthusiastically greeted for their comic and vocal efforts. Maya Vansuch and Gabrela Fagen as the nymphs with Savanna Webber as their echo were applauded as well.

Arthur Fagen conducts Ariadne auf Naxos with loving attention to the detail of the orchestration and to both the serious and the richly comic aspect. James Marvel is the inventive stage director.

You can find this review and an interview with Zerbinetta on our web site at WFIU.ORG/ARTs