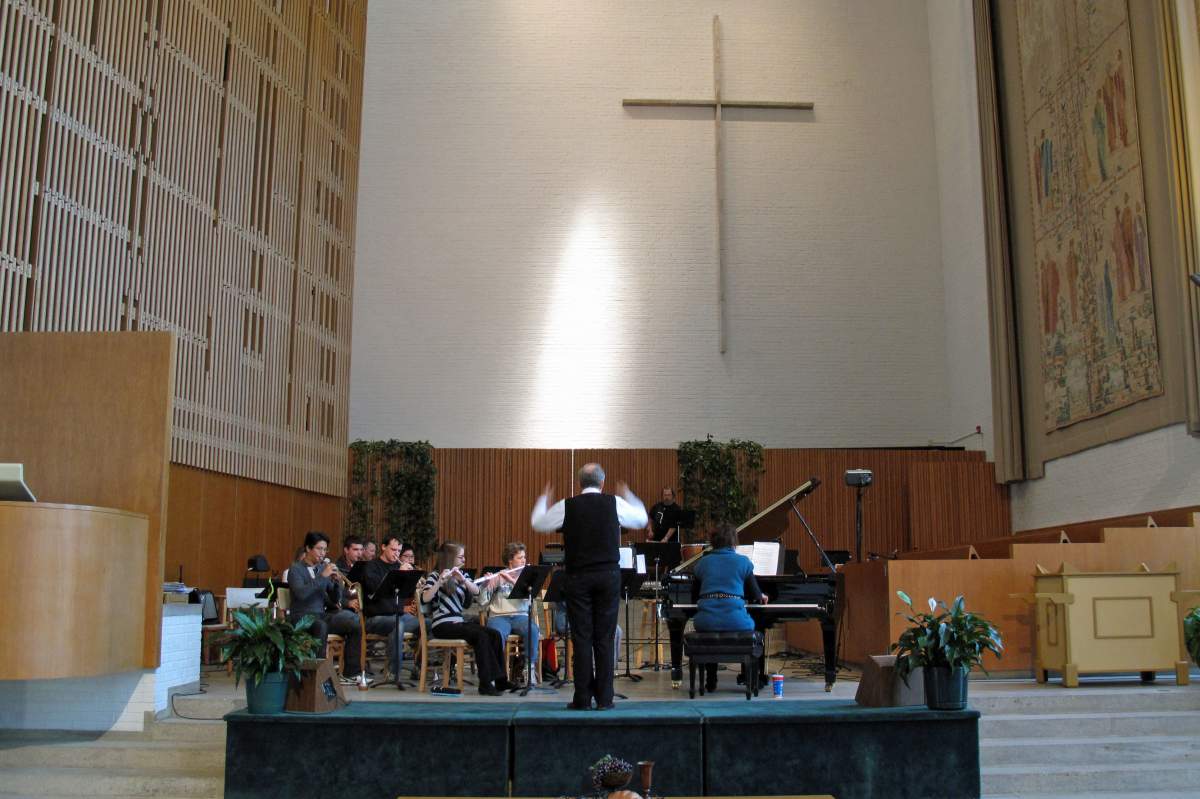 Dan Wallace has served as Worship Minister at the First Christian Church in Columbus, Indiana for fourteen years. That's fourteen Decembers filled with the tried-and-true Christmas carols, like "Joy to the World."

But with a 15-person orchestra made up of volunteer musicians his disposal, he says he has no problem reinventing the traditional tunes to keep them fresh. This year, for instance, he's excited to program a big band arrangement of "It Came Upon A Midnight Clear" featuring an alto saxophone player in the orchestra. "He will rock on it. It'll just wail," Wallace says.

From Pros To Amateurs

The skill level of the musicians ranges from semi-professionals to folks who have only recently picked up their instruments again after a long hiatus. The group only rehearses twice a week in preparation for that Sunday's performances, and then it's on to a new set of music for the next week.

Wallace takes this into account when selecting music, not just for the group, but "for me as well, because I enjoy playing but I know I'll be directing and playing, so I have to fit music for myself, too, to be honest."

Wallace's duties include playing the organ, directing the choir and orchestra and planning the music for the weekly services. What most people don't see is all the work he puts into organizing volunteer players. When planning rehearsals for the Christmas services, he has had to take into account the local band schedules, community activities and events taking place at the church.

Recruiting musicians to play in the orchestra is also a challenge, but Wallace has had help with that from saxophonist Ryan Mann.

When Mann joined the orchestra four years ago, he took it upon himself to fill out the orchestra. "Dan always put some sort of orchestra together, but it was never anything fancy or really anything large," Mann says. So during his last couple years of high school, he invited fifteen of his friends to play in the orchestra. "Ever since, we've had this large orchestra."

Mann displays a special kind of commitment to the orchestra: He makes a two-hour drive home to Columbus from Purdue, where he's a nursing student. This time of year, he makes the trip basically every weekend.

In spite of all the time and effort Wallace puts into rehearsing with the orchestra, he says his job as Worship Minister is really about reminding the congregation why they're celebrating Christmas in the first place:

The most crucial thing I deal with is what people are going to take home, besides the wonderful music and the excellence of the players: the text. When you leave here, what do you remember, and how does it make your life better?