Antigone, A Play For Our Time 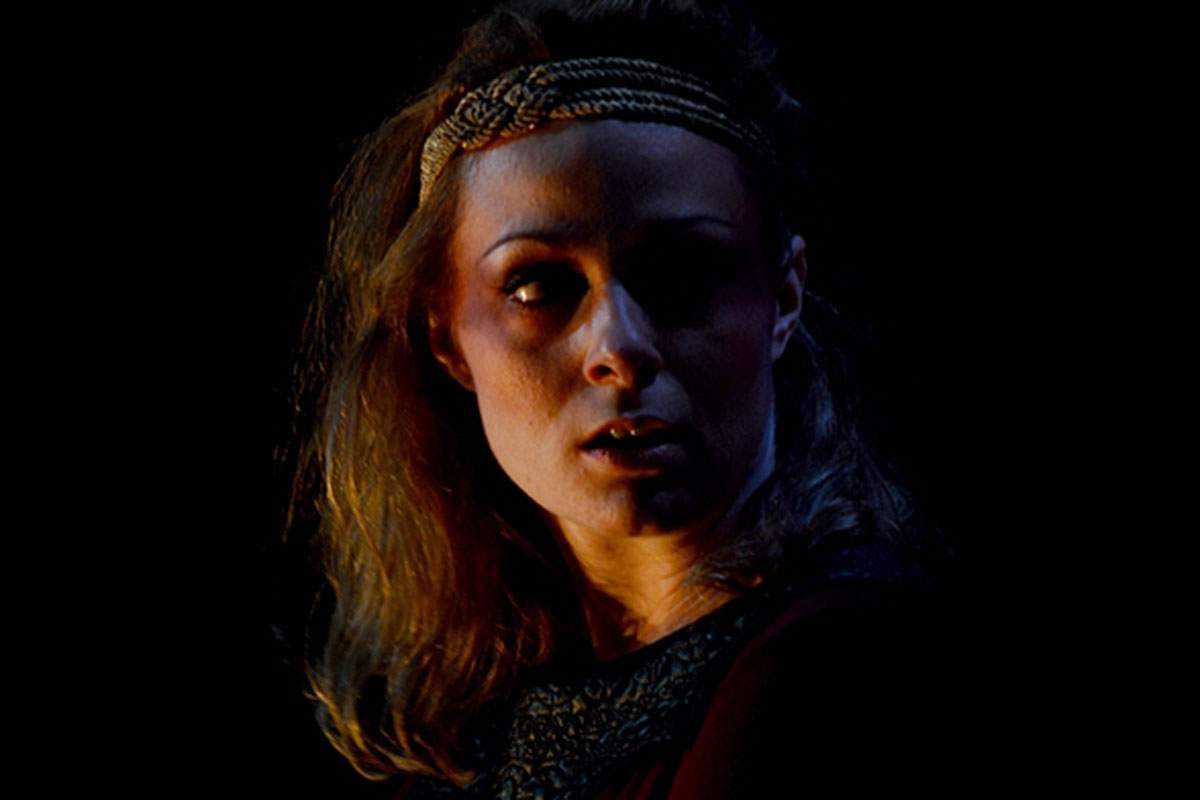 The IU Theatre is doing a terrific production of Jean Anouihl's Antigone. It's colurful, creative and involving.  Antigone pits the individual conscience of the maid Antigone against the social responsibility of King Creon. It's based on the Greek tragedy of Sophocles, and informed by the situation in German controlled France during World War II.

The play opens with a view of Kevin Nelson's scenic design. It's an austere but rich towering assembly of rough stone and stained wood with plenty of open space and a contrasting balcony throne room.

Emily Sullivan, Caroline Huerta and Kaleigh Howland are the chorus of fates. They're sometimes sympathetic, always involved and occasionally threatening. When they told the audience to turn off cell phones, there was no hesitation.

In the drama, Oedipus's sons, the brothers Polynices and Eteocles have battled over the rule of Thebes and killed each other. King Creon in a political move has ruled that Eteocles was the defending hero to be buried with pomp and Polynices was the rebel and will be left unburied. Antigone, their grieving  sister, gives up the prospect of a comfortable life and a loving marriage to bury Polynices.

Ashley Dillard plays Antigone as smart, caring, committed and headstrong young woman. She's very much a teen ager is her search for absolutes in a world that is far from it. Justino Brokaw plays Creon as a sympathetic figure, an old politician with plenty of reasons for seeking compromise positions.

Adding comic humanity to the grim drama were Antigone's nurse and the guard who captures Antigone as she buries Polynices.  Anna Guse has a quite funny scene early on as Antigone's long suffering nurse. Nicholas Jenkins was perfect in his mastery of minutiae as the guard.

Director Katie Horwitz has emphasized the collaborative nature of this Antigone. While she is the overall director, Elizabeth Shea from the Contemporary Dance Program is responsible for movement design. The theatre's professor of movement and stage combat has staged the dramatic complex battle scene. Courtney Foxworthy's costume from the slinky costumes of the fates to the broad epaulets of the King were attractive additions to the story.

Jean Anouihl's Antigone seem especially pertinent in an era that sees extreme positions on many sides. During her long arguments with the King, Antigone is willing, even eager to die for her beliefs. The King is willing to live with his. I kept thinking of the rash of shootings, of suicide bombings and of the political primary debates that we've been seeing with their own mixes of absolute and temperate positions.