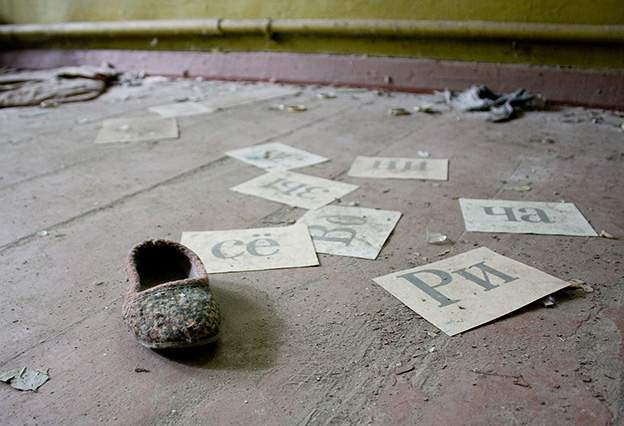 "â€¦ there the nightingale

The epigraph of the episode comes from The Waste Land by T.S. Eliot. The nightingale song you'll hear was recorded in Chernobyl Town for the non-profit sonic journalism project Sounds from Dangerous Places. Â The thrush nightingale (Luscinia luscinia) is one of the species that have adapted and repopulated the Chernobyl Exclusion Zone in the absence of human habitation.

This week's episode features the short story "The Zero Meter Diving Team" by Jim Shepard, about sclerotic bureaucracy, nepotism, and "positive spin" contributing to the causes of the Chernobyl disaster and worsening its effects. The story appears in Shepard's short-story collection Like You'd Understand, Anyway (Alfred A. Knopf, 2007-read it online at BOMB Magazine). Each of the eleven first-person stories in the collection required Shepard to inhabit someone else's world from the inside out: the cosmonaut who was the first woman in space; a Roman military scribe posted at Hadrian's Wall; a Nazi in search of the Abominable Snowman in the Himalayas â€¦ . But "The Zero Meter Diving Team" is also a story of masculine relationships within a family, the competitive bonding and dependence among three brothers who lost their mother at an early age and vie for their father's esteem. (See the New York Times review of Like You'd Understand, Anywayand an interview with Shepard at Fiction Writers Review.) Tony Brewer reads.

The story is framed by two poems, read by Joan Hawkins and Frank Buczolich, that offer oblique perspectives on our promethean ambitions. Language itself becomes a kind of quantum physics-or alchemy-in "Towards the Primeval Lightning Field" by Will Alexander, the title poem of his 1998 collection from O Books. "The Eternal Rebel" by the early 20th-century Irish poet, suffragist and peace activist Eva Gore-Booth was written at the outbreak of World War One, as warfare entered into a new technological era. In mythology, the figure of Prometheus sparked the technological revolution by introducing fire to humanity -and was condemned to suffer eternal torment.

The Crickets Bone Caravan concludes its summer series for WFIU next time with the second part of "Nuclear Nightingales," which features readings from Voices from Chernobyl, the oral history by 2015 Nobel laureate Svetlana Alexievich.

Our theme music is "Kong" by Cyro Baptista, from his album Bluefly (Tzadik, 2016). Music for "Nuclear Nightingales, Part One" comes from The Natural Order (Northern Spy Records, 2014) by Fred Frith and John Butcher; Shostakovich's Jazz Suite No. 1, in a live performance on toy instruments by Robert De Nittis and the Tools Toy Gang ; and Songs of the Mouse People, III "Every Disturbance Is An Opportunity" and IV "A Thousand Shoulders Tremble (Under a Burden Actually Meant for One)," from the album Martin Bresnick: My Twentieth Century (New World Records, 2005). Bresnick's composition Songs of the Mouse People, commissioned and performed by cellist Maya Beiser and percussionist Steven Schick, was inspired by Kafka's last short story, "Josephine the Singer, or the Mouse People." Thrush nightingales from Chernobyl Town were recorded by Peter Cusack for the Sounds from Dangerous Places project. Additional sound effects from the Chernobyl area by FÃ©lix Blume, with other sounds from Freesound.org. Cricket ambience for this week's "cricket quote" recorded by Eircom at a public bath in Moscow.