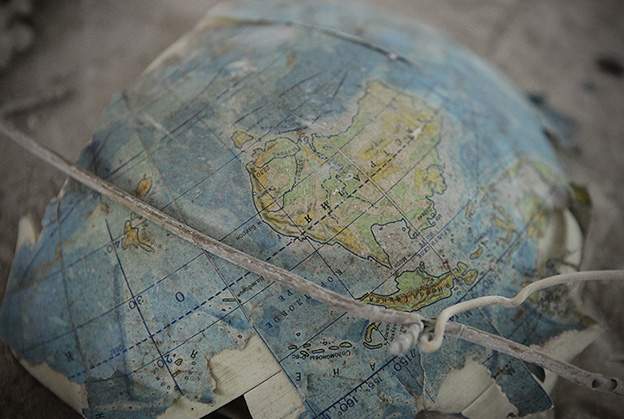 This year marks the 30th anniversary of the Chernobyl disaster, the worst accident ever to occur at a nuclear power plant. In the second part of the Anthology summer series finale "Nuclear Nightingales," the Crickets Bone Caravan audio troupe presents readings from Voices from Chernobyl, the oral history by Svetlana Alexievich, one of five monumental works of non-fiction for which she was awarded the 2015 Nobel Prize in Literature. Alexievich writes against "intentional forgetting" and the memory hole of positive spin.

This two-part anthology has paired two literary responses to Chernobyl: Alexievich's oral history, compiled with a consummate verbal artistry to rival a poet's; and "The Zero Meter Diving Team" by Jim Shepard, a meticulously researched work of historical fiction. The pairing is meant to unsettle notions of "unvarnished truth," and how narrative shapes perceptions of realities. The viability of nuclear power as an energy source is not the focus; rather, the program explores personal and institutional accountability and responses to systemic failures-on which silence should not be an option.

but those tombs over Chernobyl make visible your name

The epigraph for the episode comes from "Elegy on the Migrating Nightingales Massacred by Nuclear Physics at Chernobyl" by Philip Lamantia, in his Collected Poems (University of California Press, 2013). The text is based on an excerpt from Voices from Chernobyl published by Paris Review in 2004, including the background statements at the beginning read by Sarah Torbeck and Doug Storm. All the stories were "excavated" by Alexievich from extensive interviews conducted with each individual over a period of months or years. The first segment features intertwining voices (Renee Reed, Mary Pat Lynch, Patsy Rahn) representing "the returned," those who were forced to evacuate but defiantly went back to their homes despite the contamination, and then a chorus of soldiers (Jack Hanek, Michael Perry, Doug Storm) who were called into service to control the disaster and suffered the effects of radiation.

The centerpiece of the program is the tragic love story of young newlyweds: the husband, a fireman, was among the first responders. The wife's heartrending monologue is performed by Berklea Going.

In the third segment, the voice cast represents individuals from various perspectives:

The nightingale song incorporated into the soundscape and transitions was recorded in Chernobyl Town by Peter Cusak for the non-profit sonic journalism project Sounds from Dangerous Places. Â The thrush nightingale (Luscinia luscinia) is one of the species that have adapted and repopulated the Chernobyl Exclusion Zone in the absence of human habitation. Additional sound effects from the Chernobyl area by FÃ©lix Blume: the sound of wind whipping through plastic in front of the fourth reactor at the plant; empty nuclear power plant with ongoing construction work; and electrical hum near the Chernobyl plant with birds in the background. Other sounds from Freesound.org include a Ukrainian forest in May with birds singing and dogs barking; Russian shortwave transmissions; children playing on a Russian street; and crickets at a Moscow bath.

â€¢ "Chernobyl Heroes" from the album Music from the Inner Journey by Terrence Cashion (self-released, 2011);

â€¢ "Less" and "Szeki" by the composer and violist Lev Zhurbin, a Moscow emigrÃ©, from the album Mnemosyne (Kapustnik Records, 2008) by his ensemble Ljova and the Kontraband;

Theme music is "Kong" by Cyro Baptista, from his album Bluefly (Tzadik, 2016).