Anthology: Do You Have Your Bathroom ID? 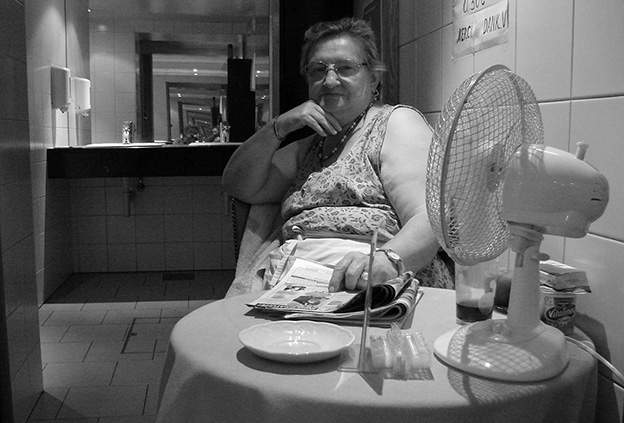 "Do You Have Your Bathroom ID?" is an anthology of poetry, short fiction and other writing on bathing customs, the bathroom as a site for contesting identities, and the toilet/toilette of gender.

Muslim and Midwestern etiquette for public restrooms collide in "My Grandmother Washes Her Feet in the Sink of the Bathroom at Sears" by Mohja Kahf, read by Berklea Going. Kahf is the author ofÂ the novel The Girl in the Tangerine Scarf, set in Indiana, where she lived for a few years as a child. The New York Times profiled Kahf in 2007 ("She Carries Weapons; They Are Called Words"); Nerve has a 2004 interview with Kahf about her sex column for the now-inaccessible progressive Muslim online magazine Muslim Wakeup! Her poem here is set to a marimba arrangement of Debussy, Arabesque No. 1, performed by Naoko Takada.

"Bed-Wetting," read by Michael Perry, turns out to be a satire on the contemporary workplace, which trains independent, competent employees to become infantilized and passive. The story by Zhang Jishu, translated by Julie Chiu, comes from Loud Sparrows: Contemporary Chinese Short-Shorts (Columbia University Press, 2006). The music is "La Cinquantaine" from the album Silhouettes in Jazz (Everest, 1959) by the Michael Coldin Septet, improbably featuring harp and harpsichord. Silhouettes in Jazz lends its musical vibe from the turn of the decade, '50s to '60s, throughout the episode.

"Adolescence II," from The Yellow House on the Corner (Carnegie Mellon University Press, 1989), is one of three "Adolescence" poems by Rita Dove. Berklea Going reads.Â Of this poem, Stephen Burt wonders "What is the young Dove â€¦ awaiting? Maturity? The end of childhood? Heterosexual desire? Evidence that she belongs in this world rather than in the consolingly imagined space of fairy tales and talking animals? Or evidence that she does not?"-in The Forms of Youth: Twentieth-Century Poetry and Adolescence (Columbia University Press,Â 2007). The music comes from "Sweet Chinoiserie" from The Art of the Tony Piano (Decca, 1997) by Margaret Leng Tan, which pops up elsewhere in the program.

"Gas Station Restroom" by Alan R. Shapiro, read by Tony Brewer, was published in the September 2008 issue of Poetry magazine. David Caplan writes deeply about the poet in "Ethical Suffering: On the Work of Alan Shapiro" at VQR. The harp music is "Stella by Starlight" from Silhouettes in Jazz.

"A Faun's Afternoon," by Taiwanese writer Ta-Wei Chi, translated by Dave Haysom, appeared in the 2015 Queer issue of Words Without Borders. Jack Hanek reads.Â Ta-Wei Chi teaches queer theory and disability studies at National Chengchi University, Taipei. He disturbingly fuses myth and the psychological horror genre in a story that begins with men-only bathing at a hot-spring spa. The first part of the story recalls several Western classical myths, particularly as represented in Ovid's Metamorphoses, where a naturally occurring bathing pool is a site of traumatic self-revelation (Narcissus, Hermaphroditus, Actaeon). After the protagonist violently rejects his identity, the story also resonates with Edgar Allan Poe's classic "The Tell-Tale Heart."

Although the narrative calls for the character K ("yes, I'm into Kafka") to play Debussy's Prelude to the Afternoon of a Faun on harmonica, we've substituted his solo flute composition Syrinx in a transcription for harmonica performed by Wai Hang-hay. Additional music comes from "Where the Cities Gleam in Darkness" by Fred Frith and Barry Guy, from Backscatter Bright Blue (Intakt Records, 2015), and "I've Got You Under My Skin" from Silhouettes in Jazz.

Frank Buczolich reads "The Lady's Dressing Room" by Jonathan Swift. This verse satire is sometimes read as a misogynistic rant, but isn't Strephon, so clueless of the realities of women's bodies, the real object of attack? So argues Don Herzog in Household Politics: Conflict in Early Modern England (Yale University Press, 2013), but Louise Barnett takes the opposite view in Jonathan Swift in the Company of Women (Oxford University Press, 2007). Perspectives on Swift also from Elizabeth R. Napier, Falling Into Matter: Problems of Embodiment in English Fiction from Defoe to Shelley (University of Toronto Press, 2012). The harpsichord music, performed by Marcela Fagerlande (via YouTube), is the Sonata in D Major by the 18th-century Portuguese-Brazilian composer Francisco Xavier Bachixa.

Alok Vaid-Menon is a transgender writer, performance artist and community organizer whose writings can be explored at ReturnTheGayze. Renee Reed reads "Lying," a short essay excerpt, and the poem "Transmisogyny," which was published in the first issue of Vetch: A Magazine of Trans Poetry and Poetics in the fall of 2015. The music that begins "Lying" is "A Foggy Day" from Silhouettes in Jazz. "Transmisogyny" is set over John Tavener's "Lament for Phaedra," performed by the cellist Maya Beiser, from her album World to Come (KOCH International Classics, 2003).

Series theme music is "Kong" by Cyro Baptista, from his album Bluefly (Tzadik, 2016). Additional music from "Milarepa, Pt. 1" and "Meditation for a New Year" by the Anat Fort Trio and Gianliugi Trovesi, from Birdwatching (ECM, 2016); and "Chitarra Ocarinistica Bad Reise" by Fred Frith, from Angelica 92 (CaiCai, 2013). Sound effects from Freesound.org.