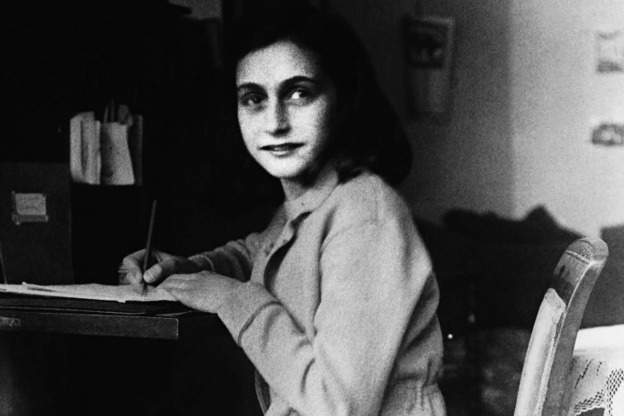 The Diary of Anne Frank is one of the most cherished documents in literary history.  The young girl's account of her years of hiding in an Amsterdam attic before meeting her end in a concentration camp has been translated into myriad languages, and adapted for stage and screen, orchestra and chorus.  Under the direction of Catherine Rademacher, the drama department at Bloomington High School South is mounting a production of the play based on the diary. But the students' preparation has gone far beyond the line-memorizing and set-painting many might remember from high school theatre.

The student actors are eager to share the lengths they went to in order to create an atmosphere of realism. One actor, playing a Nazi, spoke about learning phrases in German. His favorite is "There is nowhere else to hide." He stumbles while saying it, and a fellow cast member gently corrects him.

Another actor, playing one of the eight people in hiding, Mr. Van Daan, talks about what it's like for him to hear German language in the play: "I think the fact that our Nazis are speaking actual German – and I honestly can't understand what they're saying – when they're screaming in your face, it's extremely intimidating."

For these actors, though, learning German, Dutch, and Yiddish phrases was just a part of an in-depth process of preparation for this production. Nathaniel Kohlmeir, who plays Otto Frank (Anne's father), explains, "We also took a field trip to the CANDLES Holocaust Museum, to really experience what it was like, [to get a] first-hand account from a Holocaust survivor, Eva Kor." While she was in the concentration camp, Kor and her twin sister were subjected to Dr. Mengele's infamous experimentation.

In 1984, Kor founded the organization CANDLES, an acronym for Children of Auschwitz Nazi Deadly Lab Experiments Survivors, and in 1995, founded a museum in Terre Haute dedicated to telling the survivors' stories. The actors went to Kor's museum and saw her speak there, and their visit had a massive impact on their approach to the play.

It can be really easy to generalize and just look at statistics and numbers, but after seeing Eva Kor, it's easier to see our characters as real people, in all of their vices and virtues.

Noah Sandweiss, playing Mr. Alfred Dussel, talks about the impact seeing Eva Kor speak had on his perception of the characters in The Diary of Anne Frank: "It can be really easy to generalize and just look at statistics and numbers, but after seeing Eva Kor, it's easier to see our characters as real people, in all of their vices and virtues."

Lucia Davila, who plays Edith Frank (Anne's mother), says that seeing Eva brought the play to life for her: "I've read about the Holocaust, and I've heard, but meeting a person who truly was there, and hearing their words – not what I've read, but what she remembers – it brought it to a whole new level; it really made it real to me."

Kohlmeir says that for him, seeing Eva Kor translated into really feeling the way that the historical people must have felt

When we were talking with Eva Kor and she was explaining what actually happened in Auschwitz, the important thing to remember is, these eight people who are surviving in this annex, they think they're safe. But there's always this feeling of foreboding, like we could go there. And we were sort of coming up in our minds with what this place was like, where we could eventually go. But hearing Eva describe what actually happened there, now we can really put it in our minds – 'okay, this is what would happen if we were sent there.' It gives a whole new threatening feeling to everything you're doing.

Bringing reality to the stage is a primary concern in this production. As Maria Lysandrou, who's playing Anne Frank, notes, "What I think the difference is between this and regular musical theatre is that this is real life, this is what happened, this is history - and it's really hard to portray that."

Besides learning German, Dutch, and Yiddish phrases and visiting the CANDLES Holocaust Museum, the cast gathered for a traditional Hanukah dinner, read the original diary and the book Witness  a collection of first-hand accounts from people who lived in Nazi-controlled Europe and  watched and discussed films related to the Holocaust.  The students also attended a local production of The Whipping Man, a play about a Jewish Confederate officer who returns home wounded after the war to find his family missing and only two former slaves remaining, who then have to take care of him. The students spoke with the actors playing in this Cardinal Stage production about how they prepared for their roles.

And the efforts to evoke reality did not stop with the actors' preparation.  As director Rademacher explains, the set design literally places the audience in the hidden attic. She says, "The whole point of the way we have the set is that I want the audience to feel like they're in the attic as well. People have to come in – you can't just walk up the stairs, and take a seat. Everyone's going to have to have to come in through the bookcase, through the annex, and be right here."

On top of all these external preparations, cast members have also done intensive internal preparations for the performance. They are acutely aware of the power of this play to inject vivid emotion into what might seem like dead history. The actors speak about the play as though it is real - and it's clear that, to them, it is. An actor playing one of the soldiers said that "It's always a bit heartbreaking, whenever we have to come through that door and take them out, and hurt them."

You read about it in history class, and you learn about how many people have gone through this horrible, horrible thing, just tons and tons of people. But you don't personalize the people. So, I think this play, with the eight characters alone, you realize that each character has specific personalities, and they're not all perfect, and they have different quirks, and things like that. These people were real. I think it's kind of heart-wrenching, going through the whole play, from the beginning to the end …You make a connection with each individual character, and you watch this horrible thing happen to them.

We can't know everything that happened in the Secret Annex, everything that all of those in hiding went through. We only know what Anne tells us in her diary. But one thing remains certain, something that will never lose its potency – the emotion of the situation.