As American As Pie (From A Muslim-Owned Pizzeria) 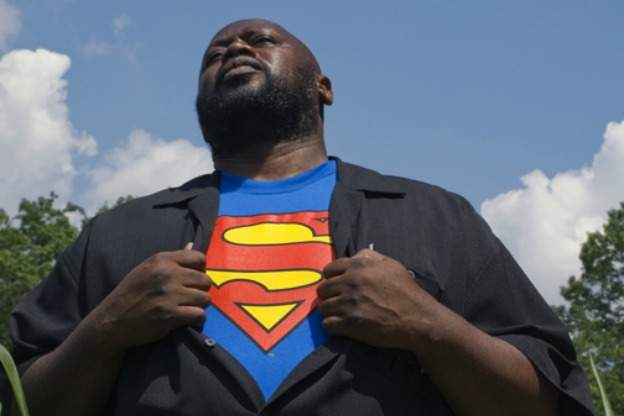 When the State Department sent artist Todd Drake to Bahrain just after the Arab Spring, he met a man who wanted to tell him about Islam.

"He pulled out his cell phone," Drake explains, "and showed me this saying he kept there: â€˜If you don't find God in the next person you meet, it is a waste of time looking for Him.'"

The adage glows from the screen of the phone being held by the man Todd met and photographed as part of his current project, Esse Quam Videri, currently on view at the Mathers Museum of World Cultures at Indiana University.

The exhibition showcases the results of the collaboration Drake forged with Muslims in North Carolina and beyond. Its title drawn from the state's Latin motto, meaning "to be, rather than to seem," Esse Quam Videri features 19 photographs, collaged images, and self-drawn portraits-along with short essays providing context for the pictures.

The cell phone aphorism served as a springboard for Drake's project: "How do we find that of God in those around us," the artist wondered, "and push against some of the misconceptions that get spread about one another?"

Having long served as a calling card among many subcultures in his native North Carolina, Drake's desire to "push against" stereotypes predates his current project.

As a Rockefeller Fellow at UNC Chapel Hill's Center for Global Initiatives in 2004-2005, Drake collaborated with "truck drivers, immigrants working up in Cherokee, NC in the service industry, Alzheimer's patients, and exotic nightclub employees" as part of a project called The Transnationalization of the American South.

In addition to creating paintings in tandem with the some of these less visible members of North Carolina's heterogeneous population, Drake also had a hand in producing two books charting the undocumented immigrant experience in North Carolina.

By 2007, Drake's work had led him to a different population

"I couldn't at the time think of a more marginalized community in the country than the Muslim communityrecognizing that September 11 set us on a course that resulted in their feeling not entirely welcomed in the country, and remembering how we treated Japanese-Americans during World War Two. If you spoke to most Muslims they would probably share the fact that this is one of the worst times to be a Muslim-American. I have had people tell me that point-blank."

So Drake gave presentations at mosques, schools and colleges to propose his idea

"I tried to let them know that â€˜this is your opportunity to speak.' That I was going to try to multiply whatever they wanted to share and put it out there take it to schools, put it in exhibitions, put it on the Internet, eventually make a book out of it. That took a little bit of convincing at first. They thought I was some sort of researcher. But I'm not a scientist trying to do a query and then take that information back to the laboratory. I was trying to empower this community to use the visual language of portraiture, which doesn't have a long tradition in Islam. I had a lot of people tell me they wouldn't be interested; but instead, they jumped on it!"

The results of Drake's partnership with Muslims in North Carolina, Bahrain, and beyond have been exhibited at 20 universities, at schools and in churches. Although in most cases Todd composed and shot the photographs in the show, provided art direction, and times, digitally manipulated the pictures, he calls the pictures "Muslim self-portraits", and defines his own role as one of an editor.

"They're in control of the content," Drake asserts. "That makes it in my mind a self-portrait."

The collaborative story-telling process is not without its bumps. Drake was leery when Tamiran African-American man he metsaid he wanted to pose in a Superman shirt.

But Tamir explained to the artist that Islam had helped him shed the hatred that he grew up with as a black man in the American South. "So today, I serve all people and I love all people'," Tamir told Drake. "I feel like Superman." Drake took it upon himself to purchase the Superman shirt Tamir posed in. "I was bought in at that point," Drake avers.

Tamir's is not the only self-portrait with an element of the unexpected. A group portrait of five smiling women in head scarves, fooling around with a basketball, challenges deep-set assumptions about gender and religion. "We've got this 9-11 perspective on Islam," Drake concedes, "that everything is all about jihad and shariah law, and here these women are out, having a blast with a basketball."

From basketball to Superman, these Muslim subjects have chosen iconic fixtures of American life as attributes for their portrait. A third photograph homes in on that theme further still. This unprepossessing still-life of the average American lunch functions as the portrait of a Muslim restaurant owner, who has been feeding ten to fifteen homeless people in his Greensboro establishment for the last twenty years.

"When I opened this pizzeria," the restaurateur told Drake, "the homeless would go to the dumpster and pull out crusts and eat them. I saw them and said, that's no way to be human. Come inside and sit down."

Within moments of hearing the story, Drake recalls, "in walks a homeless gentleman and sits down at a booth. The owner looks at the gentleman, looks at his staff and nods his head. And that's the meal they prepared for him. It happened right in front of me, and I photographed it."

The humble slice of pie and flimsy plastic cup pose for their mug-shot while the restaurateur himself avoids the camera. We can just make out his rear-facing figure in the dimly lit background. Although the artist respected the proprietor's wish to remain anonymous, the artist's goal is to bring more of these everyday, and sometimes exceptional Muslim stories into the light.

"You know, his story is important too. It's not as sexy as the bad stuff and so it doesn't get spread as far and wide. We've had some home-grown terrorists come out of North Carolina. The media is doing a great job of telling their story. It's that lack of balance that I'm trying to address."

At the core of this collection of Muslim self-portraits is an American ideal.

"One way I describe myself is as a radical equalist," Drake explains. "I think all people are created equal. I bought that. And that comes from our government, our founding fathers. So let's go forward and do that."