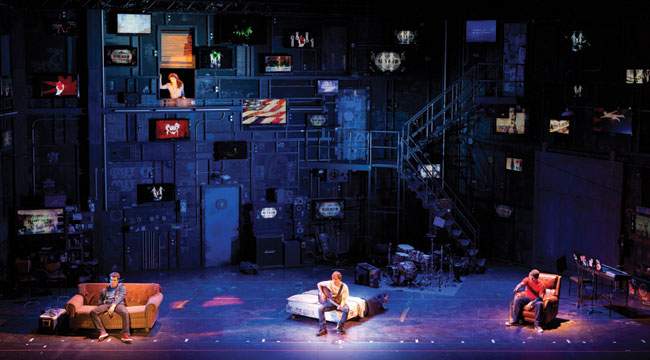 The alt rock band Green Day's Grammy Award winning CD American Idiot is about three boyhood friends searching for meaning in the post 9-11 world. Its songs along with some from their later Grammy winner, 21st Century Breakdown form the core of the musical American Idiot opening the season at the IU Auditorium.

Green Day's American Idiot is a real rock musical. It's on the model of The Who's Tommy and Jesus Christ Superstar. Hard, loud, pulsating sounds like the title song alternate with quieter ballads like "Boulevard of Broken Dreams." Music director and keyboard player Evan Jay Newman leads a two guitar, bass, and drum outfit. A unique element is a prominently featured cello. Dialog is sparse and there's just enough to key the flow of the lyrics. Sound amplification is excellent and most lyrics come through cleanly.

Johnny, Alex Nee along with his friends Will, Casey O'Farrell, and Tunny, Thomas Hettrink set out to leave home for the excitement of the big city. It's an adventure that's mostly misadventure. Johnny finds love with Whatsername, Alyssa DiPalma, but a decidedly unpleasant side of himself in St. Jimmy, Trent Saunders. Will, finds that his girl friend Heather, Kennedy Caughell, is pregnant and reluctantly stays home. Tunny, aimless in the city gets sucked into too much TV, joins the army and is wounded in fighting.

It's an accomplished and confidant cast that all sing and act with variety and authority.

American Idiot is staged in a big open three story warehouse with the wall dotted with television screens. Sometimes they have messages, sometimes multiple images from the show, sometimes the whole wall is a screen for projections. It's quite effective and impressive.

Most of the dancing in American Idiot has a very simple elementary school playground feel to it with plenty of climbing and jumping on that big set.  The exception is an incredibly beautiful aerial ballet of the hallucinating Will with The Extraordinary Girl, Jenna Rubaii.

Emotions and feelings in American Idiot are at about the junior high level. This is rock and roll folks.  But the consequences…unwanted pregnancy for Will and Heather, serious drug abuse for Jimmy and Whatshername, and a permanent war wound for Tunny…are very much adult.

The show concludes with the bitter sweet "…Coming Home Again," but it seems a bit tenuous and the rave-up  finale as the entire cast strums "Time of Your Life" has a gritty questioning quality.