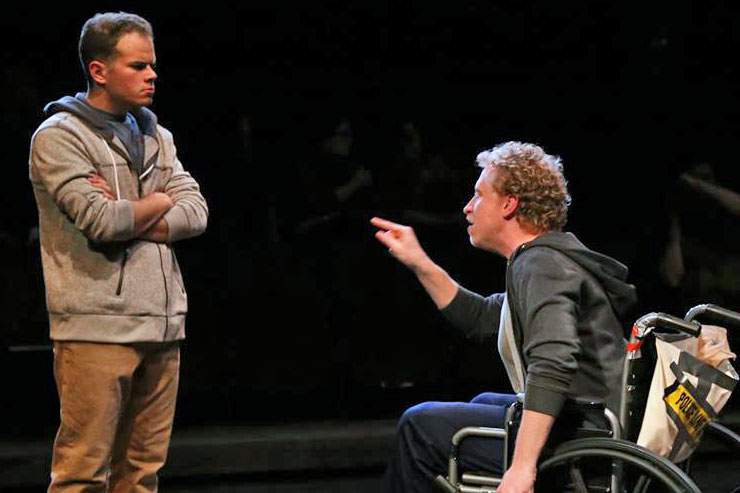 American Asteroid begins as Zach Decker playing Foster dashes into the house to the accompaniment of police sirens quickly ditches a bag of money, strips down to shorts and a tee shirt and innocently sits down next to Maddie Shea Baldwin, his sister Fiona on the couch watching TV to await the police.

Next to appear is Chris J. Handley as Ira the pair's abusive, creatively racist and at least slightly crazed father. Foster has three days to go before he does some jail time and father Ira, a wounded former police officer has more than a few tips for his son.

Ira arranges a tutorial for Foster with a local hood and fixer, Christian played by Ross Rebennack. The second act of American Asteroid opens with the accompaniment of barking dogs. In addition to his other varied and creative activities, Christian runs dog fights and the plays brings their sounds right to the living room. Rounding out the cast is Foster's boyhood friend, now police lieutenant Mikey, Austin Wilson.

The plot or plots of American Asteroid are very creatively worked out with lots of interesting and frequently surprising character development at every turn. Simplicity is not a virtue of this play, but complicated unexpected moves that then make sense are. I'd say it's closer to the baroque or even the rococo than the classical. This is a deeply thought through and thoughtful piece of theatre.

By the way, the asteroid of American Asteroid is a threat that causes chaos outside the house and adds to the tension within.

If you like the films Reservoir Dogs and Pulp Fiction plays like Sam Shepherd's Buried Child and Curse of the Starving Class this will be a special treat. If you don't care for that particular flavor of drama, I'd still say that American Asteroid is an assured, well-crafted play with interesting and well-acted characters in a production skillfully directed by Henry Woronicz