Alcina: It's All About Love! 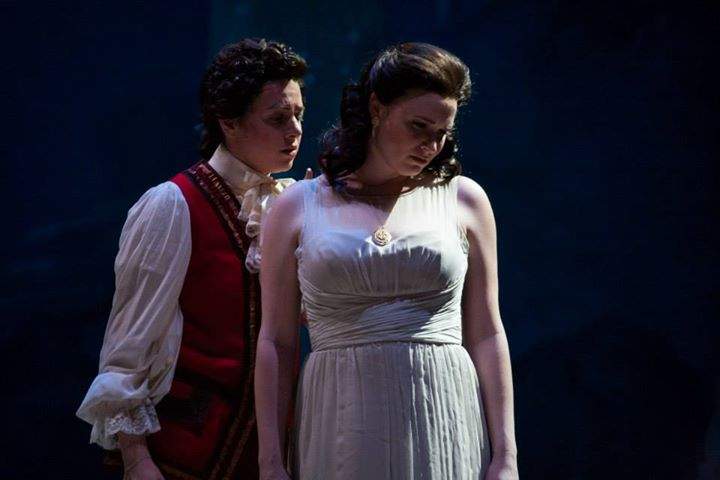 IU Opera Theater opens its spring with a lavishly produced production of Handel's hit from 1735, Alcina. Like the fall opener, The Italian Girl in Algiers, it's a rescue opera that's all about love. I looked in on a final rehearsal.

The basic plot is simple. A girl is out looking for her man, and for this show she puts on the pants.

Kaitlyn McMonigle and Rachel Evans share the role of the trouser clad Bradamante. They're both out to save their beloved Ruggiero from the sorceress Alcina. Baritones Eunje Cho and Ross Coughanour are the eye glass wearing, three piece suit clad, and briefcase bearing companions of Bradamante.

The part of the magically ensnared Ruggerio is played in pants by the convincing but certainly less than manly mezzo Deniz Uzun and the quite manly counter tenor Michael Linert.

The lead role of the evil sorceress Alcina is sung by Elizabeth Toy and Shannon Love. Alcina is simply a woman who hungers for love. That would be fine, but her appetite is quickly slaked and she has the bad habit of turning the lovers that she tires of into trees and rocks. The role of her much less evil sister Morgana is played by Kellie Motter and Monica Dewey. Tenors Christopher Sokolowski and Issa Ransom play Morgana's jealous lovers.

The opening act of Alcina moves at a stately pace. The IU production and Handel take their time in establishing the characters, people tell us what they're going to sing about and then they do it, in many cases with gorgeous results. In act two, there's more action and Robert Perdziola's set is very much a part of it. Parts open and close very much in an antique traditional fashion but with very modern and revealing insights to the drama and the emotions of the actors.

In the third act Handel rewards our patient enjoyment of all the solo work with a delightfully energetic trio and there's even a final quintet to celebrate the defeat of Alcina, the freeing of all her captives and the uniting of the lovers.

Conducting the performance is Arthur Fagen. Stage direction is by Chas Rader-Shieber.