Al Cobine And The Singing Hoosiers 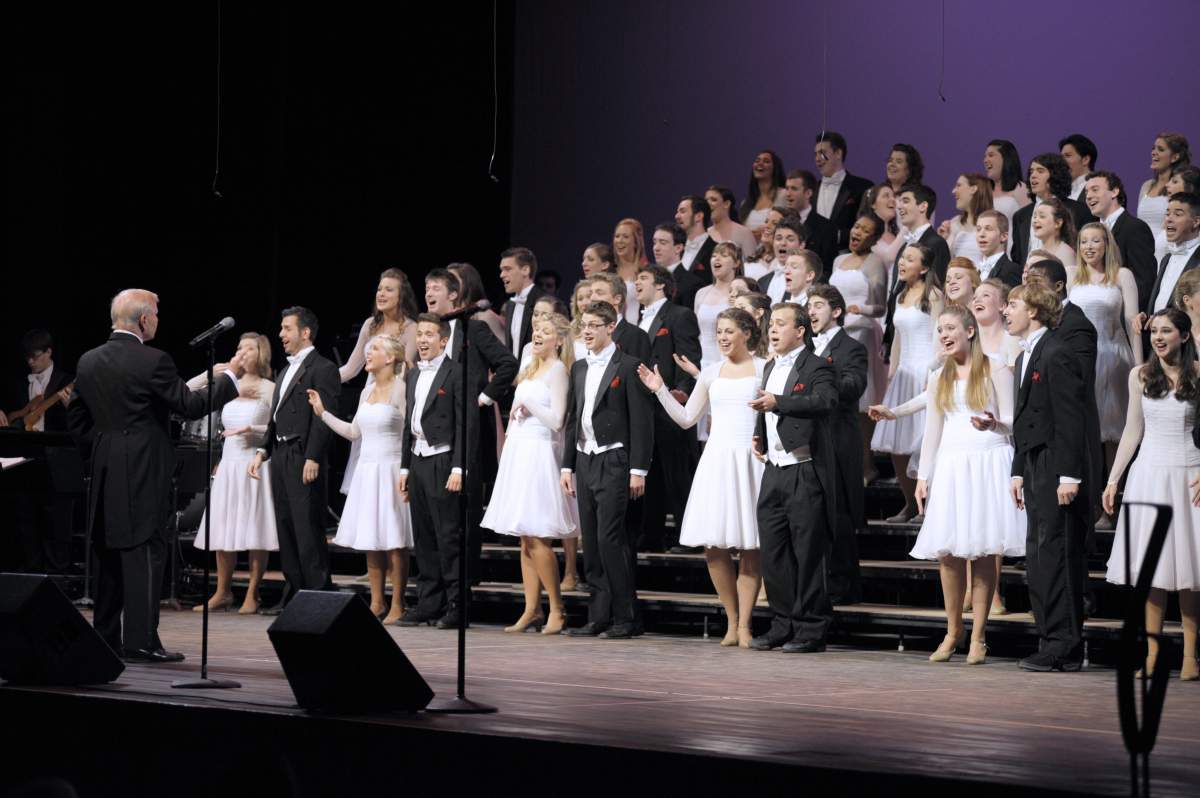 Saxophonist and composer Al Cobine donned many hats in his working career as a musician, leading a legendary Indiana big band for five decades and heading many large touring orchestras for stars such as Henry Mancini, Johnny Mathis, and Andy Williams.

But Cobine stayed busy close to home, too, performing for numerous Indiana University events and organizations. "Cobine's band could do anything," says Robert Stoll. "They could be in a pit for musicals, theater, play concerts and dances...they were extremely versatile."

Stoll served as director of the IU Jacobs School of Music choral group the Singing Hoosiers from 1963 to 1995. He often turned to Cobine for the bandleader's arranging talents. For years Cobine wrote arrangements that the group performed for homecoming variety shows, the Little 500, and other IU occasions.

A Singer Who Knew the Songs

Stoll thinks Cobine's own skills as a vocalist enhanced his ability to craft choral charts. "He was a magnificent singer. And that's part of why we were so successful collaborating for the Singing Hoosiers. Because he knew the voice; he knew what voices should do; he knew what voices could do."

Cobine's close attention to lyrics also contributed to the strength of his writing, Stoll says. "Always with an Al Cobine arrangement you knew he was aware of the song. Much like Tommy Dorsey – when he did a trombone solo, he knew the song. He knew the words. You can hear the words in how he plays."

Stoll cites Cobine's so-called "Day Medley" arrangement as one in particular that exemplifies Cobine's talents. "I asked him to make a medley of songs about going through a whole day," Stoll says. "And he started out with Ferde Grofe's 'Daybreak,' then 'Oh, What a Beautiful Morning" from Oklahoma!, "Lazy Afternoon" from The Golden Apple, "A Lovely Way to Spend an Evening," "In the Wee Small Hours of the Morning"... They're all different songs, different moods, but he just blended them together. I thought it was genius on his part."

So Vocal... So Instrumental

Cobine demonstrated an uncanny knack for arranging that often left Stoll and his colleagues comparing notes on how he did it.

"Several of us were talking once," Stoll says, "and I said, 'What is so fabulous about his choral arrangements is they're so instrumental, so symphonic.' And the guys started laughing. And they said, 'We were just saying talking about the fact that what makes his instrumental parts so great is they're so choral!'

"To me, that's saying the world about this magnificent talent that we had in this town for so long."