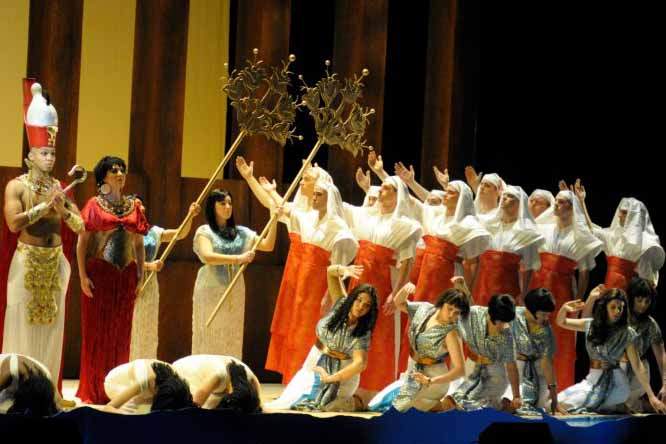 Philip Glass's Ahknaten at Indiana University Opera Theater is an energetic musical and visual spectacle. Scenes of the rebellious Egyptian crowds of the Arab spring open and close the story of a visionary Pharaoh who first led a rebellion against the old order and then was crushed by it.

Stage director Candace Evans worked closely with the dynamic set design of Doug Fitch and Linda Pisano's costumes. The result is a visual picture that fits very well with the flow and variety of Philip Glass's music. There are plenty of big crowd scenes, colorful costumes and pageantry. But they are balanced with intimate moments as well. I especially enjoyed the joyful creation, shiny brick by shinny brick of Aknaten's city of vision and later as the vision has failed and corrupted, its angry destruction.

Counter tenor Nicholas Tamagna was Saturday night's Akhnaten. His duet with  Nefertiti, mezzo Sarah Ballman that became a trio with  Queen Tye, soprano Olivia Savage was a lovely moment. Even more moving was a sensual duet with Ballman as the two embraced on a slowly revolving stage. A third high light was the chorus, assembled along the side aisles for the singing of Psalm 104.

Jeremy Johnson, Lorenzo Garcia and Jason Eck sang strongly as a resolute trio of the old order with tenor Garcia getting the most exposure.

Actor Ben Abbot had the role of the narrator, guiding the audience with readings from ancient sources and at the end actually playing the part of a contemporary tour guide leading a rowdy group surveying the ruins.

The production was in especially good hands as faculty members, conductor Arthur Fagen and chorus master Walter Huff are both veterans of an Atlanta production of Akhnaten.

Akhnaten has two more performances in Bloomington on March 1st and 2nd and then moves to Indianapolis's Clowes Hall for performances on March 8th and 9th.