Bloomington, Proud of "Aint Too Proud" 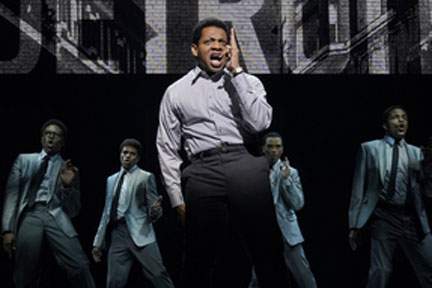 Derick Baskin as Otis Williams, the "backbone" of the Temptations

Aint Too Proud is a dynamic and nuanced musical about the life and times of The Temptations. The show traces the group of transplanted southern boys through their connection with Motown's Barry Gordy, and onto stardom. Wednesday night at the IU Auditorium the show debuted for an enthusiastically appreciative audience. Aint Too Proud's next stop is at Washington, D.C.'s Kennedy Center.

The show's technical crew arrived in Bloomington less than a month ago and the singers, and musicians came after Memorial Day. The Auditorium's resources offered the production the opportunity to work through the many technical and artistic features and challenges of the show. The community offered both a warm welcome and a varied audience for the show's opening.

Aint Too Proud  is a both uplifting and challenging story. Along the way for The Temptations there are constant obstacles, with artistic challenges, business conflicts and out and out racism dramatically presented. Internally there is anger, ego, alcohol and hard drugs and even simple age taking their toll.  Family life is all but impossible for a group that is so often on the road.

The production  is rich with the group's hits like My Girl," "Just My Imagination," and "Papa Was A Rolling Stone," and the signature dance moves that made the "Classic Five" Temptations part of cultural history. All through the drama it's the music and the artistry of the group that keeps the audience and the group moving forward together.

Wednesday night's audience was treated to a riveting production that showed the many resources of modern musical productions and the flexibility of IU's Auditorium. It was a very good fit with lots of technical smoothness on display. I especially enjoyed the way the rotating circular stage was used for everything from different views of the singing group to a wild bus ride through the south accompanied by gun fire. And I don't remember any previous production that slid four urinals and three sinks on for an informal meeting.

Throughout Wednesday evening Derrick Baskin was our host and commentator as The Temptations founder Otis Williams. James Harkness, Jawan Jackson and Jeremy Pope were his able and personable companions.  Each got to shine. Ephraim Sykes was a spark plug as the controversial lead singer David Ruffin. Candice Marie Woods shone with a trio as Diana Ross of the Supremes. Jahi Kearse was quite wonderful as Motown's restrained, almost school marmish, Barry Gordy.

This Sunday night the 2018 Tony Awards  will be on television with a look at the award winning shows of the past year. Next year, I think that a lot of the IU Auditorium audience will be able to tell friends, "I saw it first "when scenes from Aint Too Proud are the hit of the 2019 Tonys.