Ado, Ado And "Much Ado" At The IU Festival Theatre 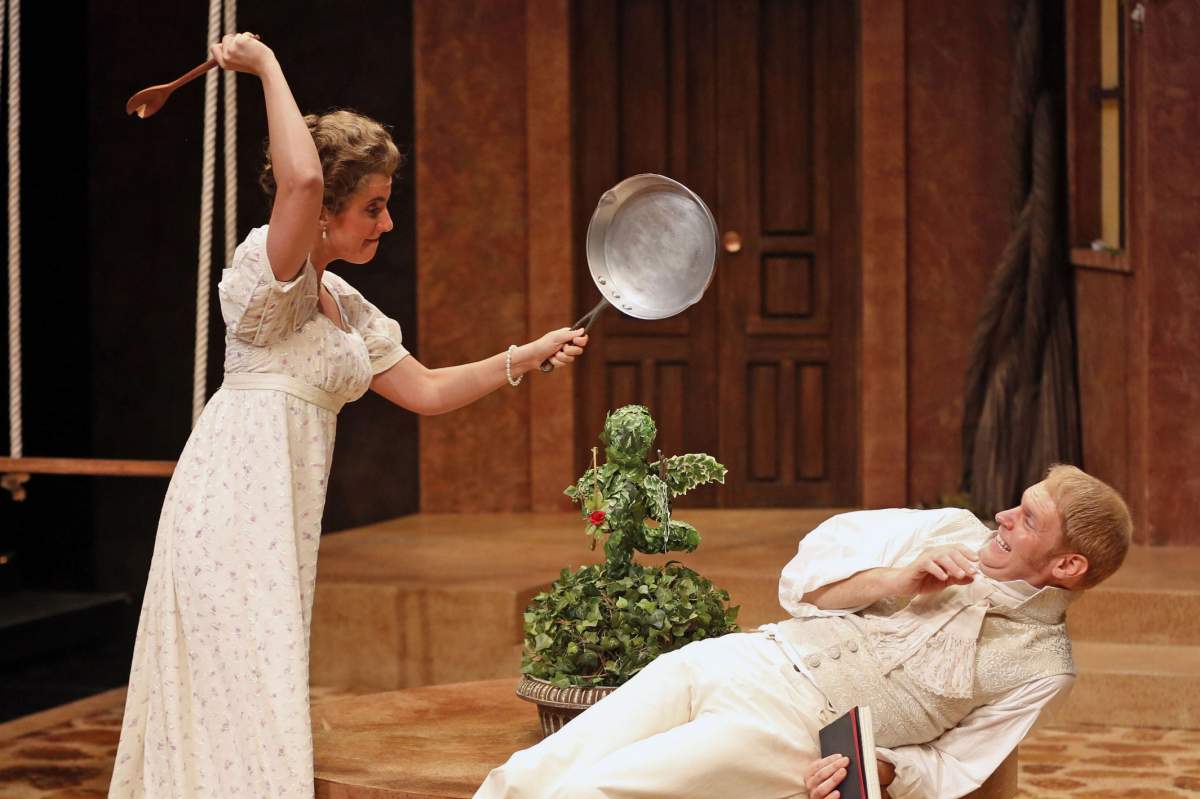 Much Ado About Nothing at the IU Festival Theatre is great fun. It's Shakespeare high and low. There's eloquence, elevated wit, bawdy wit, buffoonery and more than a few prat falls.

Things begin as Claudio, Nicholas Bailey, a dashing visiting lord from Florence falls in love with the lovely Hero, Emily Harpe, from Messina and the play ends in a dance following their joyful wedding.

In between there is plenty of action. There are two plots. In the first  the evil Don John, Adam St. John  seeks to break up  Claudio and Hero's  wedding plans. Don John's wily servant Borachio, Grant Niezgodski, arranges to have Claudio see him with the bawdy gentlewoman Margaret, Mara Lefler, making love at Hero's window. The too gullible Claudio is incensed and accuses Hero of infidelity at their wedding.

In thesecond plot. Family friends scheme to bring  the proud bachelor Benedick, Grant Goodman, and the emphatically single Beatrice, Andrea Mellos, together. Goodman was delightful in his witty banterings and even more fun as he prowled through the audience to hide while overhearing the plotters ensnaring him and Beatrice. Andrea Mellos was his equal in wit and comedy as the emphatically single Beatrice and later more than his match in rage over the outrage to her cousin Hero.

Emily Harpe was affecting as the pathetically wronged Hero, accused of infidelity on her wedding day, apparently dying of chagrin. Ken Ferrell had the difficult role of Leonata, first her proud father and later the furiously angry tyrant.

Fortunately Don John's accomplice Borachio is taken in his lying by the watch headed by Dogberry, Tim Pyles. It takes a while for the truth to come out as Dogberry is a man "too cunning to be understood."

Through a complicated second wedding, Claudio and Hero are united in a return of innocence. Beatrice and Benedick, though a good deal more circumspect about it, are wed as well.

Although the play is called Much Ado About Nothing   and one of the final lines is simply "Man is a giddy thing," there's a good deal more than nothing here. There are broadly painted and thoughtfully worked out, nuanced characters in a vision of a society with multiple layers. It is very well directed and skillfully acted evening of theatre.

Direction is by Jonathan Michaelsen, The nicely appointed set is by Andrea Ball. Attractive costumes for the women and handsome uniforms for the men are by Katie Cowan Sickmeir. Andrew Hopson is responsible for the evocative sound design.

Much Ado About Nothing  continues in the repertory through July 27. It will be joined by The Matchmaker beginning on July 12.