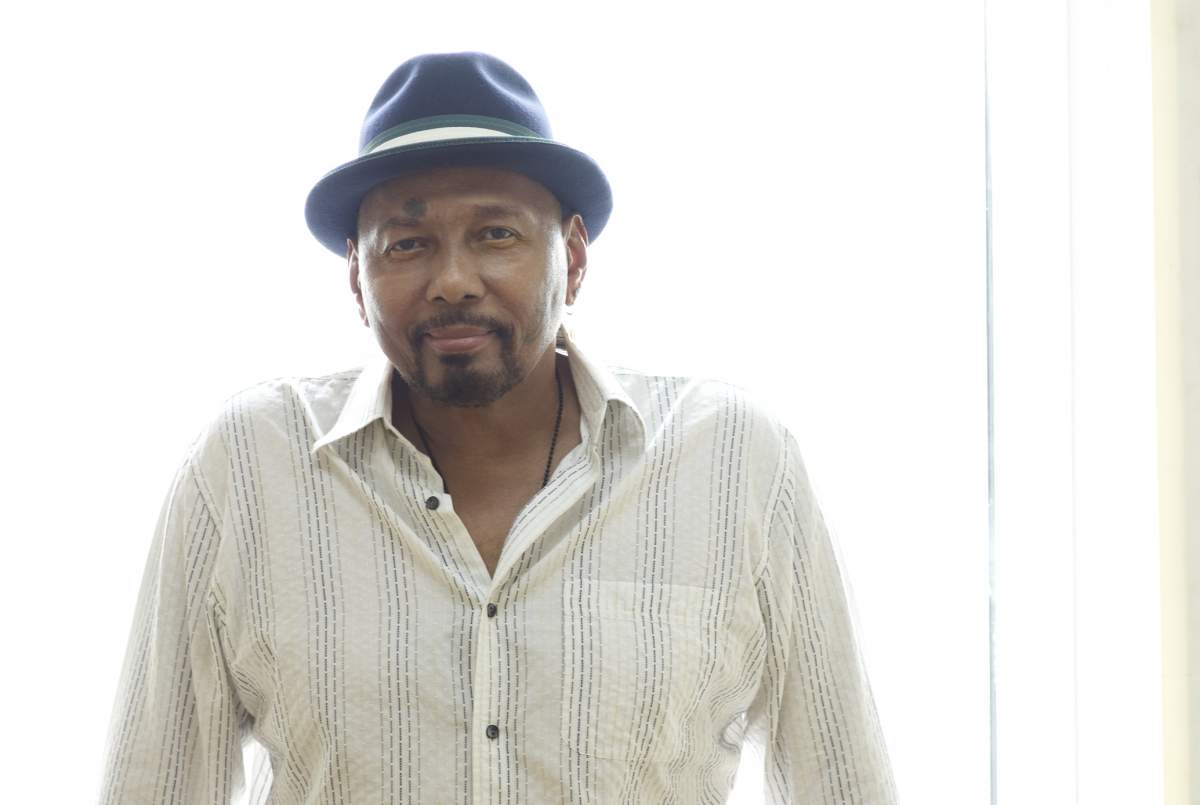 Having made extensive forays into the genres of R&B, gospel, and country over the course of his nearly 50 year career, singer Aaron Neville has recently moved back to his roots in doo wop music. In 2013, he released a record of all doo wop era covers called My True Story and has taken those songs on the road. WFIU's Mark Chilla got a chance to talk with Aaron Neville about his recent work before a concert on Friday, January 17th at the French Lick Resort.

MARK CHILLA: Let's begin by talking about your newest album, My True Story, an album of mostly doo wop era songs, and a few songs after the doo wop era. What is it about these songs that speaks to you, personally?

AARON NEVILLE: Well, it's the stuff that kind of honed me in to what I wanted to do as a child, really. My brother Art worked at a record shop. He would bring home the songs by Sonny Til and the Orioles, and The Clovers, and Billy Ward and the Dominoes, and Hank Ballard and the Midnighters, and all these songs. Most of them were like pure, innocent songs. And that's one thing I like about it. It keeps the child in me.

Doo wop was the love of my heart. Everything I've done you hear some doo wop essence in it.

CHILLA: Doo wop seemed to be a big influence on you as a young performer, so what's your first memory of performing doo wop music?

NEVILLE: In the Calliope projects in New Orleans, my brother Art had a doo wop group. I was about 11, maybe something like 11 or 12. They used to run me away until they figured I could hold a note, then they let me sing with them. They showed me how to do the harmonies and all. It was my brother Art Neville and a guy named Issachar Garden. Issachar, that's one of the names from the Bible, I just called him Izzy-Coo. [laughs] But they were great singers. They would go around and win all of the talent shows in New Orleans and get all the girls and things. They finally let me sing with them. But the doo wop was the love of my heart. Everything I've done you hear some doo wop essence in it. Everything. I don't care if it's spiritual, or country and western, or pop, or what. The doo wop is there.

CHILLA: What do you consider to be the doo wop essence, then?

NEVILLE: It's just those little licks, like little curly cues, like [sings]. You know, end the song like that or something. And just the tone of the voices. I like the way they sing with the Flamingos, the Moonglows, and Pookie Hudson and the Spaniels. All these guys. Sam Cooke-well, Sam, I heard him with the spiritual, but that was like doo wop too because there was harmony.

CHILLA: I'm just picturing this now: a young Aaron Neville, singing doo wop with his brothers and his friends. Which part-I'm a singer myself-which part was yours in the harmony? Were you doing lead, were you doing the high falsetto?

NEVILLE: I did the high falsetto, I could do all of them. I can't do them all at once, yet though. [laughs] I could do the bass, I could do the harmonies. I've done some stuff where I did all the harmony. I did a duet with this guy Rob Wasserman, he's a bass player, and we did "Stardust." I did it like Billy Ward and the Dominoes, and we recorded it at Willie Nelson's studio in Austin, TX. I did all the harmonies, plus the lead vocal. And I did the "Mickey Mouse March" with Dr. John playing keyboards, and I did all the [harmonies]. A doo wop version of the "Mickey Mouse March."

CHILLA: This new album, My True Story, features a few doo wop singers performing with you, like Dickie Harmon of the Del-Vikings. But the one name that was, at least to me, a bit unexpected was Keith Richards, Rolling Stone guitarist, who also co-produced it. How did he get involved in this process?

NEVILLE: Well, when I started talking to Don Was about it, who's the president of Blue Note Records, he remembered that, [when] he produced Voodoo Lo- uh, Voodoo something with the Stones... you know, the album?

NEVILLE: And he was rooming underneath Keith, and he said that Keith would have this album on a loop over and over, and it was "My True Story" by the Jive Five. Also, the guy Eugene Pitts is singing background on the record [Neville's My True Story], who sang the lead and wrote that song.

But me and Keith used to talk about it whenever we get together anyway, he said, "Man, I've been hip to your songs since the early 60s." And we start talking about different songs. And between talking to him and talking to Paul Simon, and Frankie Valli, we all felt like we grew up in the same neighborhood. Listened to the same songs.

CHILLA: So, I want to talk about-you said, Don Was from Blue Note-so, you've recently moved to Blue Note. How did you get picked up by Blue Note records in the first place?

NEVILLE: Through Don Was! We have a history together, we've done stuff he recorded. I did the song "Crazy Love" from the movie Phenomenon with John Travolta, and he produced that. He and I have a Grammy with Tricia Yearwood on "I Fall to Pieces," he produced that.

CHILLA: I've always been curious how much record labels kind of dictate the creative process behind the album. So, how has your experience been so far working with Blue Note? Or perhaps to phrase another way, is your approach to making the album any different depending on the record label?

NEVILLE: This is the most freedom I've had in a long time. They were producing it, but they gave me free reign to do what I felt. We went originally with 12 songs to do, and we wound up recording 23 songs in five days. Everybody was having so much fun, cause I kept saying "Oh, I want to do this!" and they said "Alright, let's do it." So I have songs left over for Part II of My True Story.

CHILLA: Have you taken these songs out on tour with you, I'm guessing?

NEVILLE: Yeah, we do some stuff off this record, off the old records. You know, we mix it all up.

CHILLA: What's the audience reaction been like to those songs?

NEVILLE: They love em. Most of them singing the words to em, you know.

CHILLA: Everything people grew up with, yeah.

Blues On The Horizon

CHILLA: So, Aaron, you're an artist who has dabbled with many different genres, you're always trying out new things: R&B, pop, country, gospel, now doo wop. What's next on your horizon?

NEVILLE: I've never done a blues album. I've been thinking about [it], I would like to do that. You know, I've sung the blues in my career, but I've never actually done a blues album. Like B.B. King, Little Junior Parker, Guitar Slim, and those guys from back in the day. Some Ray Charles, or whatever, you know. Jimmy Reed. I was into the blues, I was into any kind of music back in the day. But the doo wop was what wrote on my heart and my soul all these years to where I am today.

CHILLA: So, Aaron, you and your music are so closely associated with the city of New Orleans. I read, after Hurricane Katrina, you had to relocate out of your home in New Orleans, I believe initially to Nashville and then to New York City, if I remember correctly. What was that transition like?

NEVILLE: I mean, it was life. A whole lot of stuff was happening in those days. My wife Joel, my first wife Joel, was diagnosed with lung cancer in â€˜04. After the storm, we figured we're not going back to New Orleans. We can't. Our home was gone. My home, my children's home, everybody's home went underwater. I had to be somewhere where she could have hospitals, and we were there by the Vanderbilt Hospital in Nashville. She passed in â€˜07. January, matter of fact, it was just the seven year anniversary of her death on the fifth of January. So, that was some hard times. I couldn't go- all my memories of her was in New Orleans, I don't want to live in New Orleans no more. I'm remarried to my wife, Sarah, and we're happy right here in Manhattan in the Village.

CHILLA: Do you find a lot of inspiration in this new location, in New York City?

CHILLA: Are you writing songs these days at all?

NEVILLE: Well, I write poetry. Some of the poetry turns into songs. I did a book of poetry. I did a limited edition of them, and we sold them out on the road. So, maybe I'll make a Part II because the phone is full of poems. I got maybe about 70 poems in my phone. And I'm working on some of them right now to put music to them.

CHILLA: Who are you working with?

NEVILLE: Some of the guys in my band have been working on some of the things, putting some music to a few of them. Different people. Blue Note sending some people over to write with me.

CHILLA: I have one last question for you: Aaron Neville, what kind of music are you listening to right now?

NEVILLE: Yeah, that gives me a chance to do the bass part, the harmony, and the high part, the falsetto.