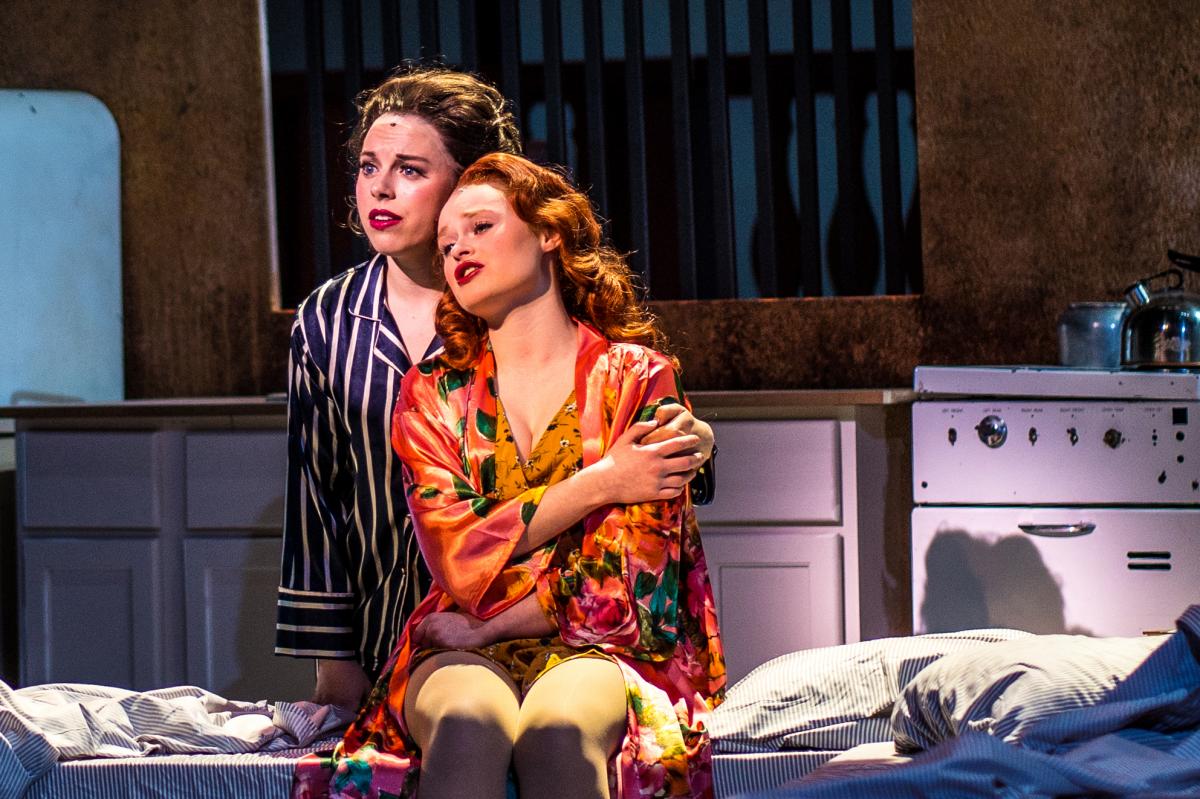 Those are the energetic opening notes that Music Director Terry LaBolt and his group played as IU’s wonderfully assured production of Wonderful Town began. The lights came up on Jeremy Smith’s whimsical scenic design and the IU company in Justin Gannaway’s varied costumes danced DJ Gray’s paean to the characters of New York’s Greenwich Village in a scene narrated by the tour guide, Luke Major.

Wonderful Town from 1953 is based on Ruth Sherwood’s stories of the struggles that she and her actor sister Eileen endured as they moved from Ohio to New York in the 1930s. The lyrics are by Betty Comden and Adolph Green with music by Leonard Bernstein. In an era that was rich with musicals about women, who found their future with men this emphasized the writer Ruth, Cassia Scagnoli and the actor Eileen, Katie Swaney’s sisterly bond.

Ruth and Eileen begin their odyssey in a basement apartment curated by Daniel Meeks as their artistic landlord, Appopolous. Their first receptions in New York are not welcoming. Ruth’s writing, a bit too much like Hemingway, and Eileen’s dancing, not quite up to an audition both lead to disappointment. But Ruth’s determination and Eileen’s charm begin to work.

As newspaperman Chick Clark, Jake McCutcheon woes Eileen he has Ruth sent off to Brooklyn’s Navy Yard. She meets up with a crew of Brazilian sailors and in an uproariously funny and wild scene teaches them the Conga. Ruth gets a great story and a press pass out of the encounter. Eileen, learning of Chick’s ruse gives him a boot in a tender place.

Meanwhile, the neighborly football player Wreck, Connor Bernard delivers an energetically danced encomium to his collegiate football career. I don’t know where to put this in, but Jenna McDermott playing the local prostitute Violet is a separate and quite satisfying entity. She has a bit of gravitas that’s not found anywhere else in the show.

Eileen has ensnared Frank, the charmingly lorn manager of a local Walgreen’s and she somehow ends up in jail. Ruth dashes to the jail to rescue her sister and finds that Eileen’s charm has reigned and she’s simply taken over the place. The cop on the sister’s beat, Officer Lonigan, Justin Smusz has decided that Eileen is Irish and in a scene that could have featured Dennis Day and the cast of River Dance, they salute her questionable connection with the olde sod.

Ruth is both impressed and a feels a little envy. The original stories and the book for Wonderful Town were titled My Sister Eileen. Good things are ahead. Eileen is asked to sing by Speedy Valenti, Sam Sanderson. She’s nervous and asks Ruth to join her for their old standby, the “Wrong Note Rag.” It’s a success as the whole cast joins in the dancing. And Eileen has all along noted that Bob Baker doesn’t know it, but he’s in love with Ruth. She clues him in, but the finale features the two sisters in a quick embrace.

The lighting is by Qi.er Luo and the sound design Jared O’Brien. Bringing all the elements together is director Richard Roland

Wonderful Town at IU’s Ruth N. Halls Theatre plays April 12 through the 20th. If a delightfully, fresh, funny, meaningful musical is to your taste, this one is for you.