If You See Me Forgetting You: A Neverland Adventure 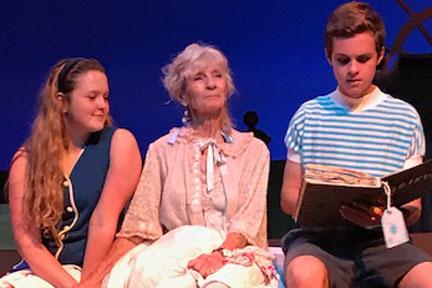 Gramm Wendy, Kate Braun listens to one of her own stories with her grandchildren, Maggie Amanda Rooksberry and Amos, Jackson Janowicz

If You See Me Forgetting You at the Shawnee Theatre of Greene County is Jonathan Golembiecki’s play that envisions further developments for J.M. Barrie’s Peter Pan and Wendy. Wendy, Kate Braun is now an elderly grandmother suffering from Alzheimer’s. Her son George Darling, Rory Behrens say that “Gramm” has a lot of memory boxes that sometimes she can’t get into and sometimes she mixes up. Jackson Janowicz and Amanda Rooksberry play her grandchildren, Amos and Maggie.

The teen aged Amos is fascinated by the tales from the Peter Pan Story that his grandmother told him when they were both younger. He plays Peter with his willing friends and then loses them when he insists on switching to play Captain Hook. The comical discomforts of this switch show up later in the play.

There’s no fairy dust in Golembiecki’s tale, but there is a quite wonderfully magical flying trunk that takes a delighted Amos and a much less willing Maggie to a Neverland. On stage at Shawnee there were lots of little pirates led by Adam Lewis as Captain Hook and Rory Behrens who doubles as his lieutenant Smee. And there was a whole troupe of little lost boys (and girls) led by Courtney Slough as Nibs and Kennideigh McKee as Slightly.

Darl Horning, who does a nice tableau as a London statue of Pan appears as Peter, the boys’ leader and Hook’s nemesis. I can’t say that I followed the logic of the plot with much success, but in the spirit of the night I didn’t let that bother me. Peter and the Captain do switch parts and hats for some quite comical interchanges. Adam Lewis as the captain is a droll comedian and Horning quite fulfills the energetic aspects of his role. Rory Behrens makes a quite suitable Smee and even led the audience in an energetic ukulele sea song.

Throughout the show, directed by playwright Golembiecki, the gang of pirates were a disciplined little band of neatly choreographed dualists and a somewhat more reluctant, but willing dance troupe. The lost boys (and girls) made spirited appearances and both groups moved quickly and expertly off and on the stage. The enthusiastic and supportive opening night audience was quite full of children and I’m betting that there were sisters, brothers and friends of the actors.

David Wade’s fanciful design mixed realistic elements of a bedroom, a fireplace, a pirate ship, the magical trunk and lots of different levels to accommodate the small and large groups. As the play ended it appears the local London constable is headed for Wonderland through the trunk while the Captain and Peter departed for that “second star to the right.”

There are just three more chances to experience Jonathan Golembiecki’s …Neverland Adventure…If You See Me Forgetting You, tonight and Saturday night at seven and Sunday at two.