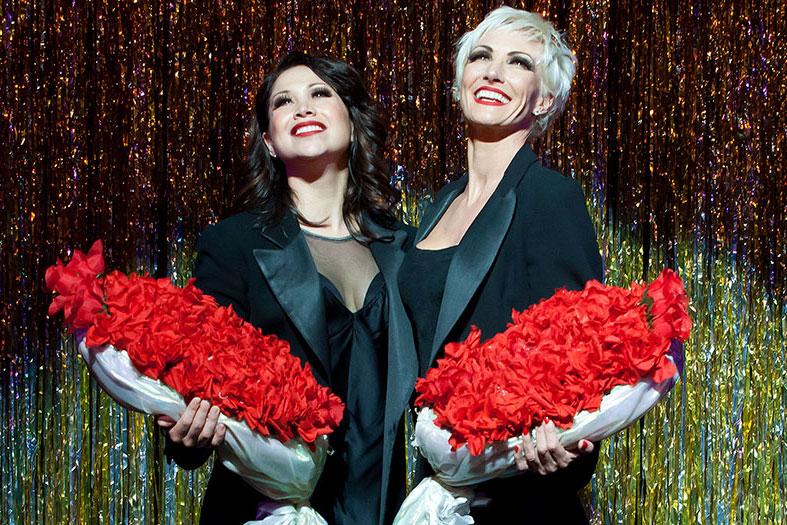 Chicago, the longest running musical in Broadway history opened Wednesday and continues this evening k at the IU Auditorium. It's an energetic show with memorable well-drawn characters and lots of sweatily athletic dancing. On stage there's an eloquently full orchestra. It's a brass band with one violin, a banjo and all those corny percussion parts that we may remember from Saturday morning cartoons.

When the show opened in 1996, Bill Clinton was President. The show seemed dark, edgy and even a bit political. Since then with ‘Orange is the New Black' we've gotten less amazed by women behind bars, domineering matrons and also lawyers on the make.

As the ladies of Chicago document their crimes in the "Cell Block Tango" all except the headline grabbing Velma, Terra C. MacLeod and the pathetic Hunyak, Alexa Jane Lowis play them for laughs. Later the conniving matron, full -voiced Jennifer Fouché sang one of her signature song with good humor and an audience amusing ending.

Peter Lockyer makes an outstanding appearance as the smooth era baritone lawyer Billy Flynn. His appearance is a bit of a tribute to vaudeville's Sally Rand and her own more risqué fan dancing. Lockyear has the period vocal style and its graces down perfectly. If you close your eyes, you're back on 42nd Street.

Dylis Croman is Roxie Hart, the evening's other storied femme fatale. Her struggles, first just to escape hanging and then to keep her name on the front page of the gossip columns actually becomes moving. Especially when Roxie is paired with harder edged Velma of Terra C. MacLeod her mid stage pathos left the audience a bit chastened and quiet.

But generally comedy rules. The towering D.Ratell played the reporter Mary Sunshine with the appropriate uncritical open heart, open eyes and open vocal chords. In some performances, when Mary whips off her wig, it's a bit of a shock. Wednesday night's audience seemed well prepared.

Rotund Paul Vogt was Amos Hart, Roxie hapless husband. Whether as her punching bag or on occasion when he spoke up for himself he was a favorite. His gentle delivery of the song "Mr. Cellophane" about being generally ignored in life reminded me just a little of the great sad circus clown, Emmet Kelly.

The opening night audience at the Auditorium gave the hard working cast and orchestra a standing ovation with special applause for the lawyer, the matron, the murderesses and the hapless husband.

Tonight at seven in nearby Woodburn Hall Joshua Robinson continues to start the evening off with a lively half hour on Vaudeville's history that takes us right up to Chicago's first failure in 1975 and its success beginning in 1996.

Curtain for Chicago the Musical in the Auditorium is at eight.