A Tuneful Night At The “Little Shop of Horrors” 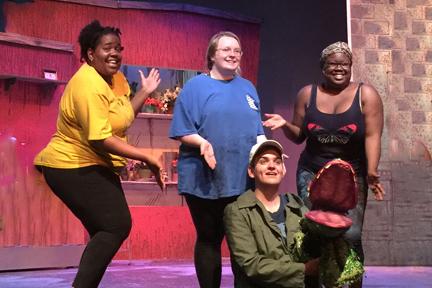 Shawnee Theatre in Bloomfield is doing a really good production of Howard Ashman and Alan Menken’s Little Shop of Horrors. It’s the story of clumsy florist shop worker who raises a plant that eats human blood and flesh. The musical is based on a low budget black comedy from 1960. The music by Menken leans toward the sounds of sixties rock, the tight girl trios and early Motown. Ashman’s words exploit the ballad sounds of the era, the bluesy feel and even some fast patter.

The cast at Shawnee is a very strong one with good singing and acting from all. Seymour, Oliver Daniels is a central sympathetic figure as the hapless florist/ He’s quite in love with the lovely assistant Audrey and the custodian of the growing and demanding plant. Mikayla Cohen is simply the perfect Audrey. Her accent is richly New York, her singing is personable and powerful. She’s the pathetic blond bimbo raised to the n’th degree.

Rory Behrens, last seen as the redoubtable pirate Smee in Neverland, is here quite the merchant as Mushnik the owner of the flower shop and Seymour and Audrey’s employer.  Behrens was very much the grouchy owner and the mock Jewish wedding scene as he adopts Seymour was very funny.

Darl Horning, Bloomfield audiences may remember him as last week’s Peter Pan in Neverland, is the abusive boyfriend of Audrey and the pain loving dentist, Orin. Jack Nicholson had the role in the original and Steve Martin plays him in the later film. Horning brings a wonderful attractive charm to the role and his uproarious laughter punctuated his every move. Earlier he did duty as a neighborhood wino and later reappears as a series of agents, out to tempt Seymour with an every growing series of contracts for a TV show, magazine appearances and general show biz representation.

Jamila Hunter, Allee Taylor and Missy Taylor appear as the neighborhood ladies and the trio of Crystal, Chiffon and Ronnette. Yes, they’re each named for a girl group from the period. Their singing set the tone for the show and they did a nice job of carrying their parts of the developing neighborhood atmosphere.

Audrey, the plant starts out as a clever hand puppet and by the second act has grown big enough to handle full sized humans for its diet. Initially, Orin the dentist suffices, but later it is Mushkin, Audrey and finally even Seymour who vanish. The eloquentl big voice of the Motown style singing hungry plant comes from the show’s director Adam Michael Lewis. Yes, he was last week’s Captain Hook.

Musical direction is by Brian Samarzea and it’s a tribute to him and the cast that things work so well. Most of the words come across, but I did wish that the balance was a little more for a musical and little less for a rock concert. The set designs are by the resourceful David Wade. Zechariah Saenz’s costuming help tell each character’s story.

Thursday’s well satisfied opening night audience rose to its feet when Mikayla Cohen as Audrey joined the cast for the curtain call and as they left I heard people saying they were “going to tell friends about this one!”

The Shawnee production of Ashman and Menken’s Little Shop of Horrors plays two weekends, July 5-8 and 12-15 at the theatre in Bloomfield.