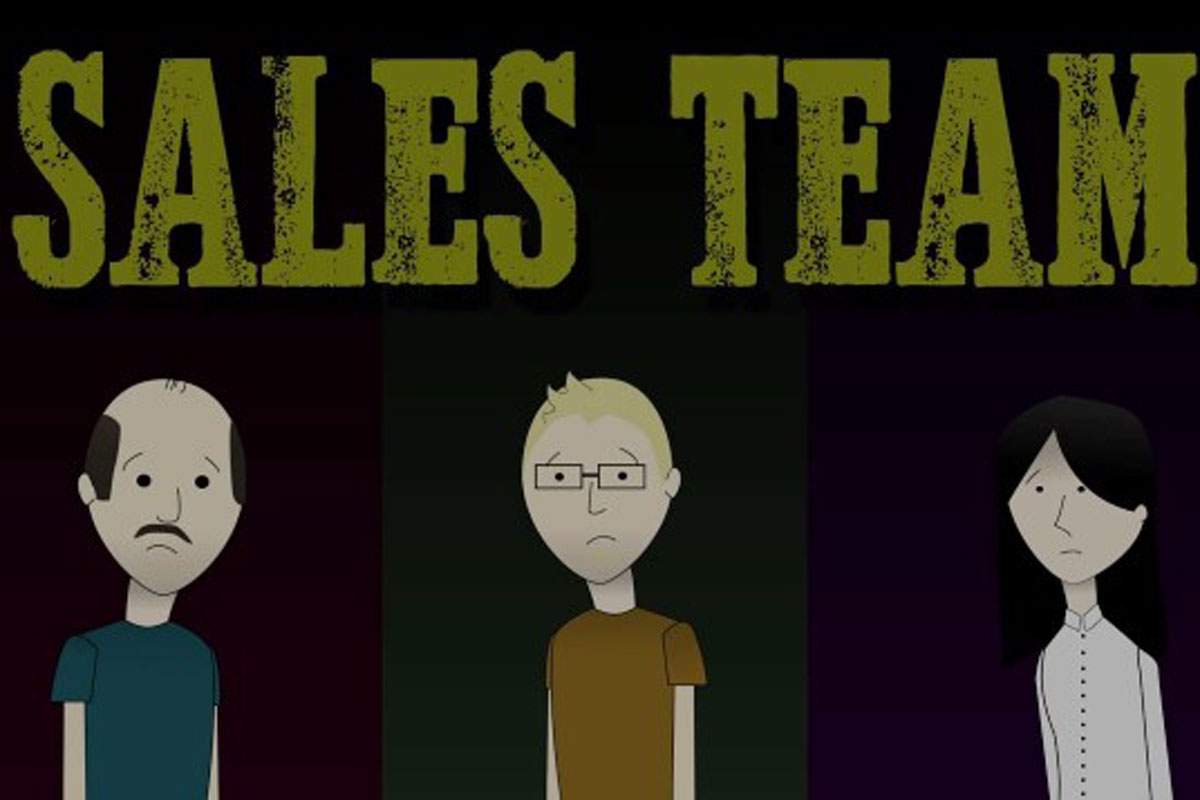 Thirty Day Mourning Period by Hank Greene at the Bloomington Playwrights Project is the Reva Shiner Comedy Award winner for 2016. Since1993, the annual Reva Shiner Full Length New Play Contest, has brought submissions of scripts from all around the country, including work from both established and up-and-coming playwrights. Greene's anonymously submitted play was selected from hundreds of submissions. BPP fans actually have seen his work with the company's Blizzards and Vintage Scenes.

Thirty Days of Mourning begins as the sales staff of Hamilton Media Center arrive for another day of work. At the desk on the left Larry, Steve Scott is the clearly the leader as he finesses a sale by lying to a client about an imaginary conference. Almost hidden at his desk, Craig, Paul Kuhne seems unsure of whether he will continue to stand or sit. Coming in at the right is Aubrey Marie Seader, the flustered Susan. She complains that she can't remember the last twenty-two minutes of her life and that things seem way out of control.

There's a bit of sympathy from the still standing Craig, none from the hard driving Larry and Susan continues to wonder about things from her drive to work to her relation to the cosmos. Meanwhile three begin to wonder about the whereabouts of their usually punctual boss, Mr. Clybourne.

One of the neat things about Greene's play is the way he handles official e-mails to the team. Larry's computer chimes and the dark clad Tory Gough and Erin Parks appear to chant messages from Human Resources. The main message is that their boss, has committed suicide and that the office has the play's title Thirty Days of Mourning. For a month the three have no goal driven work, no dress codes, no corporate oversite. No responsibilities.

Naturally, the dedicated Larry is the hardest hit and he even tries to continue working. Craig, who's been rather passive becomes even more so. He's saddened by the death, especially as in a rare moment of enterprise he brought in a birthday cake. It's Susan who sees the possibility for a palace revolution and she drags the others into rebellion.

The neat office with its three desks, filings cabinets and a bulletin board becomes a castle. It's a real mess, but a very creative one. There's a look out, battlements, various levels, and even a draw bridge. Scenic Designer David Wade and Props Master Barb Steininger have created a setting that would gladden the heart of any gang of seven year olds.

The distracted Susan becomes a pamphleteer with a radical plan to humanize their work place and relations with clients and one another. She's also a sword wielding Lady Susan. The mild Craig is caught up in the energy. He's wearing a crown made up of scraps of office forms and wielding a battle axe. Even the most resistant Larry becomes a convert swept up in the magic of the proclamations and the creation of castle. When Larry finds a suicide note from their old boss that supports all of their concerns he makes it into a flag for the castle.

Steve Scott was very effective as the super salesman Larry and the gradual convert to Susan's values. Paul Kuhhe did very well with the difficult role of a character who at least initially is pretty inactive. He projected his inner turmoil. Aubrey Marie Seader handled the dramatic role of Susan from irritatingly ditsy, through inspired, to committed with aplomb. Tory Gough and Erin Parks as the voices of Human Resources actually drew applause for a couple of their appearances.

Thirty Days of Mourning is a nicely put together comedy with a satisfying comedy in an unlikely setting. Although laughs did come in the first act things were even more focused and effective in the second. It's a worth winner of the Reva Shiner Comedy Award.

I can't close without mentioning Associate Artist Director Ben Smith's very creative approach to the traditional BPP welcome and listing of corporate sponsors. By reversing their titles in mock heroic fashion, he had all of us in the audience working to put the names back together.