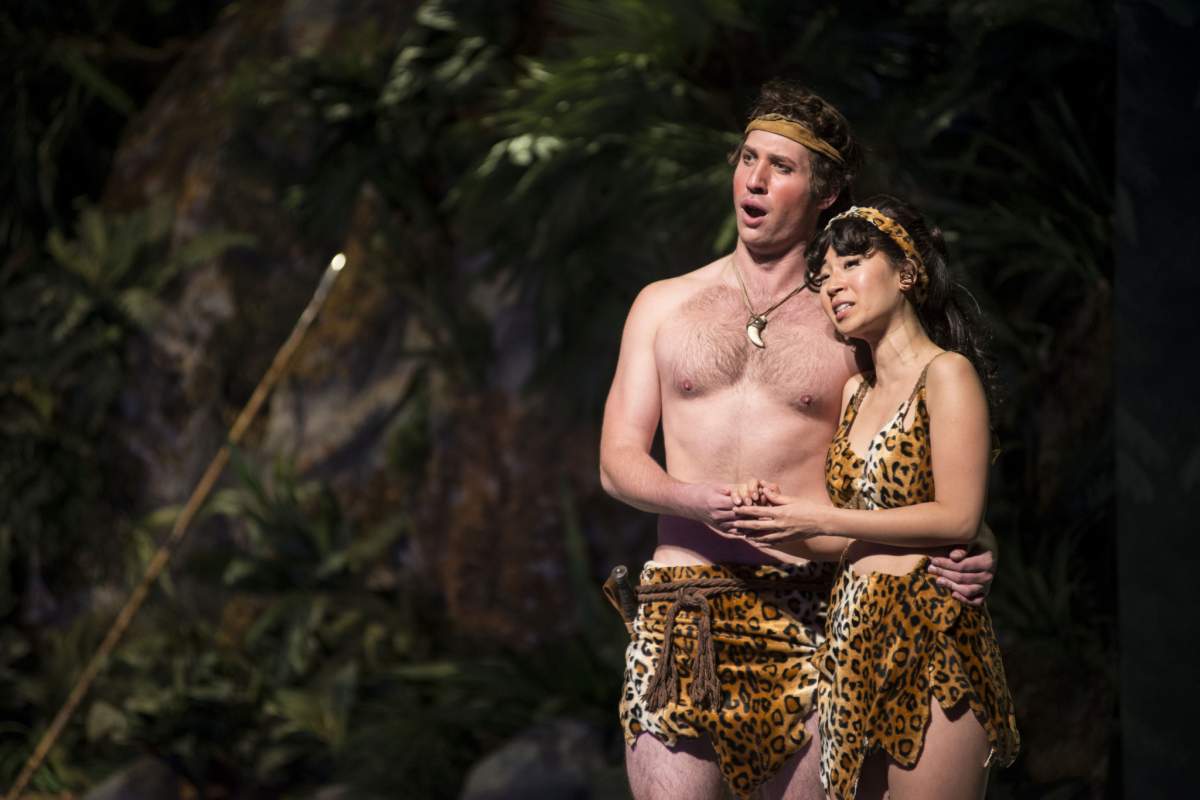 Opera and musical fans who think that all Gian Carlo Menotti wrote was the elegiac Amahl and the Night Visitors should be ready to be quite delightfully amazed with IU Opera Theater's production of his The Last Savage. I got a sneak preview at Thursday night's dress rehearsal.

Who knew or even suspected that Menotti could write the words and the music for an international satire on love, politics, and the arts that still seems fresh, charming and new fifty years later?

The Last Savage is at its heart a silly love story. Mr. Scattergood, Reuben Walker, an American millionaire an equally wealthy Maharajah, Andrew Richardson, seek to unite their fortunes with the marriage of the marriage of their children. Neither the American's perky grad student daughter Kitty, Angela Yoon, nor the Maharajah's somewhat sulky son Prince Kodanda, Will Perkins, are particularly interested in the match, but major fortunes are at work.

The Maharajah's complex of family problems and the millionaire's complex of management issues are very neatly and amusingly dramatized, sung about and acted out. The marriage is tentatively agreed upon, but first the daughter demands the right to search India for a primitive man and to civilize him for her thesis. The two fathers hire a young man, Abdul, Eric Smedsrud, to play the savage. Complications, as they say, ensue.  They're all stock tropes from the musical comedy, operetta and opera closet, but Menotti's opera makes some of them quite fresh and all of them welcome.

Abdul, the faux savage is caught and tamed by Kitty. Then he's treated to a mind numbing display of what passes for culture at a monster reception. There are competing religions that all claim to have the correct address for god, and philosophy that says there is no God.  An Andy Warhol look alike does a Jackson Pollack style mechanical painting. A peace signing poet mouths doggerel. A trio and a vocalist satirize the hard edged abstract classical music of the 60s. It's all overwhelming, but very funny. Abdul has a quite appropriate melt down and flees back home and out to a cave in the jungle.

It's a pinnacle of the action…Will Kitty get back together with Abdul or marry the Prince. Will the Prince have to marry Kitty or might he wind up with the family servant Sardula, Olivia Yokers, that he's always pined for? And what about the running gag between Mr. Scattergood and the Maharajah's wife, Olivia Thompson, about a bit of past history that may be more than just a bit?

I've shared some of the story with you, but haven't touched on the very colorful production. The stage design is full of modern approaches mixed with old style tricks for the eye that seem to take scenes miles deep into the stage and right up front as well.  The singing was assured and strong. Acting by all was very good. The dancing by the Maharajah's multi tattooed servants is simply hilarious.

IU Opera Theater's production of Gian Carlo Menotti's The Last Savage conducted by Constantine Kitsopoulos with stage direction by Ned Canty is a shamelessly campy, very colorful production that works hard to please, and please it does. There's more than enough music and vocal display for opera fans and plenty of spectacle and action for those who prefer musicals.

The Last Savage plays November 14, 15, 20 and 21 in the Musical Arts Center. You can find this review and an interview with singers who play the "savage" on our web site at WFIU dot ORG/arts.