Partly Fact, Partly Fiction, And Completely Beside Ourselves 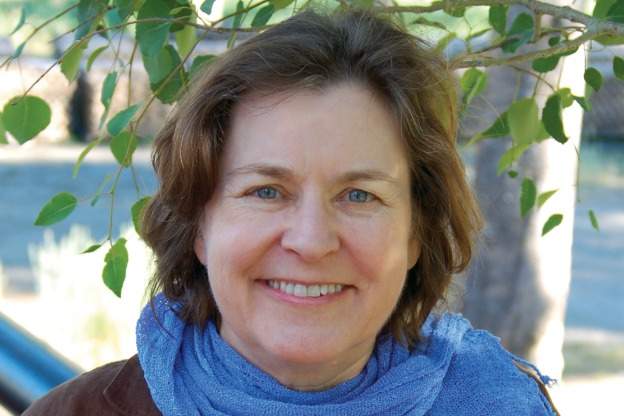 Karen Joy Fowler has achieved the literary Triple Crown. Her 2004 novel The Jane Austen Book Club was a bestseller, and was made into a big budget Hollywood movie. But she's also critically acclaimed. In addition to several fantasy and science fiction awards, the Bloomington native has added the 2014 Pen/Faulkner Award for Fiction to her pedigree for her most recent novel We Are All Completely Beside Ourselves. Presented since 1981, Pen/Faulkner has previously recognized such literary giants as Philip Roth, Annie Proulx, E.L. Doctorow, and Sherman Alexie.Â Two days after accepting the award at a May 10 ceremony in Washington, D.C., Fowler Skyped with us from her California home.

YaÃ«l Ksander: You've written in so many genres, in fantasy, and science fiction, but with We Are All Completely Beside Ourselves, you've come back to territory that is relatively much more familiar, and one might even say autobiographical in parts. It's set in Bloomington, where you spent the first decade of your life. Tell me why it felt right to come back from outer space to Bloomington Indiana, your home town.

Karen Joy Fowler: I think that because I left Bloomington when I was eleven, it remains in my mind as a kind of magical country. It's the country of my childhood. I've set short stories in Bloomington; I'm always happy in that landscape. But this book in particularbecause it dealt with animal research and with psychologists, and my father was a psychologist at Indiana University who worked with ratsit just seemed to me there would be no place more natural for this story to occur.

YK: Since you were a faculty kid here in Bloomington in the 50s, were you aware what a cauldron of scientific research the place was at that time at that time-I know it was just after Kinsey and Skinner. As a kid, did you have these people coming over to the house?

KJF: I did know about the psychology department. I knew that it was a very well established psychology department and that my dad was very excited to be part of it. And yes-mostly we had grad students to dinner, but we did quite often have someone from the psychology department over. And I do think in that childhood osmosis sort of way, just being at the dinner tableeven though I was 5 or 6 or 7and hearing the conversations, made me comfortable with thinking about the concepts of psychology when I came back to them, as an adult, which I did, mainly for this book.

Beyond simply providing the milieu for Fowler's novel, IU's psychology department was the site of the historic experiment that inspired the book.

KJF: It was inspired by an experiment done by another IU psychologist, Winthrop Kellogg, although he was in Indiana much earlier than we wereI don't believe we overlapped at all. Still, the story of his experiment is something I heard-I can't tell you how young I was the first time I heard it-so, these stories and this landscape are all part of my childhood. I loved Bloomington and left it very, very reluctantly at age 11. I was just as crabby as I could make myself be about it.

Bloomingtonians, especially those in the university community, will enjoy the references to such familiar landmarks as Ballantine Road, the "hippie school on Second Street", WIUX and even, a veiled reference to the Sarkes Tarzian estate at Deer Park. The late Professor Henry Remak, the pioneer of Comparative Literature at IU, guest-stars as himself. Dr. Remak and his family were Fowler's next-door neighbors, and kept in touch with her throughout their lives. Yet for all the familiar territory, this story is really a doppelgÃ¤nger to Fowler's own biography-a strange twin that is simultaneously like and unlike her own life story.

YK: We've talked about this being autobiographical, but there is of course an extremely bizarre element to your story that makes it almost like science fiction. And it's a surprisewe don't learn about it until page 77. But a lot of the press for the book kind of spoils the surprise. Did you hope to keep that secret when you were writing, or did you know that that was just hopeless?

KJF: Truly I didn't think about it at all, but it seemed to me the only way I could tell the story. I did imagine the reader coming to the book with no information and starting to read on page one and hopefully being surprised about a quarter of the way in, but once I turned the book in, it became very obvious how difficult keeping that secret was going to be while still trying to review the book and promote the book. I have had many readers tell me how glad they were not to know the surprise before they started, but I have also had readers tell me that they did know, and they didn't feel the book was spoiled by it. It's not really about the surprise, in the end.

Nonetheless, far be it from me to spoil it. Suffice it to say that the surprise carries the metaphor of the strange twin, the doppelgÃ¤nger, to its logical conclusion. The uncanny double who is so like us that we are disturbed by the difference, and what it says about everything we consider familiar, our self. Fowler uses the trope of the twin to explore the idea expressed in the old-fashioned idiom that lends the novel its title-this idea of being "completely beside oneself". Early in the novel-and this is not the surprisewe learn that the protagonist, Rosemary, was raised with a twin, whom she lost.

KJF: Rosemary is also just a very divided self in so many ways. She says at one point that she was a completely different person with Fern than she is now without Fern. And that any memory in her childhood-she knows if it happened before Fern left or after because she knows who she was in the memory and she became a completely different person. So a lot of what she is dealing with in telling her story is trying to recoverto put the two halves of herself back together as well as trying to relocate her twin, and repair the family around that relocation as well.

YK: There's kind of an uneasy resolution there at the end. Not to give it away, but it's still a family divided at the end of the book, but there is healing. How'd you make that choice?

KJF: I always wish at this point to point out that much of the book is quite funny! If you haven't read it yet, there are very funny bits, I hope, but some of the issues are very painful. I tried to give the book the happiest ending I could believe in. I did not wish to go into a realm that did not seem plausible to me. But man, I could've made the ending a whole lot worse than I did.

YK: Yeah, I was bracing myself for a whole lot worse, so it came as a pretty nice surprise. Congratulations on the award, Karen.

KJF: Thank you so much. Say hello to Bloomington for me.