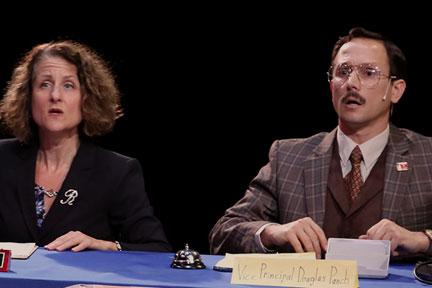 IU's Summer Theatre opened  all three of their shows this past weekend with the gently probing Our Town, the sometimes raucous musical The 25th Annual Putnam County Spelling Bee, and the comedy of a mystery character The Foreigner. All three continue in rotating repertory through the month. The whole company appears in Our Town and splits up for the other two shows.

I'm spacing my theatre going this summer, and Saturday at the Wells-Metz Theatre, I was up for the spelling. The set is designer Dan Tracy's vision of the Putnam County middle school gym. It's complete with basketball goals, pennants, and bleachers for the spellers and a simple table for the judges. The show is in the round and they actually move everything a hundred and eighty degrees a couple of times to give everyone in the audience a variety of views. By the way, there is a Putnam County, Indiana but none of the middle schools has a piranha cannibal fish as their mascot.

Marya Grandy plays Judge Rona Lisa Peretti. She's a successful area realtor and a past competitor with fond memories of her winning word "syzygy." Jay c. Hemphill plays the other judge, Vice-Principal Douglas Panch. The audience got a good laugh when he was announced as a fill in for the Principal, stuck in construction on Indiana 37. Sean Blake appears as Mitch Mahoney. He's a rough fellow on probation.  Mahoney is equipped with balloons, dictionaries and juice boxes for the losing contestants as the contest's, comfort counselor.

The six contestants are quite a collection. Chip Tolentino, Cole Winston is a former winner who'll be upended by puberty. Logainne Schwartandgrubenierre, Casey McCoy, later simply called ‘Schwarzy' is tense young woman with two fathers. Leaf Coneybear, Justin Smusz makes his own clothes and seems to spell in a trance. Will Barfée, (everyone calls him barfy) Mathew Weidenbenner was last year's runner up, back to right the past year's wrong. Marcy Park, Nina Donville is everyone's overachieving achiever….six languages, martial arts, ballet, etc., etc. Olive Ostrovsky, Katie Swaney is the sympathetic red head without the entry fee, whose mother is in an Ashram and whose father always works late.

By the way, four members of the audience, each of whom is gently and amusingly abused, are chosen to add to the evening's fun.

The 25th Annual Putnam County Spelling Bee does a very nice job of introducing each character and letting us get to know their strengths and their quirks. Olive sings of her friend the dictionary. Coneybear laments that his family doesn't think he's "that smart." Chip goes down to defeat at the onset of a distracting pubescent moment. Barfy, Barfée displays a magic foot for spelling. Mitch, the comfort counselor has an eloquent prayer. Schwarzy has a bit of a meltdown and is coached by both fathers. Marcy, actually receives thoughtful counsel from Jesus Christ, Chip in a wig,  purposely misspells and puts on a show of language and physical arts. Olive is comforted by a vision of her mother and father, Judge Rona in a sari with Judge Douglas at her side.

There are a lot of laughs in the show, some with nicely thought out local angles. Throughout there are many involving individual character moments  and there are plenty of energetic and swirling movement for all where this very strong cast gets to show off their dance chops. The singing is very strong with special applause for Sean Blake and Marya Grandy.

The 25th Annual Putnam County Spelling Bee is directed and choreographed by new IU faculty member Richard Roland. Musical preparation and direction from the keyboard is by Hana J. Cai. Costume design is by Linda Pisano. Lighting design, including the clever use of spots in in this tight setting, is by Allen Hahn. Helping us hear all the words, in balance is the sound design of Andrew Hopson.