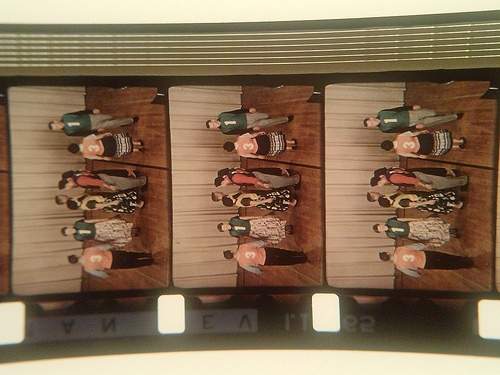 "Orphan film" is a name that might bring to mind a silent movie about children with smudged faces huddled on a train platform. But that's pretty far off. The Orphan Film Symposium is a bi-annual gathering that has been celebrating abandoned and forgotten films since 1999. This year, Indiana University presents the inaugural Orphans Midwest Film Symposium.

[Orphan films are] in this world where there is no natural caretaker for them.

So how does a film qualify as an "orphan," anyway? These are "films that are in copyright limbo, where we don't know their copyright status or perhaps they've gone into the public domain," explains Dan Streible, a professor of film studies at New York University and the founder and director of the Orphan Film Symposium. "So they're in this world where there is no natural caretaker for them." In a broader context, Streible explains, this essentially means any kind of neglected film â€“ "everything but commercial cinema."

It's highly likely that [the film being screened is] something 99% of the audience have never seen before and probably never heard of. So there's a real sense of discovery.

Forget the cinematic standards you might associate with "well-crafted Hollywood films or art films". The genre of "orphan film" â€“ and the symposium itself â€“ comprise a motley assortment of ephemeral celluloid from old educational films to unused film clips to documentaries with untapped research potential. Streible notes that the result of this enormous depth and variety of the genre means that during screenings at the symposium, "it's highly likely that [the film being screened is] something 99% of the audience have never seen before and probably never heard of. So there's a real sense of discovery [for the audience]."

One of the orphan films being shown at Orphans Midwest this year is actually a new film. Bill Morrison is a director who cuts together old, decomposing film with the intention of bringing out the beauty of those imperfect pieces. His new film, All Vows, is a film written for cello that will be accompanied by the music of cellist Maya Beiser during the screening.

However, just because a film is an orphan doesn't mean it will be shown at the symposium â€“ in the end, there are orphaned orphan films that do not make it to the screen. Streible says that there are a few specific qualities that make an orphan film a good candidate for the symposium: uniqueness (if the film is literally the only copy in existence), and whether there is some sort of advocate for the film.Â Every film screened at the symposium is introduced by someone, whether that person is a scholar, archivist, media artist anyone who can explain the value and story behind the piece.

A Special Home For Media Artifacts

Rachael Stoeltje, a film archivist with IU Libraries, explains that IU is an ideal place for the symposium. The institution has a rich history when it comes to educational films: "IU was a distributer [of educational films]," Stoeltje explains, "which meant that school systems and universities all over the country could rent a film and then IU would ship it to them. So all the films that were used in classrooms." Stoeltje says that IU's massive collection includes everything from "social guidance films" (teaching teens how to navigate the uncharted waters of dating) to National Education Television films (the precursor to PBS).

Streible adds that IU's preservation of its collection is rare: "Indiana University has done something that almost every other institution has not done, which is to look at the large collection of media artifacts and to â€¦[decide that] this is part of our institutional legacy â€“ We're going to invest in preserving it and making it accessible in new digital formats."

You can purchase 3-day passes for the entire Symposium, 1-day passes, or tickets to see just one film.