The World Of The Mexican Blind Cavefish 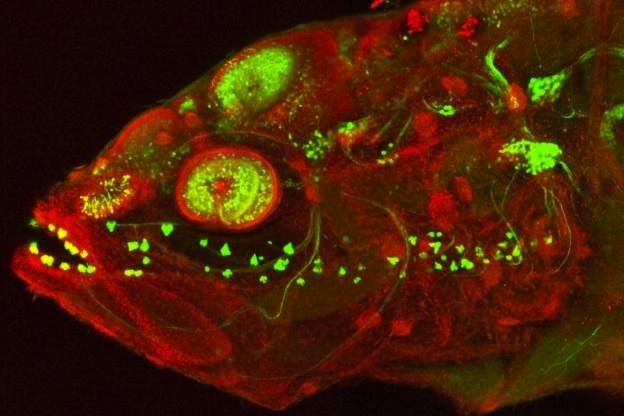 Like our primate relatives, we are highly visual animals. More than any other sense, we depend on our sight to tell us about our surroundings.

Some animals, however, live in a very different world. Suppose you had spent your entire lifetime in total darkness. Suppose your ancestors had lived in darkness for almost a million years. This is the world of the Mexican blind cavefish.

This unique animal whichÂ inhabits a system of subterranean caves in central Mexico Â evolved from a sighted ancestor that lived near the caves in surface waters. As these surface forms adapted to the special demands of cave life, the species lost its ability to live in the sunlit world above. Unable to spread from its home system of caves, it is found nowhere else in the world.

How does the cavefish find its way in the dark? The fish has a sense that people and all other land dwelling animals lack. This sense is called the lateral line, and is found in most fishes. On the surface of their skin, and in a system of canals just below their skin, fish have tiny sensors called neuromasts. These sensors detect water movement, and water pressure differences over their bodies.

As a fish swims it creates a field of water flow around its body. This field is distorted by obstacles and features in the fish's surroundings. The fish's brain processes signals from the neuromasts, allowing it to sense its surroundings. This sense is highly developed in blind cavefish. Just as we humans rely on vision, these animals rely on their lateral line to make a comfortable home in the dark.