Why Cigarette Smoke is Blueor White 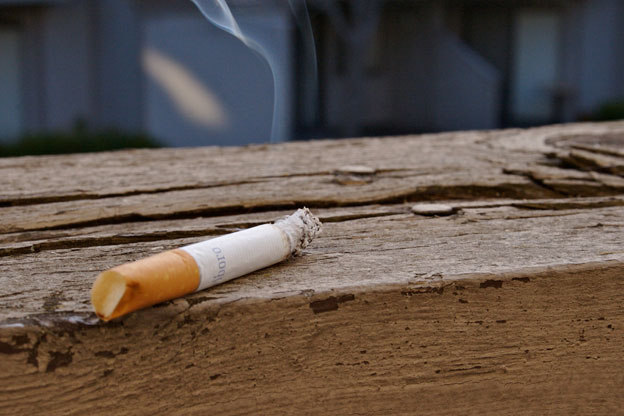 When someone is smoking a cigarette, aside from the hacking and coughing, have you ever noticed that the smoke curling off the tip of the cigarette is blue, but when the smoke is exhaled it's white? We know that some nasty things are happening to the lungs, but why does the smoke change color?

Because the particles are so tiny, when most light waves strike one of them they are not reflected back like a bouncing ball, but only slightly deflected from their paths. This is called "scattering."

The various colors of light have different wave lengths, and the ones toward the blue end of the color spectrum are the shortest. So, the short, blue waves are scattered about more by the tiny smoke particles because they are closer to the same size.

Since mostly blue waves are scattered about the area, we see the smoke as blue. Most of the other, longer wavelengths go almost straight past the particles and we don't see most of them.

Smoke particles that are sucked into the lungs are a bit bigger because they are not burned down completely. Many of them will remain in the lungs, hidden from the world until the biopsy.

Many are exhaled, though, and when they come out they have changed again. While in the lungs, and on the way out, they pick up moisture so they become bigger still.

The particles are now big enough to reflect all wavelengths of light equally. When all the wavelengths are reflected back they make white light, and so the smoke looks white.