The Bright Spots of Ceres 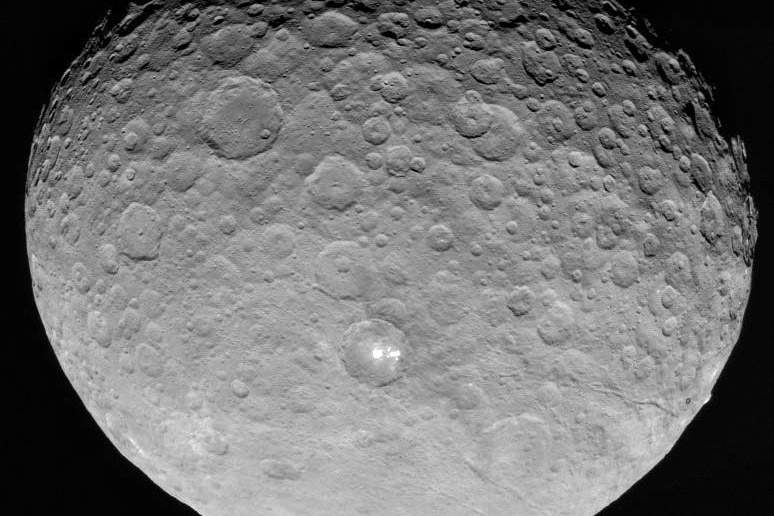 NASA's Dawn spacecraft was the first to explore the dwarf planet Ceres.Â In some ways, Ceres is exactly like what scientists expect for a small planetary body.Â Its surface is dark colored, with lots of craters produced by impacts.

Ceres is too small for its gravity to hold a permanent atmosphere. In the near vacuum on its surface, any liquid water that didn't freeze, would immediately boil away.

But one of the surprising discoveries Dawn found is that water might be trapped beneath the surface and protected from the vacuum. Even though Ceres is almost three times as far from the sun as Earth, there's evidence that the water might be liquid. Remember, life, as we know it, requires liquid water.

Why is it so bright?

Ceres has several very bright spots that reflect sunlight much better than the rest of the surface. In 2016 an international team of scientists published an analysis of the composition of the spots using Dawn's instruments. Their dominant mineral is sodium carbonate.

Sodium carbonate is formed in liquid water. It's deposited when the water evaporates. Its presence tells us that there was hydrothermal activity, such as geysers of liquid water, on Ceres in the geological past.

This means that the interior of Ceres, at least sometimes, is warm enough for water to exist there as a liquid. There might be accumulations of liquid water under the surface; maybe even an ocean. And wherever there is liquid water, there might be life.

Note: This Moment of Science was originally written and recorded in July 2016 before several studies were released in September 2016. If you want to learn more about Ahuna Mons (Ceres' one mountain and that may have at one time spewed chlorine salts), the discovery of water ice, thoughts about its potentially not temporary atmosphere, and more, read: "Six Studies Provide New Insights into Dwarf Planet Ceres."