TRAPPIST-1 Planets: Too Much Water For Life? 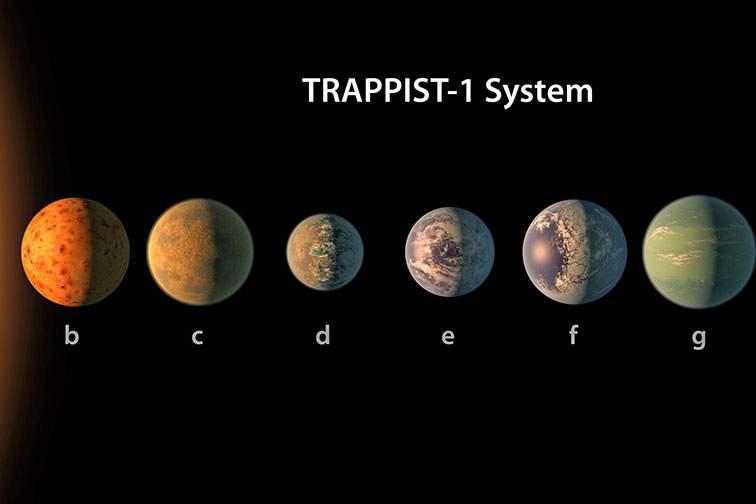 Astronomers have discovered seven planets roughly the size of Earth orbiting a dim red star called TRAPPIST-1, just thirty-nine light years away. Whatâ€˜s exciting about this discovery is that three to six of the planets may be within the starâ€˜s habitable zone.

The habitable zone is the range of distances where temperatures are just right for liquid water on a planetâ€˜s surface. These planets could be a lot like Earth.

But, just because a planet might have liquid water, doesn't mean you should jump to the conclusion that it is anything like Earth.

In 2018, a team of American astronomers published an analysis of the size and mass of the TRAPPIST-1 planets and argued that at least four of them have a density much lower than a rocky planet such as Earth. Although there are also other ways of accounting for this low density, the researchers hypothesized that it could be explained if, instead of rock, as much as half of the mass of some of the planets were water.

So, these planets could be entirely covered with deep oceans. And beneath those oceans could be a thousand-mile layer of a special form of ice that forms at high pressures.

Even though we often say that the key to finding life elsewhere is water, it's actually more complicated than that. The layer of ice, if it exists, might prevent substances necessary for life as we know it, like carbon and phosphorous, from reaching the global ocean. So, the odds are low that those planets host alien civilizations or simple forms of aquatic life.

So, yes, it is possible for a planet to have too much water for life.