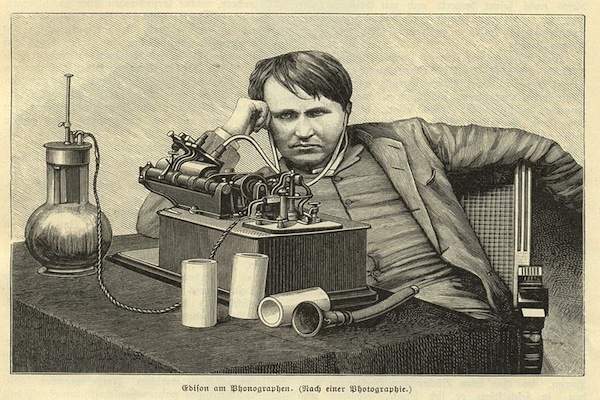 Ask any second grader about Thomas Alva Edison, and they'll know he's the guy who invented the light bulb.* They might even know he was responsible for the phonograph and one of the first motion picture cameras.

Here's some trivia they probably won't tell you, though. Edison was also the first person to kill an elephant with electrical current.

Around the turn of the last century, a bitter feud broke out over which electrical delivery system would supply power to the world alternating current (AC) or direct current (DC).

In the AC corner was Nikola Tesla; Edison fought for DC.

Having no qualms about fighting dirty, the latter embarked on a rather macabre smear campaign, using AC to publicly zap stray dogs and cats to death. The idea he hoped to get across was that Tesla's current was much more dangerous than his own. (Not true, but, again, the man had no qualms.)

Meanwhile, there was an elephant named Topsy who'd been engaging in her own lethal mischief. While employed as a beast of burden on Coney Island, she killed three men, which made her human handlers very unhappy. The murderous pachyderm had to go.

When poisoned food failed, electric shock, apparently, seemed the next best option. And so, on Jan. 4, 1903, a crowd of more than 1,000 spectators gathered to watch as Topsy was connected to high voltage electrical current and executed.

Worst part of it is, Edison used one of his fancy new cameras to film the whole thing. I've included a link to the footage below, but be warned: you will see an elephant convulse, become shrouded in smoke, keel over and die.

I don't think George Washington Carver ever did anything nearly this bad to promote his peanut products.

* It's worth noting that Edison's incandescent bulb was not the first ever made.Â Earlier attempts just didn't work very well.