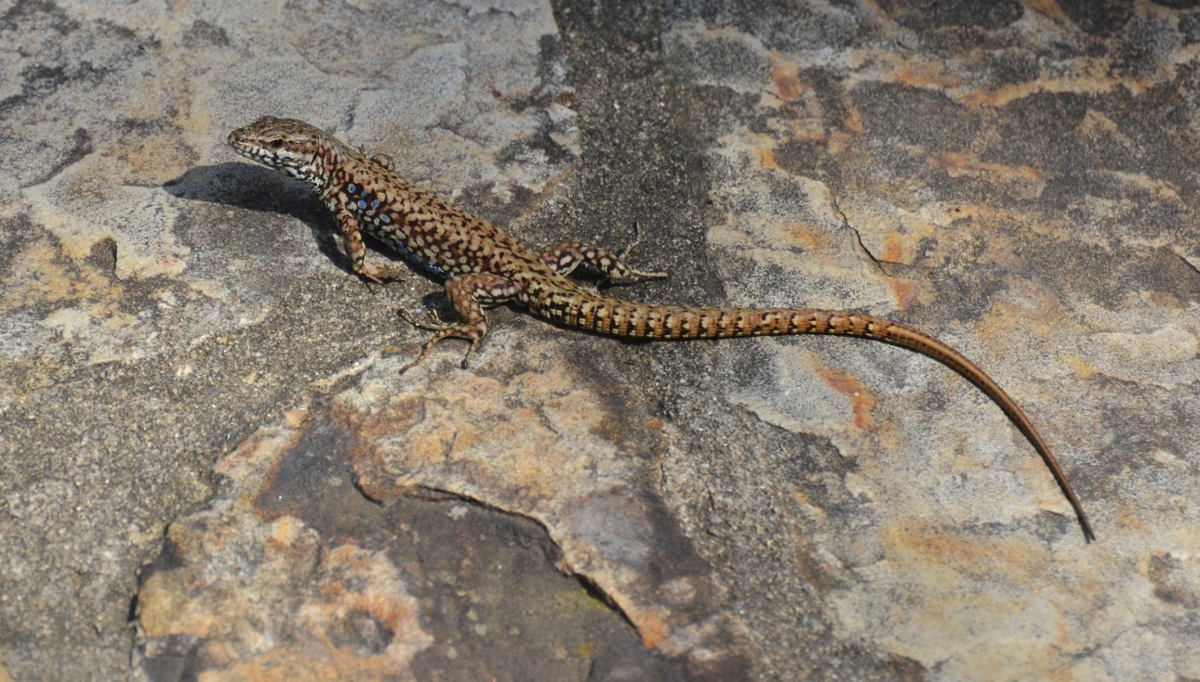 The Lazarus lizard is also known as the common wall lizard outside of Cincinnati. (Tony Alter / flickr)

Around 1951, a 12-year-old boy and his family returned home to Cincinnati, Ohio from their vacation in Italy. Wanting a souvenir of the trip, the boy had stuffed around 10 lizards into the socks in his suitcase to bring home with him. The lizards not only managed to survive this journey, but thrive in their new home. Today, they’re easily spotted in the city and surrounding areas.

The Lazarus lizard, surprisingly named after the family responsible for their relocation and not their ability to detach and regrow their tails, has become part of the city’s identity. Lazarus lizards are found in murals, on carousels, and the original neighborhood they were introduced to is often unofficially marked on maps as Lizard Hill in their honor. And while their origin story might sound like a local legend, it has actually been proven as scientific fact.

George Rau, stepson of Fred Lazarus III, came forward in 1989 as the one responsible for transporting the lizards. George’s account of what happened matched up to what researchers were able to determine themselves, but it wasn’t until 2013 when University of Cincinnati biology student Cassandra Homan compared the genetic profiles of the Lazarus lizards in Cincinnati to those in Europe that the truth became clear.

Homan’s research showed that not only were the Lazarus lizards related to the common wall lizards of Milan, but there was also “a very significant bottleneck” in the genetic diversity found in the US, which is attributed to having a very small starting population. It’s estimated that not all of George’s lizards survived long enough to reproduce, and the data suggests the genetic diversity only comes from 3 of the original 10. The most genetic diversity that is present was found around Lizard Hill, which further supports it as the original introduction site. There have been an estimated 33 generations of lizards from the first introduction of the species to Cincinnati, and because such specific information is known about their arrival the lizards have been a valuable case study for researchers looking into evolution.

While the area has embraced the Lazarus lizards, they are still technically an invasive species. He might not have realized it at the time, but 12-year-old George was lucky he didn’t alter his home’s environment even more than he did. The climates of Cincinnati and Milan are actually pretty similar, so the lizards were able to easily adapt to their new home. But more importantly, their introduction also didn’t really present a threat to the species already present in the area.

This video from cincinnati.com explains how locals view their invasive neighbors.

Lazarus lizards don’t really have any unique predator or prey relationships compared to other species in the environment, meaning they aren’t interfering with their neighbors’ resources. Researchers believe there was an "environmental niche" that wasn’t filled before the lizards were present, so their introduction was relatively smooth. Still, the purposeful introduction of Lazarus lizards to new areas is illegal, in case their introduction to a new area has more drastic results. This has definitely been the case in British Columbia.

Around 1967, Rudy’s Pet Park in Saanich was home to about a dozen Lazarus lizards, or common wall lizards as they’re referred to outside Cincinnati. Somehow, either accidentally or purposefully, the lizards were released from the zoo and spread much like they had in Ohio. Unlike their last introduction, the common wall lizards did not integrate smoothly into the neighborhood. Today their numbers have skyrocketed to anywhere between 500,000 and 700,000, and while that’s a smaller population than the estimated million in Cincinnati, these lizards have a much greater impact on their surrounding area.

Predators are unable to keep up with the population, and the lizards are feeding on pollinating bees, snakes, and potentially other endangered species native to the area. Their territory is also increasing almost directly due to human involvement. Kids with George’s same instincts try to make them pets and carry them home, or the lizards hitch rides on shipping trucks and end up in a new environment. There’s currently no government plan to curb the growing lizard population besides reporting sightings to the British Columbia Invasive Species Council, and research into the full extent of their impact is ongoing.

A scientist in British Columbia explains the impact the lizards have on the local environment in this video from CBC News.

While the impacts of the Lazarus lizard’s presence is obviously very different between Cincinnati and British Columbia, the similarities between their introductions is an interesting example of how humans impact our environment. When we think of our activities that impact Earth, we often think of the more abstract, faceless contributors of wide scale pollution and climate change. The case of the Lazarus lizard should not only serve as a reminder to consider how easy it is to unknowingly cause damage to an area, but also give us hope that individual actions can create a domino effect into positive change. If one 12-year-old boy’s vacation souvenir can change a city’s iconography, the possibilities for positive environmental impact are endless.