The Secrets Of Sandpaper 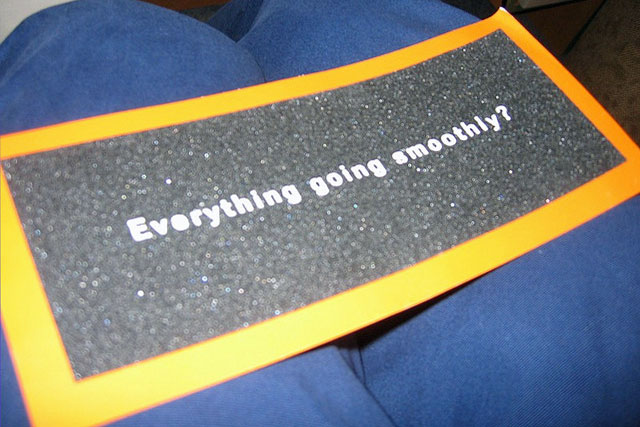 Once again, it's time to dip into the mailbag. Oh, here's a good one:

Is sandpaper really made out of sand?

Well, after checking with Alexander King at Purdue University, we found out that sandpaper, despite its name, isn't made of ordinary sand.

You see, sandpaper is made of abrasive minerals like aluminum oxide or garnet that are glued onto a paper backing. These minerals have sharp points or edges. That's why sandpaper is considered a cutting tool like a saw or a chisel.

When you push sandpaper cross a piece of wood, the abrasive grains cut tiny shavings out of the surface. To the naked eye, these shavings look like dust, but magnified, they're just like the shavings produced by other cutting tools. These shavings are called swarf.

The only difference between sandpaper and larger tools is that sandpaper can't be sharpened.

Now, if you look closely, you'll see that on some types of sandpaper, there are spaces between the abrasive grains. This is called an open coat, and it gives the scarf a place to go.

This is especially important if you're sanding wood, where the swarf particles are larger than they are for glass or steel. The spaces help prevent clogging by giving the swarf a place to go.

Finally, here's a neat sandpaper fact: some types of sandpaper have what is called a high degree of friability. This means that the abrasive grains fragment when heat and pressure are applied.

This creates new sharp edges, and allows the sandpaper to renew itself. Sandpapers that are friable last longer than those that aren't.

Purdy, Strother. "Making Sense of Sandpaper." Fine Woodworking. Accessed April 18, 2001. As of November 2016, you need a subscription to Fine Woodworking to access this article.