The Oldest Tree In Europe 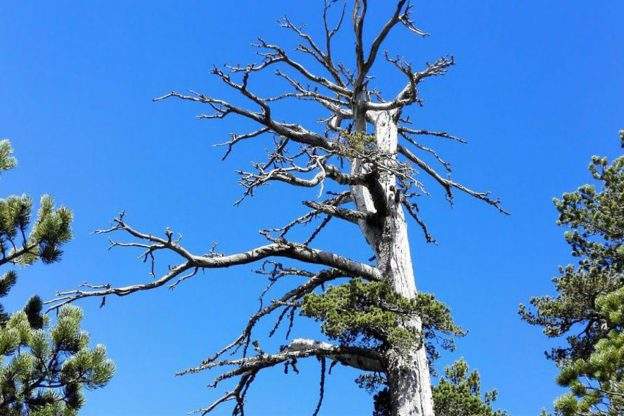 This Heldreich’s pine is the oldest tree in Europe. (Gianluca Piovesan)

Sitting on top of a rocky cliff in Italy's Pollino National Park is Europe's oldest tree.

To the untutored eye, the plant looks dead, but it's actually quite alive and healthy. In fact, considering that the tree is 1,230 years old, it looks really, really good.

Scientists from the Universita Della Tusoa in Italy have been studying the tree for a few years, but it wasn't until 2018 that they published the results of their analyses, showing its record breaking age.

Italus, as Italian scientists call it, is a Heldreich's pine. These trees are found throughout the Mediterranean, especially the Balkans. In fact, the second-oldest tree in Europe is also a Heldreich's pine. Named Adonis, this tree is 1,075 years old and lives in Greece.

As old as these trees are, however, they're nowhere near as old as the world record holders. The oldest trees in the world live in the U.S. states of California and Nevada, and have been going strong for over 5,000 years.

Determining the age of Italus was not so simple, however. First, the researchers used a method called dendrochronology, which is the standard way of dating trees. It involves taking a sample from the base of the tree and counting the number of rings from the center. Each ring represents one year of the tree's growth.

The researchers took such a sample from Italus, but it was only useful up to a point, since Italus is hollow in the middle. Still, this core sample told them that Italus was at least 1,062 years old. To determine just how much older the tree was, they took additional samples from its roots. These samples were analyzed using radiocarbon dating, and helped the researchers conclude that Italus was the oldest living tree in Europe.

As impressive as Italus' and Adonis' ages are, it might not immediately be clear what the scientific importance of their longevity is. Studying tree rings can tell scientists a number of interesting things about the natural world, though.

For example, research about tree longevity can help scientists better understand how ecosystems will be affected by global warming and allow them to develop better policies for conserving forests. This is because tree rings can give scientists useful information about growth rates, which in turn help scientists understand how droughts impact the lives of plants. This study is an example of the advances science has made in measuring tree growth, and is therefore a positive step toward better environmental policy.