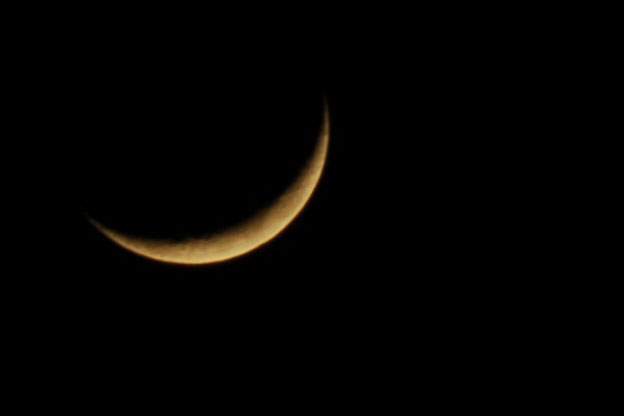 There's an interesting effect we can sometimes see regarding the moon. It happens when the moon is almost in the phase we call new, or when only a tiny sliver is visible shining on one side.

When that occurs, on a clear night you can sometimes see the rest of the moon glowing faintly. It's as if the part of the moon that isn't being hit by sunlight nevertheless is giving off its own dim light.

This is not the case, the moon generates no light of its own, but you can imagine how people once thought that perhaps it was always glowing faintly and we just didn't know it.

Why does the unilluminated surface of the moon glow a little just before the new moon? We already have a hint: we know the moon produces no light, but only reflects it. Where is that extra light coming from?

If you guessed the earth, you're right on the money. That faint glow is the moon reflecting earth light!

Think of it this way. When the moon is new, the sun is on the far side of it; that's why the half that faces earth is in shadow. If you were standing on the moon at this time, however, you would see the sunlight completely lighting up the earth, it would be a full earth!

Because the earth is larger, and has a cloudy atmosphere, it actually reflects about 70 times as much light as the moon does. A small portion of that reflected light bounces off the moon and comes back at us, giving that beautiful, faintly-glowing effect.